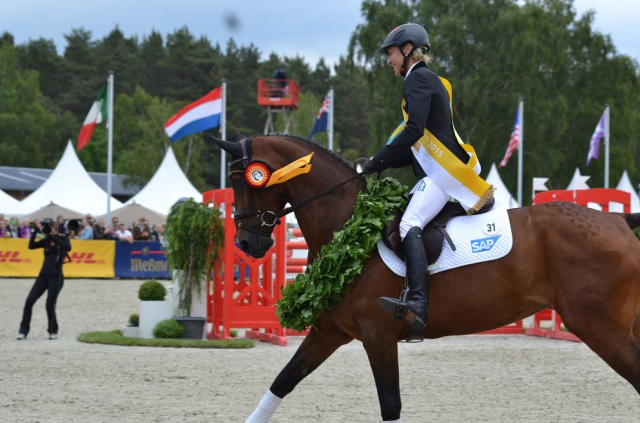 More on the glorious spectacle that is a German awards ceremony later. First, a rundown of the events leading up to Ingrid and FRH Escada JS‘s CCI4* triumph.

It took a hot minute for anyone to manage a double-clear trip around Captain Mark Phillips‘ testing show jumping course. At long last, Great Britain’s Nicky Roncoroni and her dreamy dapple-grey Stonedge broke the seal. 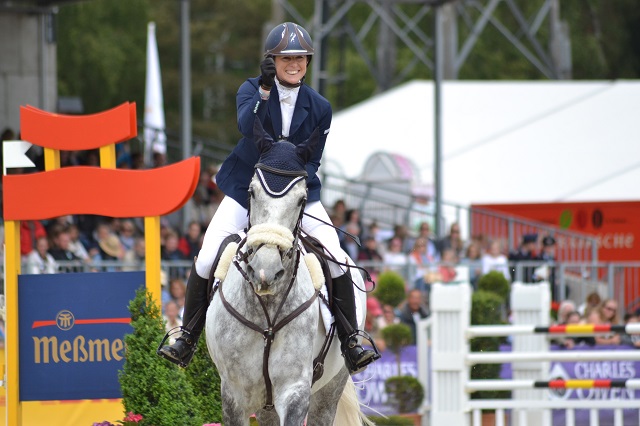 The double-clears began trickling in after that, beginning with Germany’s Dirk Schrade with Hop and Skip, who jumped from 13th to 8th, and culminating with six of the last seven pairs to go.

Canada’s Rebecca Howard had an unlucky rail but there was just enough scoreboard shuffling that she was able to hang on to her foothold in the top 10. Rupert looked keen and ready to jump some jumps; he had the expression of a kid tearing opening birthday presents throughout his round. Watching him you’d never know he jumped clear and fast around a 4* course the day before. 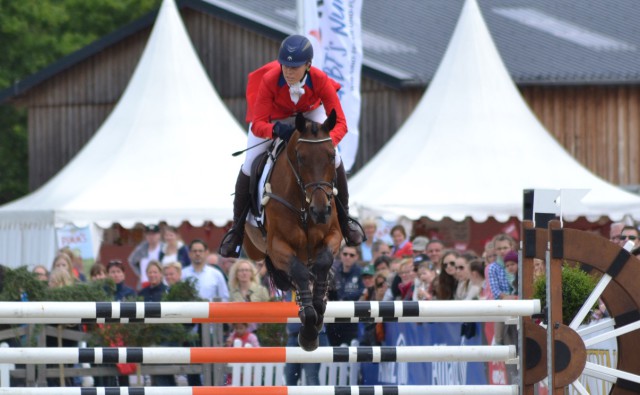 America’s lonely torchbearers, Clark Montgomery and Loughan Glen, enjoyed a brilliant finish to their brilliant comeback weekend. Glen jumped his heart out today, moving from 7th to 6th thanks to a double-clear round. 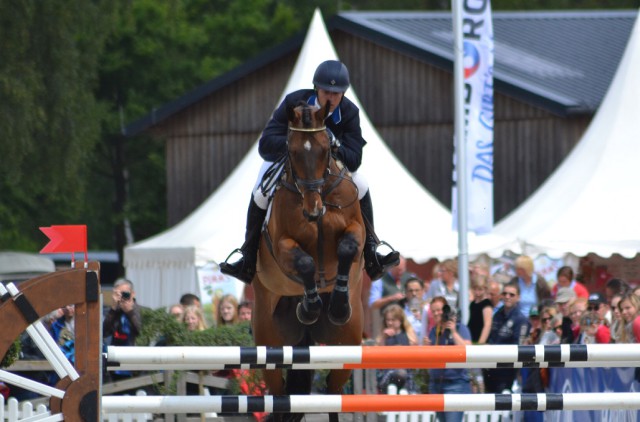 Clark told me Friday that he’d probably sat in a dressage saddle maybe, maybe, a dozen times since Boekelo last October, focusing instead on Glen’s jumping and fitness programs. Their hard work paid off this weekend, certainly, but can you imagine the result if this pair had actually put in some time on the flat?

Imagine this photo, flipped. (Clark, I’m sorry Glen’s naptime ears ruin all your pictures. At least he’s got a buddy in this one.) 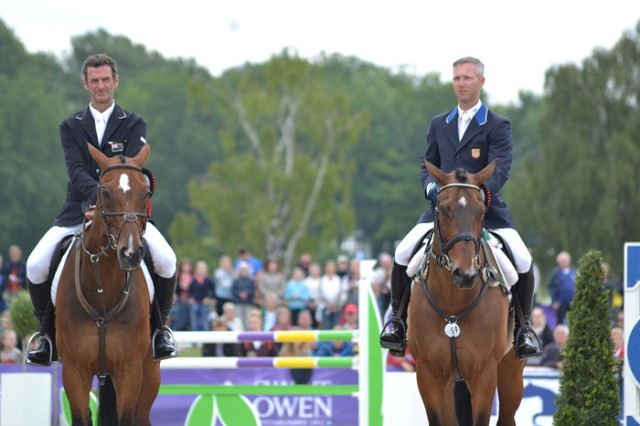 The remainder of the leaderboard stayed intact. It was beautiful round after beautiful round from Mark Todd, Christopher Burton, Michael Jung, Jonelle Price and, last but not least, Ingrid Klimke.

It was hard not to root for 3rd placed Michael and Sam, whose seem to float through life in a bubble of hearts. And 2nd placed Jonelle’s light-as-a-feather Faerie Dianimo is a treat to watch.

But if Ingrid won, I knew what was going to happen. And I wanted to witness it.

Germany was going to lose its mind completely. 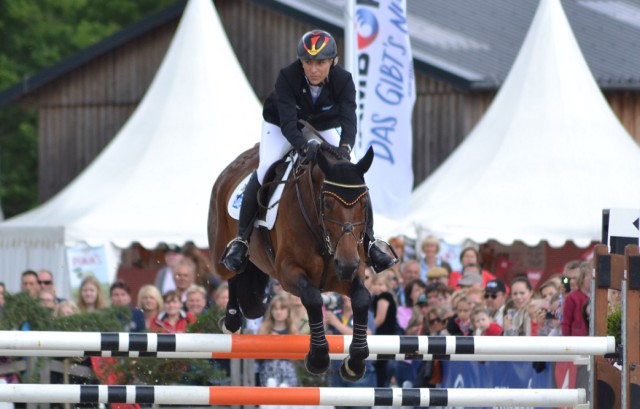 Wham, bam, thank-you-ma’am and what happened next was everything I dreamed it would be. Having experienced The Ingrid Effect yesterday on cross-country, I had the foresight to turn my iPhone video on as she was heading toward the final jump.

It starts with dead silence — OK, so you can hear a bird chirping somewhere and the girl beside me was quietly clucking — but as soon as Escada has all four hooves back on solid ground….

Making Ingrid’s win, on her dressage score of 32.7, even more special was her connection to the place. Her father Dr. Reiner Klimke won Luhmühlen 56 years ago, and her mare was also bred here in Luhmühlen by Jürgen Stuhtmann.

“It was meant to be” Ingrid said. “Escada was fantastic in every sense of the word and I am totally over the moon. Without her and my team I wouldn’t be here. With the show jumping we ended an amazing weekend. She was extraordinary — she never touched a pole.”

Jonelle and Michael were also thrilled with their horses’ performances.

Jonelle said that she was a bit nervous going in the ring.

“My horse is a very careful jumper and will always try her hardest, so any mistake would have been down to me,” she explained. “The time was very tight and having to ride against the clock is not really my thing, so I did feel the pressure today. Therefore I am even more pleased that we stayed clear within the optimum time. All the top riders were extraordinary this weekend and I am extremely proud to be one of them.”

Of his tremendous partner Sam, Michael said, “I am completely happy with Sam’s performance this weekend and we couldn’t do more in the end. The ladies fully deserved to come first and second.”

When Ingrid trotted back into the ring to accept their honor, the real party began. Exhibit A: the awards ceremony. 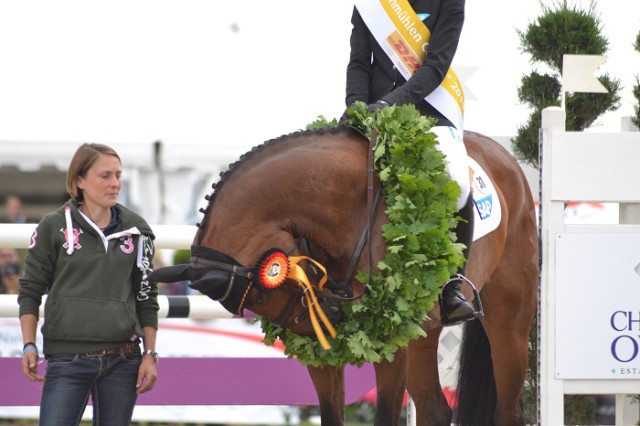 Is this thing edible?

They just kept bringing out prizes. 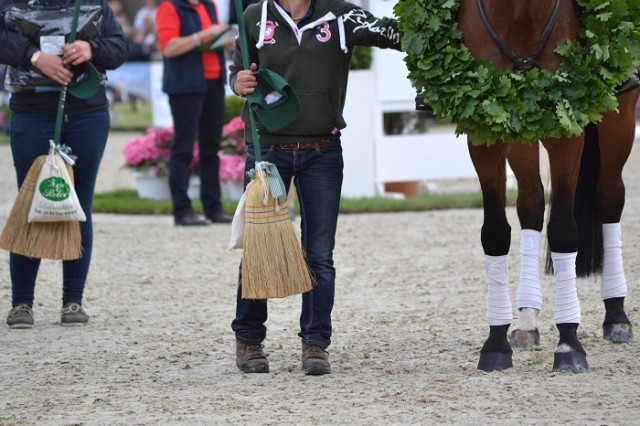 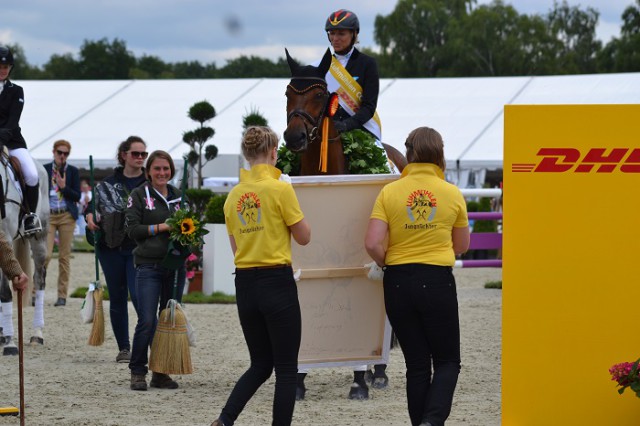 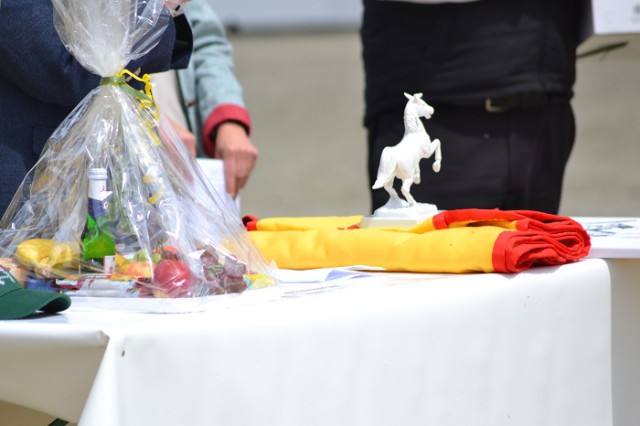 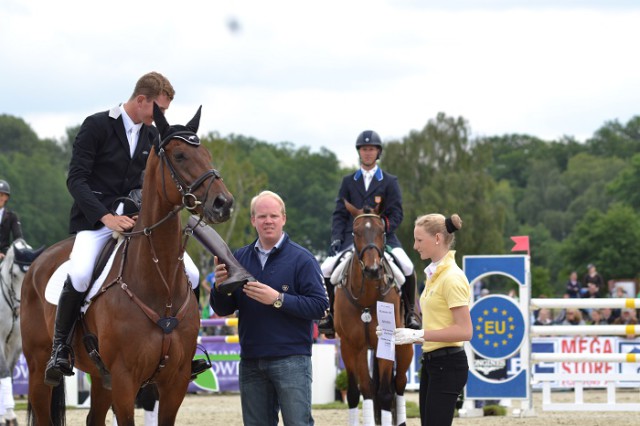 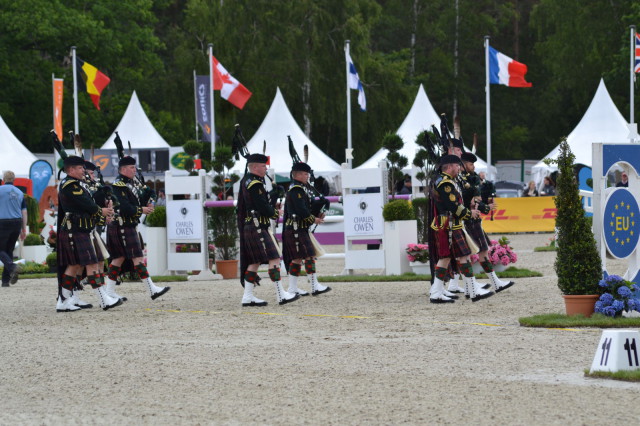 And then, out of nowhere, bagpipes. Because of course.

Maybe if I knew more German (or any German, really) I would have had a better grasp of what was going on. But I actually kind of enjoyed being in the dark, the only journalist doubled over with the suspense of not knowing what was going to happen next.

Adorable New Zealand photographer Libby Law later told me that if I thought German award customs were weird, I ought to see the French. Apparently they’re really into giving away kitchen appliances: microwaves, toaster ovens, the like. It makes that dinky watch at Rolex seem pretty boring.

And broadcast commentator John Kyle pointed out that America basically grinds to a halt if a horse wins three races. You’ve got a point, John.

And, most importantly… Go Eventing.