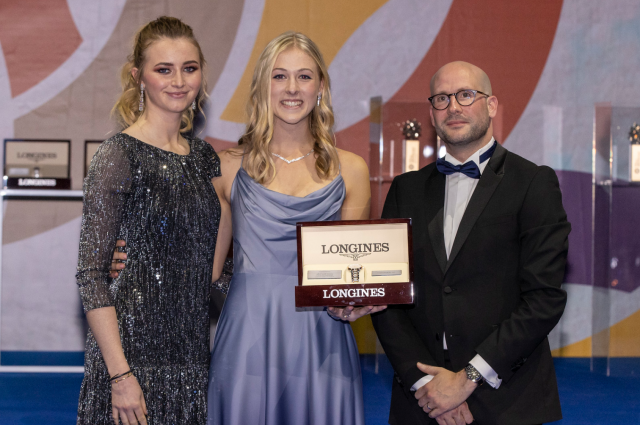 Eventers were well represented in the final nominee pool for the 2021 FEI awards: Julia Krajewski (GER) for Best Athlete, Greta Busacker (GER) for Rising Star, Stephanie Simpson (USA) for Best Groom and Laura Collett (GBR) for Against All Odds. All are deserving, but only one took home the top honor at the awards gala in Antwerp, Belgium yesterday evening: exciting German young rider Greta Busacker.

The 19-year-old took home this year’s Longines FEI Rising Star Award and a Longines timepiece. Individual and team champion at this year’s FEI Eventing European Championships for Young Riders, and bronze medallist at the 2021 German National Championships for Young Riders, Greta Busacker is quickly making a name for herself in the sport. Her win made the FEI Awards a decidedly family affair, with her mother and eventing legend Ingrid Klimke a recipient of the 2019 and 2020 Peden Bloodstock FEI Best Athlete Awards.

“I’m very pleased to receive the Longines FEI Rising Star Award. Words can’t describe how honoured I feel because there are so many young talented riders out there,” she said. “They work as hard I do and I get to stand here. This is for my whole team, my family, my friends. Without them I’d be nothing.”

She also paid tribute to her horse, the 10-year old Oldenburg gelding Scrabble, with whom she has been competing since 2019. “With Scrabble, I’ve learned to be patient. When I stand in the starting box and the countdown is on, I know that I can trust him one hundred percent. He has such courage and never gives up. Our connection is such a strong bond. Thank you Scrabble!”

“Young athletes like Greta are the future of equestrian sports and we are delighted and honoured to play a part in what we know will be a long and accomplished career,” he said.

“Longines presents an award which celebrates young talent, while telling their story of determination and passion for a sport. These young stars are the future of equestrian sports and we hope that they will continue to inspire budding equestrians around the world for many years to come.”

This year’s winners were decided by combining 50% of the public votes cast on FEI.org and on the Chinese social media platform WeChat, and 50% of the judges’ votes.

More than 300 distinguished guests, including local sporting legends, National Federations, FEI partners and stakeholders attended the 13th FEI Awards, with equestrian commentator Steven Wilde (GBR) acting as Master of Ceremonies. Also present in Antwerp were all of the 2020 Award winners from 2020 — Ingrid Klimke, Semmieke Rothenberger, Carmen Thiemann, Angelika Trabert, Ebony Horse Club and — who were invited to join in the celebration following the cancellation of last year’s ceremony due to the pandemic.

“This is the first time since 2019 that we have been able to celebrate the stars of our sport in person,” FEI President Ingmar De Vos said. “The global pandemic and the EHV-1 outbreak have been very tough on our industry, and I am pleased that we had the opportunity to bring together the community to celebrate these achievements tonight.

“This edition of the FEI Awards is special for me, not just because it is being held in a city close to my home in Belgium, but also because it is the FEI’s Centennial year. These Awards, and the high calibre of nominees every year, continue to be a testament to the growth of our sport and gives us great hope for the future.”

You can watch a replay of the awards gala here.