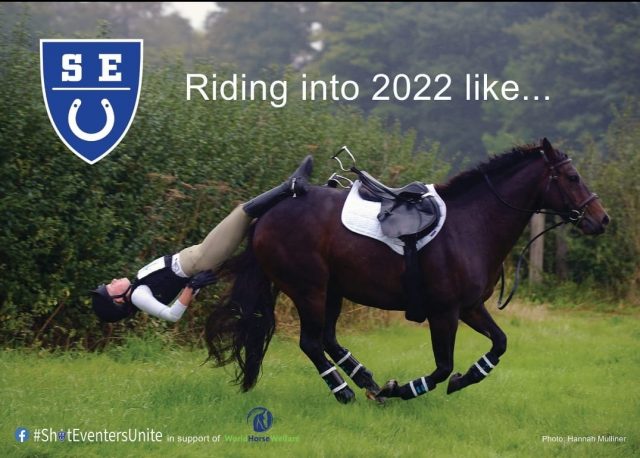 Unofficial promotion for my favorite Facebook Group, Sh*t Eventers Unite, as they’re raising money for the holiday season for World Horse Welfare by selling really fun branded goodies like sweatshirts, bumper stickers, hats, rucksacks, and even really nice thermal coats. Get one for you, and definitely one for a friend, and benefit horses worldwide by contributing to the charity efforts!

Quiet hands are key for athletes who reach the top of any equestrian sport. Their hands follow the horse’s head movement, maintaining the same amount of contact on the reins at all times. It’s no wonder that Beezie Madden can tell us how this can be achieved. “For the most part, it comes down to three things,” Madden said – basic position, basic flatwork and trusting the horse. [Riding With Quieter Hands: Beezie Madden]

How do you stay on top of your biomechanics at home riding alone? What if you don’t have a trainer on the ground? What are some ways you can pick up on little asymmetries or bad habits in the saddle? For part 2 of this short series on rider biomechanics with Noelle Floyd, you’ll get some excellent cues that will come in handy for building on the observations of Part 1. [How Do You Feel Asymmetry In The Saddle?]

Team GB’s Olympic eventers have been shortlisted for Great Britain’s Choice Award for their gold medal-winning performance in Tokyo. The award honours the “most memorable moment” from this summer’s Games, with 14 nominations in the running. Oliver Townend and Ballaghmor Class, Laura Collett and London 52 and Tom McEwen and Toledo De Kerser led throughout in Tokyo to take Britain’s first eventing team gold since 1972, ahead of Australia in silver and France in bronze. [Vote Now for Team GB Eventers]

Is your horse girthy? When tacking up many horses over my career, horses acting girthy has always made me suspicious. It’s not just a weird behavioral thing, it’s an expression of pain that we haven’t sorted out. I’ve long held the theory that girthy behavior correlates to either front end lameness, or ulcers, and now I’ve finally been vindicated by a study by researchers at the University of California, Davis. If your horse is girthy, don’t just ignore it, instead, you might consider looking into it more thoroughly. [Reasons for Girthiness]

Worrying about losing to a rider, or being beaten by another, is a common mistake many riders make. Wondering if you’re going to beat someone or be beaten by someone else is just as common. Together this kind of worrying and wondering is called the opponent effect and is one of the most obvious – and overwhelming – causes of show jitters and performance anxiety. [Pressure Proof with Daniel Stewart]