Joseph Murphy is returning to Horsepower Equestrian in Ocala in March, likely mid-month, for another cross country clinic. Dates will be confirmed soon. All levels welcome! Email [email protected] or WhatsApp +44 7799 096204 to reserve a spot. 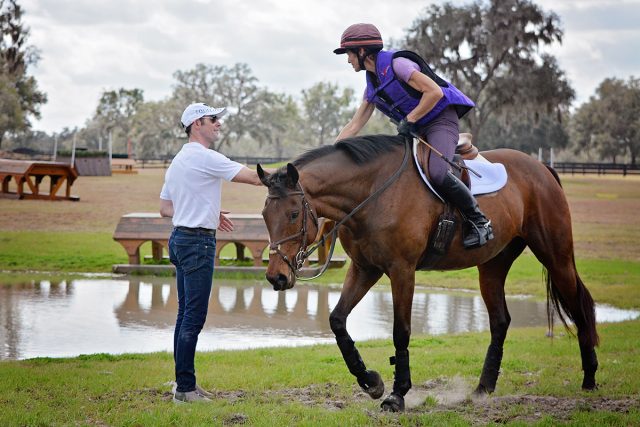 Lisa Hickey thanking Joseph after riding in the clinic with her 11-year-old Thoroughbred No Pips. Photo by Jenni Autry.

“You must think very strong in yourself as a rider. Think you can do it, and if you can’t, find a way to make it happen.” That is just one of many memorable quotes from Irish Olympian Joseph Murphy during his cross country clinic at Horsepower Equestrian in Ocala last week, and it captures the key theme that emerged over the three days: Internal confidence is king.

Joseph taught groups with experience ranging from Beginner Novice to Advanced level. After watching them jump through warm-up exercises, he quickly pinpointed strengths and weaknesses. He then coaxed each rider to challenge their own perceived limits of their ability, methodically preparing them to tackle more complex combinations and intricate questions as the lesson progressed.

The number of riders who jumped a certain type of fence or combination for the first time — and came away with beaming smiles — made this clinic a smashing success. I watched riders competing at Novice level jump through Preliminary combinations like total pros. I watched young horses grow up considerably over the course of one hour and mature by leaps and bounds when they returned for multiple days.

There is a bit of magic in the way the Irish ride cross country, and after auditing and riding in Joseph’s clinic, I can certainly say that extends to the way he teaches. Horses and riders consistently walked away from the clinic with an incredible confidence boost thanks to riding with one of Ireland’s best.

Joseph has an intriguing background. He grew up in Mullingar playing GAA football and only started riding when he was 16 years old. He cut his teeth catch riding for the Westmeath Fox Hounds, later earning his jockey license and winning at point-to-points. It was only when he met Danish event rider Dot Love that he started eventing, and he competed in his first three-day event at 23 years of age.

He has represented Ireland at the last four European Championships, as well as competed at the 2012 London Olympics and 2014 World Equestrian Games. He competed in his first CCI4* in 2011 and has since completed 19 four-stars, with multiple top-15 finishes at Badminton, Burghley, Luhmühlen and Pau.

Watch the video above of him riding Sportsfield Othello at Tattersalls CCI3*. Joseph is balanced, light and allowing in the way he rides cross country. His style is bold, and he expects riders to come into his clinics ready to rise to the occasion. A word to the wise: Do not ride in a clinic with Joseph if you don’t want to be pushed out of your comfort zone, and in some cases way out of your comfort zone.

Using myself as an example, I rode in a Training group aboard Jimmie Schramm’s former Advanced horse Bellamy, who at 18 years old is no longer competing at the upper levels and now enjoys taking off with me out of the start box at the lower levels. We had completed one recognized Training prior to Joseph’s clinic.

I’m extremely lucky to be riding this horse, and in my excitement over talking about Bellamy with Joseph, I made the grave mistake of telling him the horse was an experienced campaigner that had gone around Kentucky CCI4*.

My lesson was the last of the day, and I spent the morning auditing other lessons so I knew what to expect. After watching him send the Novice group through a combination of sizable tables, I started getting a bit nervous. When he started sending the Training group that rode before me over an Intermediate table with a sharp left-hand turn to a triple brush, I was expecting him to have constructed an exact replica of Becher’s Brook by the time I got on for my lesson. 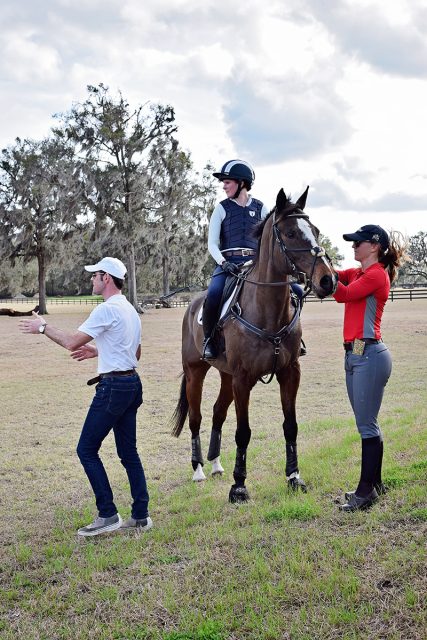 Joseph showing me the line to ride down the mound to the angled brushes. Photo by Grace Foster.

Joseph made it clear from the start that he expected us to ride accurate, straight lines at the correct pace. After riding around like a headless chicken through the first few warm-up exercises — all I could think about was where on the course he’d constructed that Becher’s Brook replica — I started seeing good distances and things clicked into gear. And that is when Joseph decided to let the former Advanced horse relive the glory days.

He explained each line he wanted me to ride through different tricky combinations with almost clinical precision. “Find the line, hold the line” had become our mantra for the clinic by this point. Joseph made me believe I could do it, and the stars aligned for what was easily the most educational cross country lesson I have ever had.

I went on to compete at Ocala Winter I Horse Trials at the weekend, and the fences on my Training course looked considerably smaller following my afternoon spent on Joseph’s playground. When I went out of the start box on Sunday, it was with a sense of confidence that can only come when you have taken on an immense challenge and come out on the other side feeling like you can conquer the world.

I am just one of the many success stories from Joseph’s clinic. Every single horse and rider I watched came away with a new set of tools to use with their horse on cross country going forward. The clinic proved especially helpful for horses and riders struggling in a certain area.

For horses with a bad habit of stopping at fences, Joseph explained that timing is critical when it comes to encouraging them to jump. “It’s the moment of being one second faster and then giving them a kick that they’ll remember for the rest of their lives. Your timing has to be perfection.”

He stressed our responsibility as riders, especially when it comes to ensuring that you present your horse to a jump in such a way that he is able to clearly read the question. “It is really important to make sure the horse sees the fence,” Joseph said. “If he stops because he couldn’t see the fence, that’s a rider error.” 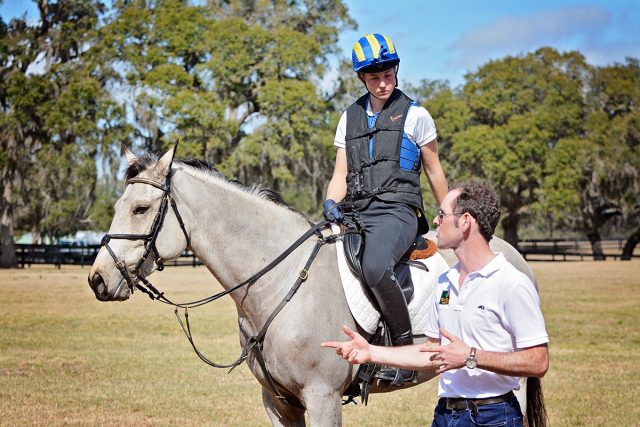 When one rider got off her line to a fence, resulting in an awkward jump, she said, “That was my fault,” to which Joseph replied, “It usually is our fault, isn’t it?” He added, “Be there when he needs you to put your leg on and help him. You have to be more proactive and keep the horse’s confidence up.”

In many cases, Joseph gave riders the chance to problem solve on their own, waiting to give them a specific piece of advice to see if they could figure it out first. When riders asked about striding in a combination, he would ask them how many strides they thought it should be. He is a strong believer in riding off feel rather than a number. “Let your eye do the calculation, then make your decision. You know from feeling what it’s supposed to be.”

If riders struggled with a certain line or combination, Joseph had them repeat it until they got it right. He would not settle for mediocrity or anything less than what he knew each rider and horse capable of achieving.

“Keep doing it until you’re confident he will take you down to the fence and you have an eye to make the distance happen,” Joseph said, adding, “If you leave a box unchecked, you’re going to get found out. Go through your program and become conscientious.”

Jimmie Schramm rode Eclaire, a 7-year-old German Sport Horse mare owned by Mark and Katherine Bellissimo, ahead of the mare’s move up to Preliminary at Ocala Winter I Horse Trials, and said she found the clinic educational for both herself and the horse.

“What I appreciated and noticed about Joseph is that he did not care what level the horse and rider were going. He watched each pair and assessed them as they warmed up through certain exercises and then challenged them appropriately,” Jimmie said.

“For most people I saw the challenge was way past what they thought themselves capable of, and more often then not the pairs overcame these challenges and left the clinic extremely confident. He methodically worked with every pair as he would if he were training his own horse, ticking off the boxes of what the horse and rider were proficient at and what needed to be addressed and worked through.”

Julieann Prettyman rode Cooley Mullingar, her 6-year-old Irish Sport Horse, in my group at the clinic ahead of their move up to Training level at Ocala Winter I Horse Trials.

“I have a talented young horse and sometimes I feel like I’m afraid to challenge him and ask tougher questions since he is still fairly young. Joseph gave me the confidence to not only ask harder questions and jump bigger things but also to make mistakes and embrace them as part of the learning curve with the younger horses,” Julieann said.

“His positive, gritty, ‘get it done’ attitude and methodical teaching pushed us to do things I never thought I could do, and without a doubt we left the clinic a stronger combination as a result.”

Whether you want to build confidence on cross country for yourself or your horse, sharpen your cross country riding skills, or simply have the time of your life jumping angles and combinations you never thought possible, Joseph is your man.

Following his successful clinic in Ocala, Joseph is already planning to return to Horsepower Equestrian in March, likely mid-month. Final dates will be confirmed soon. Email [email protected] or WhatsApp +44 7799 096204 to reserve a spot. All levels welcome! He is also looking to schedule clinics in other parts of the U.S. this year, so get in touch if you’d like to host Joseph.

Learn more about Joseph on his website and be sure to follow him on Facebook, Twitter and Instagram. We wish him all the best in the 2018 season and beyond! Scroll down for more photos from the clinic. Many thanks to Al and Liz Halliday-Sharp for hosting at their stunning facility, and to Andrew McConnon for helping to organize. Go Eventing. 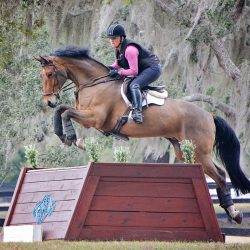 Jeanie Clarke and 7-year-old Famos 71 jumping into a combination, with a brush set six strides away on a sharp left bending line. Photo by Jenni Autry 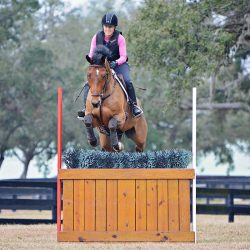 The key was to not jump too open over the table so you had plenty of time to make the turn to the brush. Photo by Jenni Autry. 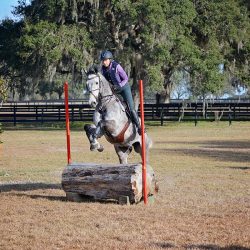 Linda Bammann and 7-year-old Calvin jump through a warm-up exercise of two angled logs set on three strides. Joseph wanted riders to find a straight line through both logs. Photo by Jenni Autry. 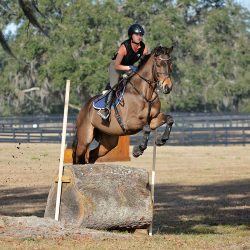 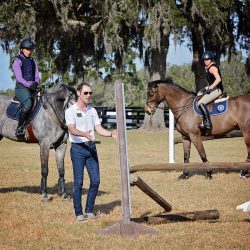 Joseph showing the Novice group the correct angle for jumping a corner. Photo by Jenni Autry. 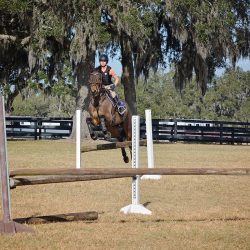 Grace Foster bang on her line for the corner combination. Photo by Jenni Autry. 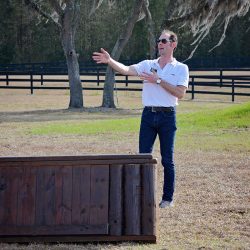 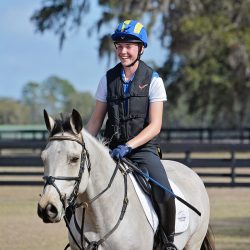 Jean Thomas all smiles after successfully tackling a combination with her 5-year-old Connemara/Irish Sport Horse Connor. Photo by Jenni Autry. 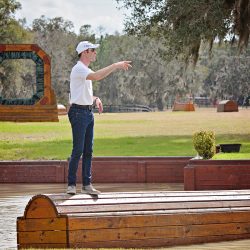 Joseph giving the riders a mini course to jump through the water complex. Photo by Jenni Autry. 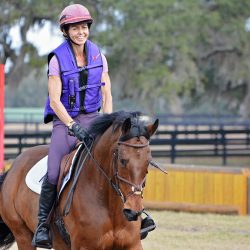 Lisa Hickey jumped a keyhole for the first time in the clinic and was all smiles. Photo by Jenni Autry. 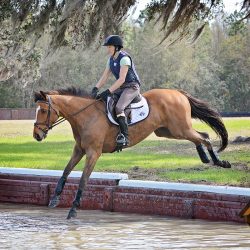 Michelline Jordan and Ryder Kay, an 8-year-old OTTB that raced until he was 5 and is a half-brother to her former Advanced horse Irish Diamonds. Photo by Jenni Autry. 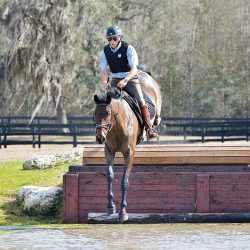