Per the terms of the bet, Joanie had to tell EN why the Eagles are the best football team. If the Patriots had won, Buck would have had to do the same for the Patriots in a press conference at the Land Rover Kentucky Three-Day Event.

This is not the first time Joanie has lost a football bet. Exhibit A: 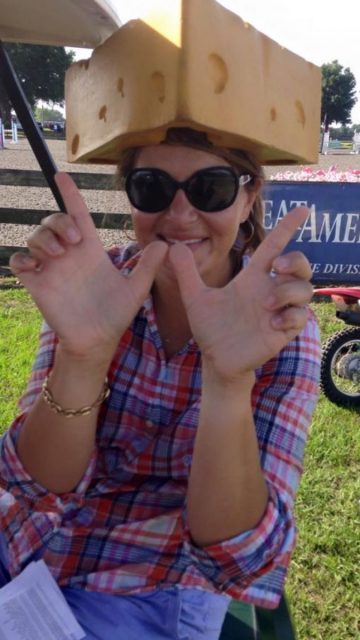 Without further ado, take it away, Joanie!

1. Because the Eagles have the most creative rally cry in football, the one where they spell their own name. E-A-G-L-E-S

2. Because aside from Buck Davidson, Phillip Dutton and possibly one or two other people — everyone else told me that the only team they like less than the Eagles is the Patriots.
CC: Jonathan Elliott

3. Because they represent a city and not a six state piece of heaven in the North East.

4. Because their victory exposed the fact that Jon Holling bet on a team other than the Green Bay Packers.

5. Because Buck Davidson is so overjoyed by this victory after a lifetime of pain and suffering as an Eagles fan that he won’t even mind paying Jon Holling the $50 that Jon made betting me on a team other than the Packers (!!!).