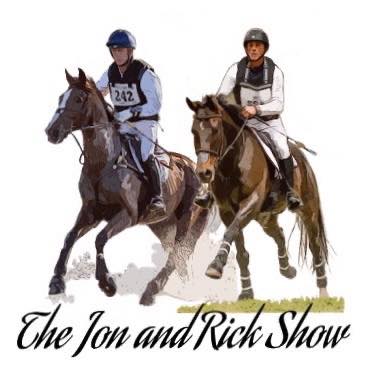 The Jon and Rick Show debuted to much appreciation from eventing fans the world over earlier this year, and this week the show takes on an even bigger presence as the newly refreshed Eventing Radio Show. You may recall the Eventing Radio Show with longtime hosts Max Corcoran, Joe Meyer, Liz Halliday-Sharp, and Paul Tapner — the most established show of its kind in the eventing space. Now, the show will go on with Jon and Rick at the helm supported by the Horse Radio Network as well as EQTV Network.

“I am excited to welcome some new voices to the Eventing Radio Show,” Horse Radio Network founder Glenn Hebert said in a press release. “Jon and Rick bring years of Eventing experience and terrific dynamic to the longest running Eventing podcast in the world. We also want to thank Max Corcoran, Joe Meyer, Liz Halliday, Paul Tapner and the ERA for their years of hard work to make the show into the success it is. We are looking forward to 10 more years of Eventing Radio Show.”

The Jon and Rick Show was a brainstorm idea between Jon Holling, Rick Wallace and Louisa Barton of The Horse Talk Show. The new Eventing talk show began creating a lot of buzz and with the new format launching today, Jon and Rick are excited with the possibilities.

“Rick and Jon are entertaining individually and putting them together on a show is really funny and entertaining,” Joel said. “Basing this show in the Horse Capital of the World only lends to this success it will have on the air. I am proud to be the producer of this show.”

The Jon and Rick Show’s first airing will feature Mia Farley and our second show featuring Alex O’Neal, both listed on one of the USEF training lists. The show will dive into their lives here in Ocala as well as their personal lives as up-and-coming eventing stars.

The first episode airing today, February 13, will debut a new format in digital media streaming show on The Jon and Rick Show Facebook page, and on February 15 on the Horse Radio Networks. It will also have updates from the FEI meeting in Aintree, England where Jon Holling traveled as a part of the USEF Safety Committee participant.

“We are excited for the opportunities in front of us,” Jon said. “Thank you to Matt Taub and Horse Trailer Pros for believing in our vision. Without the support from Horse Trailer Pros the is new voice for Eventing wouldn’t exist. Also thank you to Louisa Barton for jump starting The Jon and Rick Show, we are looking forward to this next step.”

The Jon and Rick Show is pleased to have Horse Trailer Pros onboard as its title sponsor. Horse Trailer Pro’s of Ocala is owned by Matt Taub and located just off US 27 at exit 354 off 75. HTP services all makes and models of horse trailers and specialize in living quarter conversion service and upgrades. “We are very grateful to Matt Taub of Horse Trailer Pros for believing in our show to help promote his awesome horse trailer services. We also send a special thanks to Louisa Barton for giving us a leg up and to HRN’s Glenn Hebert for signing us up as the new voices of the Eventing Radio Show,” said Rick Wallace.

Ready to watch the very first episode? The Jon and Rick Show is hosting a live premiere tonight at 6 pm ET. Update: Here’s a replay!