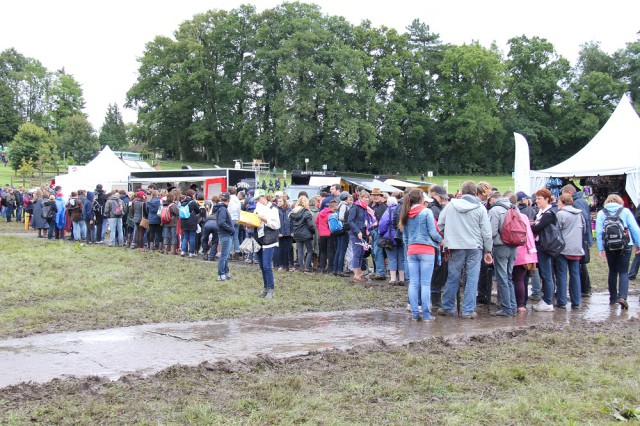 Countless stories continue to emerge out of Normandy, the host site for what is quickly becoming the most disastrous international equestrian sporting event in recent memory. From a total breakdown in traffic, toilets, food, drink, transportation and communication logistics to frightening stories of overzealous security guards manhandling athletes and spectators alike, the number of one-star reviews on the event’s Facebook page paint quite the picture.

So where exactly did things go wrong? Looking at the Organization page on the Normandy 2014 website, it seems like all the pieces were in place — or at least thought about — prior to thousands of people descending upon Normandy. The organizing committee was responsible for the following areas: 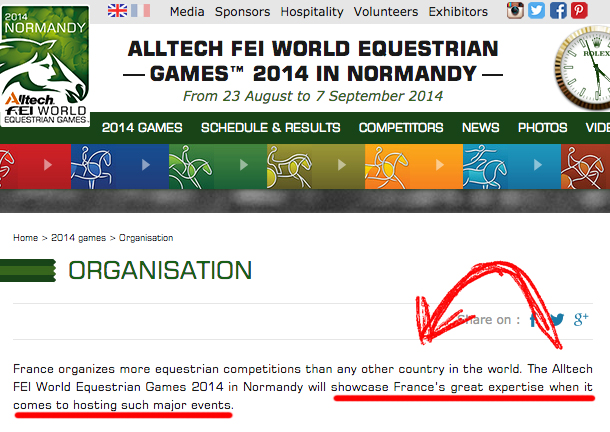 As for who is involved in the organization committee, the website says more than 100 people came together to help organize the Games. Headed by Fabien Grobon, managing director for marketing and licensing for the French Open, the organizing committee also includes the following organizations:

According to the website, this type of GIP (public interest group) structure has been used successfully in the past to host large sporting events in France, like the 2003 World Athletic Championships in Paris and the Rugby World Cup in 2007, as well as the organization of France’s 2002 and 2008 candidacies for the Olympic Games.

So, if this type of organizational structure has worked well in France in the past, what exactly went wrong in Normandy? Looking at the breakdown of responsibilities for the organization committee in the colored chart below, it seems like things went awry on the “Operations” front.

Many comments on social media have suggested that the event logistics snowballed out of control because Fabien Grobon, head of the organizing committee, has no prior experience organizing equestrian events. But the problems that plagued Normandy are not necessarily equestrian-specific.

We’re talking basic things like parking, transportation, sanitation, food, drink — all things that any type of major sporting event would need to provide for spectators, athletes, journalists and volunteers. And to those blaming France in general, that’s not at all fair to beautifully run events in this country, like Pau and Saumur, for starters. 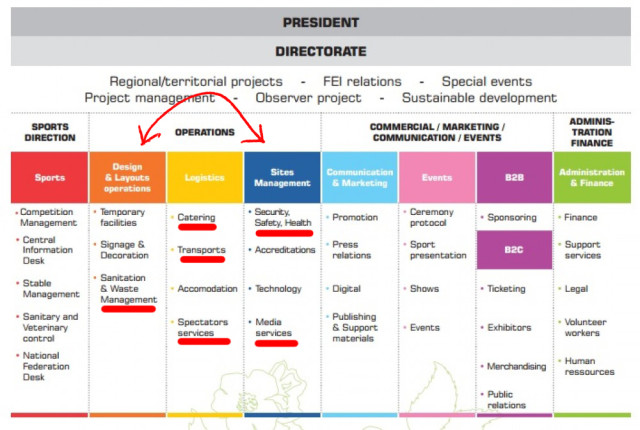 The individual in charge of “Operations” must have an ulcer by now.

Even if enough buses and parking and food and toilets had been provided for spectators, Normandy was doomed to fail from the beginning. Take Haras du Pin, for example. There is one winding village road in and out of the venue — hardly equipped to manage the traffic flow for 50,000 people on cross-country day. And that’s just one example of how this area was ill-equipped to host WEG.

The burden therein lies with the FEI to properly vet venues to ensure that a location is truly suitable to host the Games. But even then, there will always be a certain number of unknowns that can never be fully tested until you drop thousands of people into a new location that has never before experienced such heavy foot traffic. The test events just can’t fully simulate the real deal.

Is this the end of the World Equestrian Games as we know it? Already, there have been numerous calls for the Games to either 1) rotate between established venues like Aachen and Lexington that are equipped to host such a large number of horses and spectators, or 2) split the disciplines into separate championships held at smaller venues, where the large crowds would be easier to handle.

We’re not sure what changes to the current WEG format will ultimately come once the dust has settled in Normandy. But for the sake of the horses, athletes, spectators and the future of international equestrian sport, what happened in France must never happen again.

[Starving to Death in a Mud Pit: WEG 2014 Is the Woodstock of Eventing]