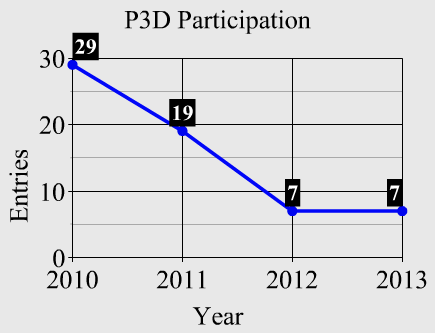 The long format vs. short format discussion wore thin long ago, with most of us having accepted that fact that, like it or not, the short format is here to stay. One of the more interesting and exciting developments that has come out of the change, however, is that the long format hasn’t disappeared but rather adhered itself to a different demographic. T3D as well as fledgling novice and beginner novice three-day events are booming around the country, simultaneously offering lessons in horsemanship and providing championship-type experiences to lower-level competitors.

The P3D, on the other hand, is struggling to stay afloat. Entry numbers continue to shrink each year (see the graph above) with riders opting out in favor of FEI-sanctioned competition. When the USEA Classic Three-day Series launched in 2010, four events offered a P3D division; four years later, only one event is holding strong: the Hagyard Midsouth Three-day Event & Team H.T. And who can blame the other events for withdrawing their support? Consider this year’s sole P3D at Midsouth over the weekend: Only seven competitors started, four of whom finished. From an organizer’s perspective, hosting a three-day is a hassle compared to a horse trial. When only a handful of competitors show up to participate, it can’t seem worth the extra manpower and expense.

Is it time to admit the Classic Series isn’t working at the P3D level? That’s a tough question. On one hand, I think you’d be hard pressed to find an event rider who would argue that the P3D is a bad thing for the sport. Not only do up-and-coming riders have a lot to gain from it educationally–conditioning know-how and the run-and-jump instincts developed by steeplechase, most notably–but our green horses can benefit from it, too. The warmbloods and warmblood crosses that many us are riding now don’t have that fitness base that off-the-track thoroughbreds develop at a young age and return to more naturally throughout their competitive careers. It’s a big jump from the horse trial to the CCI distance, and the long format is a great way to develop the stamina needed for those longer runs.

Here’s the rub: You and I can espouse the virtues of the long-format until we’re blue in the face, but unless we’re putting our money where our mouth is, it’s just whining. I’m as guilty as anyone. Earlier this year I contemplated pointing my horse at the Midsouth P3D knowing it would be a great experience for him, not because he is a traditional long-format type horse but because he isn’t. He’s a Swedish Warmblood who has a tough time getting fit, and a few months of epic trot sets would go a long way toward helping him be successful and stay sound in the long run. But ultimately I decided not to for the usual terrible reasons: time, convenience and ambivalence about competing in a division that got trampled by its CCI one-star counterpart 64 to 7. These days everybody is trying to qualify for something, and participating in an event that requires extra effort without the lure of a qualifying score might seem, for many goal-driven riders, an unnecessary detour.

When the eventing world at large originally decided to scrap the long format, no one protested louder than the United States. At that point, we were victims to a decision that we had no control over. That’s no longer the case. These days, the survival of the P3D is completely within our control. If you want to resuscitate it, circle a three-day on your 2014 calendar and send in your entry. If not, maybe it’s time to finally take the P3D off life support and let it die in peace.