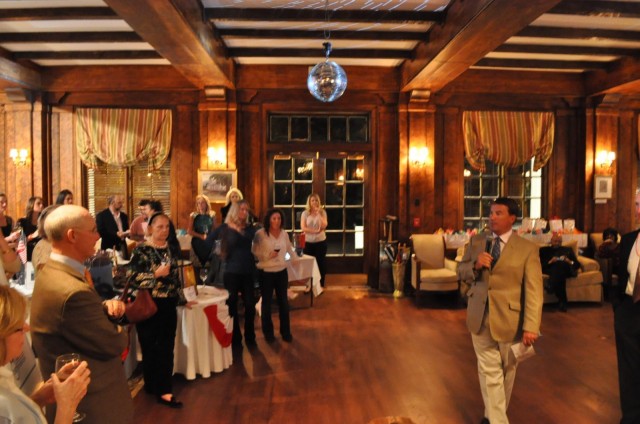 Coach DOC gives a rousing speech underneath a disco ball at The Willcox Hotel in Aiken. Photo by Kate Samuels.

Celebrating the return of power and sunny weather, all the who’s who of Eventing turned up last night at the biennial Olympic Gala at the Willcox Hotel in downtown Aiken, South Carolina. As only the third Olympic Eventing Gala of our times, it is fast becoming a destination for owners, riders and general supporters of our wonderful sport and all those involved.

Aimed to raise money for the USEF High Performance Eventing team, the gala offered a variety of silent auction items, including lessons and coaching from many of the top riders, a day with Phillip Dutton’s head groom Emma Ford, and even twenty x-rays by Kevin Keane, which David pointed out could be “twenty x-rays of literally anything you want!”. There were wonderful paintings, a beautiful bridle, and a great selection of other products available for bidding, and they were approached with great gusto.

While this gala only happens once every two years to raise money for either the Olympics or the World Equestrian Games, this year is particularly exciting. Our new regime under Coach David O’Connor sent nineteen horse and rider combinations overseas in 2013, and part of the mission of the gala was to perpetuate this sort of international travel for many years to come. 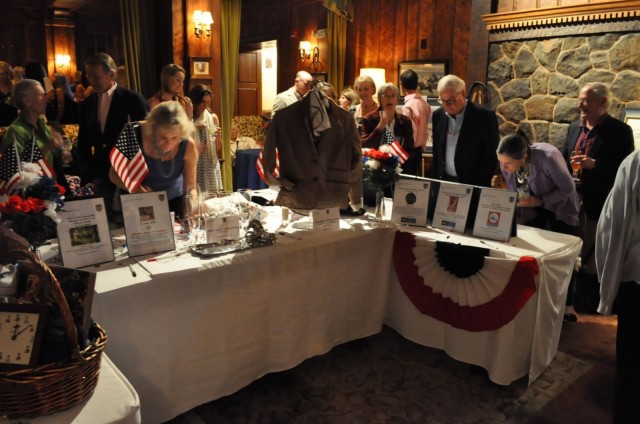 David gave a short speech in the beginning, thanking everybody for coming out and dressing up so nicely. Most of us were sporting fancy farmer’s tan lines, but we had in fact found dresses, heels, suits and ties and were all looking quite snazzy. David spoke to the importance of this year as a World Equestrian Games year, and how he’s hoping for more success there and at the Pan American Games in 2015, and the Olympic Games in 2016.

He stressed that the WEG in Normandy will be “a true Eventing competition, in the sense that it will be the cross country that decides the outcome”. This year we are selecting the team earlier, to avoid the issues we had with horses continually staying fit and primed all spring and summer for the 2012 London Games. We will also be preparing here in the U.S., versus taking all of our horses and riders overseas for weeks prior to the Games. “All of these riders are supported by great teams, and in this sport, it really does take a village,” said David. Without the support of all the owners and patrons, the USEF Eventing Team would be legless, and the gala last night was just one step closer towards achieving the success we perceive to be on the horizon.