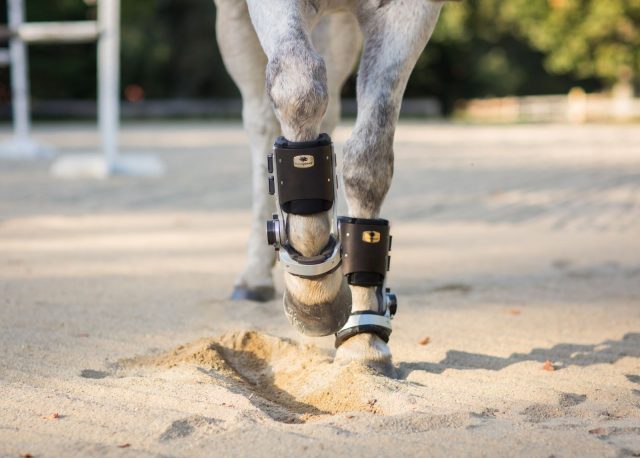 Picture your horse galloping. Specifically, picture their front legs. On the third and forth beats of a stride the front legs straighten as the weight transfers onto each leg in turn, the knee straightens, the fetlock drops, and the soft tissues on the back of the fetlock stretch. We’ve all seen those up-close photos of a horse’s fetlock in a gallop or when they land from a jump — the fetlock is nearly hitting the ground; it’s incredible, isn’t it?

So it shouldn’t come as a surprise that injury to the ligaments and tendons around the fetlock, (known as the flexor apparatus which includes the suspensory ligaments, deep digital flexor tendon, and superficial digital flexor tendon, amongst others) are some of the most common causes of lameness in event horses. And as an event rider you probably know that injury to these delicate structures require months to heal, with some degree of stall rest along with very, very controlled exercise.

Of course, controlling the exercise of a fit event horse can be challenging. While a certain level of exercise is desirable and beneficial during the healing process, one exuberant buck or leap can undo months of progress. It’s a fine line to walk, so to speak.

This is a problem that Wendy Drumm and Dr. Carl Kirker-Head, an orthopedic surgeon and expert in equine sports medicine at the Cummings School of Veterinary Medicine at Tufts University, set out to solve when they founded Horsepower Technologies Inc. in 2010. The creation of the company and the initial investigation into improving equine rehabilitation was sparked by the loss of Wendy’s dream horse, who sadly had to be euthanized after unsuccessful rehabilitation. Wendy was left wondering why there weren’t any better options to help horses pull through orthopedic injuries and if something could be done to improve their outcome.

Horsepower Technologies’ mission to improve soundness though science was born and Wendy and Dr. Kirker-Head began by considering some of these most common soft tissue injuries seen in sport horses and evaluating treatments that human medicine were using for comparable injuries, such as strains and tears to soft tissue in the human knee. Though they are technically different joints and soft tissue (the horse’s fetlock is equivalent to the knuckles in a human hand) there are some functional similarities between them.

The concept that the team kept circling back to was that of the hinged, range of motion knee brace often worn by people recovering from ACL tears. You know the ones — they have the dial on the side that limits how far the knee bend and they stabilize the tendons and ligaments within the joint.

Horsepower Technologies’ first product, the FastTrack™, is like that … but for horses. The FastTrack™ is the world’s first rehabilitative orthotic for equine lameness and it aims to improve the outcome of soft tissue rehabilitation by enabling the horse to exercise again sooner and lowering the risk of re-injury. It’s a game changer as far as equine lameness and recovery goes and frankly begs the question, why didn’t anyone think of this sooner? 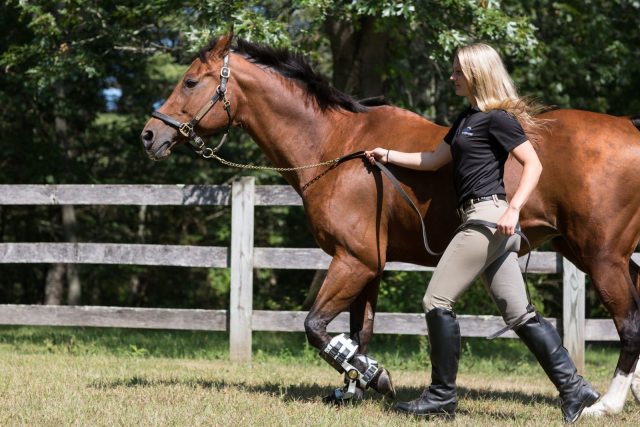 So How Does It Work?

The FastTrack™ has three main components, all of which serve very important functions in helping to reduce the load on the injured tendons and ligaments and keep them from stretching too far while they are healing. All of these elements work harmoniously to create an environment for the horse that makes rehabilitation safe and get the horse moving sooner, therefore ideally shorting the rehabilitation period and improving the outcome.

The SafeStop™ feature is the golden dial on the side of the device that limits the range of motion of the fetlock joint and prevents the tendons and ligaments from extending too far, thereby reducing the risk of re-injury. The dial allows the angle of the SafeStop™ to be adjusted, in ten degree increments from zero to ninety degrees, and restricts the range of motion of the fetlock joint without preventing the horse from normal movement. As the horse steps, the SafeStop catches the fetlock from dropping beyond the angle that the dial is set to.

It is important to note that the FastTrack™ does not limit the horse’s gait; the horse can still canter even when the device is set to 20 degrees, for example.

The silver exoskeleton is made of aircraft-grade aluminum, and if there’s any material out there that can hold up to the wear and tear a horse will put it through, this is it. The exoskeleton comes in two sizes, the difference being the narrowness between the points of the hinge that sit at the fetlock. The narrower size fits many finer-boned breeds, while the wider size is useful for Warmblood types. There are two “cuffs”: one that encircles the cannon bone and one that encircles the pastern.

Both cuffs are padded with thermo-active foam for comfort, fit, and pressure relief. It’s actually the the same material found in the liners of some ski boots. The foam is heated and becomes malleable, then the athlete inserts their foot into the boot liner and as the foam cools it holds its shape for a truly custom fit. Similarly, after the foam liners on the FastTrack™ are heated with a portable heater kit, the device is put on the horse and the foam retains the shape of the horse’s leg once it cools. Additionally, the foam padding on each cuff comes in four different sizes and can be mixed and matched for the best possible fit to the individual horse.

As the amount of movement is increased during the horse’s rehabilitation, particularly during under-saddle use, a pair of liners are available for use under the FastTrack™ in order to reduce the risk of the horse developing boot-rubs. Thankfully, however, due to the custom-fit of the device, the occurrence boot-rubs aren’t cause for concern during much of the rehab process.

The foam is a thick padding, which isn’t very easily depressed by the pressure of a human hand. While it may not seem particularly comfortable at first, being seemingly stiff, the fact that it’s not overly squishy serves a very specific function in supporting the tendons and ligaments by absorbing the force of the horse’s body weight and offloading some of that weight their cannon and pastern bones.

This may seem like a scary concept at first, but it’s actually a very low percentage of the horse’s body weight – only 3 to 4 percent during normal movement – that is offloaded. However, this low percentage is still enough to relieve a significant amount of pressure on the flexor apparatus — enough to make a big difference in the stress that is put on the soft tissue while it heals.

And don’t worry — the effect of this increased weight on the cannon and pastern bones is something that the Horsepower Technologies team investigated during their product testing at Tufts University Cummings School of Veterinary Medicine. The research team used a bone scan throughout horses’ rehabilitation periods in order to make sure that these important bone structures weren’t compromised as a result of the increased pressure. No indication that the integrity of the cannon and pastern bones were compromised in any way was seen.

If you think that wearing these devices would be jarring to the horses, you’d actually be quite surprised. Each device only weighs about three pounds and out of all the horses who have worn the FastTrack™, not a single one reacted adversely — they simply walked off without drama. No panic, and not even any of those exaggerated “shipping boot steps.” 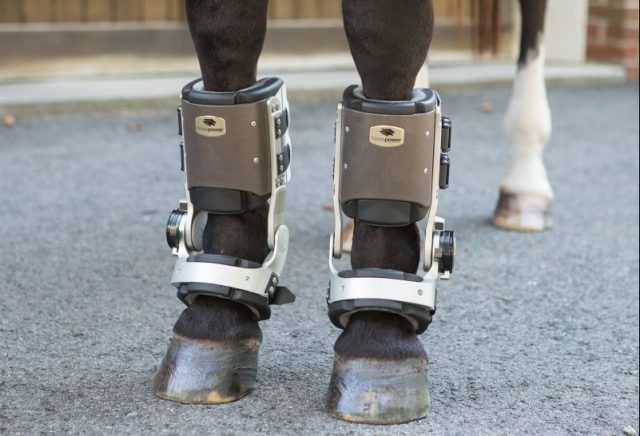 While the company was originally founded in 2010, it look eight years of research and testing to develop a viable product and turn the concept of a human knee brace for horses into what you see today. The company soft-launched the product to early adopters last summer and then officially launched to the public in December at the 2018 AAEP Conference.

There are currently a handful of veterinarians offering the product to their clients (and if you want your local veterinarian to be one of them, let them know!) as well as rehabilitation centers and veterinary schools utilizing them for patients. They’re being used in combination with other therapies as well such as slow-walkers, aqua-treadmills, laser therapy, and stem cell therapy.

U.S. Equestrian Team veterinarian Dr. Tim Ober found the FastTrack™ to be particularly useful for one of his clients, none other than Will Coleman’s four-star mount Boris O’Hara, who sustained a suspensory injury during the cross country at last year’s Jersey Fresh International and was withdrawn from the competition. Boris’ owner, Kathleen McDermott, had hear about the FastTrack™ and suggested using it to Dr. Ober.

Boris wore the FastTrack™ over the spring and summer for hand walking and limited small-pen turnout before progressing to using them for some under-saddle work. Boris has since graduated out of the orthotics over the winter and returned to training, leaving Dr. Ober very pleased with the horse’s progression.

“The FastTrack™ was a helpful tool in Boris’ recovery,” said Dr. Ober. “He wore the boot comfortably without complication and its use contributed to excellent healing and a positive outcome.” 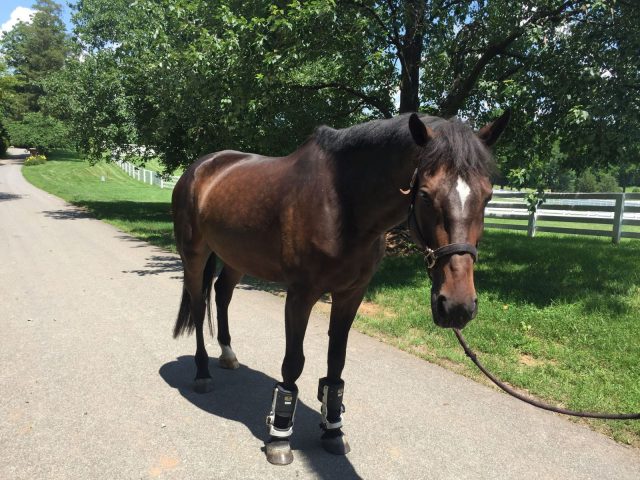 So How Do I Get One and How Do I Use It?

FastTrack™ is always sold or rented through veterinarians – after all, you should consult your horse’s veterinarian to determine the best rehabilitation protocol for you horse. When your veterinarian offers FastTrack, they will take care of measuring your horse and finding the proper fit using the Horsepower Technologies dedicated Sizing Kit and then molding the foam to your horse’s legs with the portable heater kit.

Once your veterinarian has custom fit the FastTrack™ to your horse’s legs, they’ll prescribe you a rehabilitation protocol to follow. This protocol will likely involve periods of stall rest and light hand walking in the early stages, followed by short periods of trotting in hand and under saddle, and later some canter work. Your veterinarian will also tell you what the SafeStop™ dial should be set at for each of these phases.

FastTrack™ should also only be used following the protocol your veterinarian prescribes. This means using the FastTrack™ only during the periods of time that they recommend, not leaving it on 24/7 — after all, you wouldn’t leave any other boot on 24/7, would you?

Keep in mind that FastTrack™ must be used in pairs and there are several reasons for this. Wearing the FastTrack™ on each leg promotes gait symmetry and keeps the horse from compensating on the healthy limb. Speaking of the healthy limb, the nature of the work that event horses do leave them prone to injury in both legs, so there’s a chance that there could be a problem brewing in that leg as well, which wearing the FastTrack™ can protect and help heal from.

With Horsepower Technologies helping to modernize equine rehabilitation and improve the recovery outcome for injured horses, FastTrack™ is an enviable tool.

“I truly wish that the FastTrack™ existed when I was competing professionally,” says Olympic gold medalist David O’Connor, current Chair of the FEI Eventing Committee. “I know several Olympic horses that would have benefited from Horsepower’s customized orthotic technology. The next generation of equine athletes will have a powerful new tool to help them return to competition after a sporting injury — it’s a game changer!”