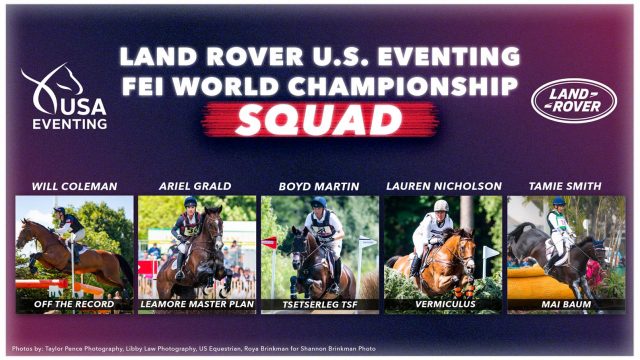 Like kids on Christmas, we’re eagerly tearing the wrapping off press release after press release today, and the latest to land in our inboxes is the hottest ticket of them all: Team USA has been announced for next month’s FEI World Championships for Eventing at Pratoni del Vivaro in Rocca di Papa, Italy.

The traveling team to Pratoni for the U.S. will include:

The following combinations have been named as alternates, and are listed in alphabetical order:

The competition format for Worlds will consist of four (some teams may have three members) team members with one dropped score and one individual combination. These designations will be determined and announced later on. Team USA will converge on MARS Great Meadow International August 24-28 in The Plains, VA for a final Mandatory Outing before shipping out from USET Headquarters in Gladstone.

If you’re looking for all the latest information on Pratoni, be sure to check out our Ultimate Guide that’s chock full of the latest coverage, team announcements, and much more.