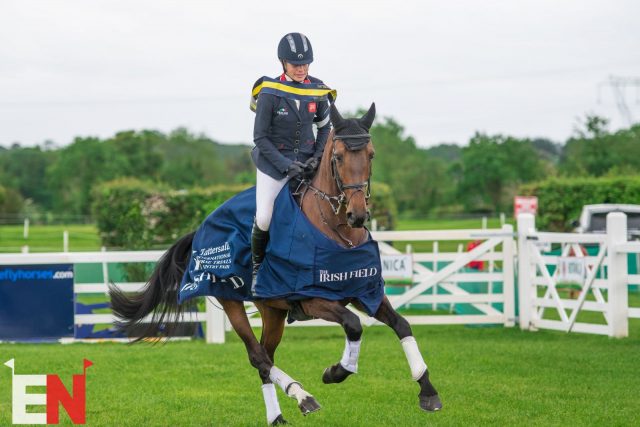 Rewind twelve months: it was the first half of 2018, and the world was a purer place, full of unspent hopes and dreams, and totally devoid of the finale of Game of Thrones and the FEI’s revised flag rules. What a time to be alive, eh?

It could have been 2018 all over again as the showjumping finale of the Irish Field CCI4*-L at Tattersalls came to its conclusion yesterday. Just as he had been a year ago, Will Coleman held the overnight lead, though rather than his stalwart campaigner OBOS O’Reilly, this time he rode level debutante Off The Record. And, heartbreakingly, all it took was a whisper on a rail, once again, to end the dream. Once again, he had to pass the top honours to Izzy Taylor, who also rode a debutante in PSH Gazelle. 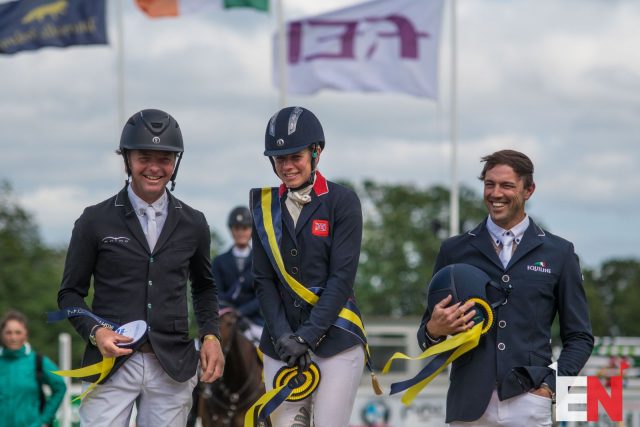 A chilly Izzy Taylor tops the podium in the CCI4*-L, making her the only rider to take this class on three occasions. Photo by Tilly Berendt.

In winning the CCI4*-L, Izzy writes her name in Tattersalls’ history books: she’s now the first person to ever win this class three times. Her first win came in 2014 aboard Allercombe Ellie, and her second, of course, was last year with Call Me Maggie May. This week, she takes top honours aboard Gary Power’s eleven-year-old mare (Flipper d’Elle x Miss Roxcento), climbing from eleventh after dressage to win, finishing on her first-phase score of 32.4. 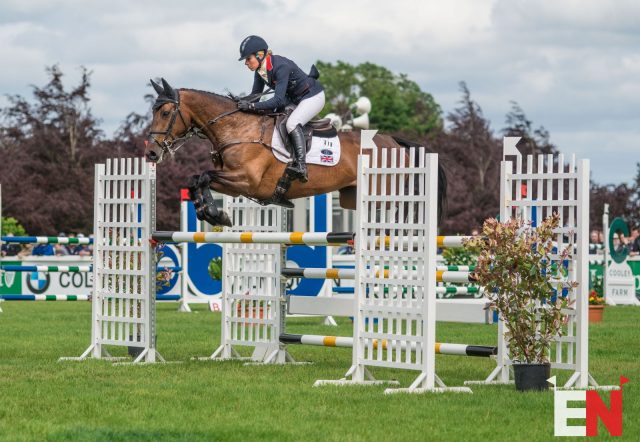 PSH Gazelle shows her potential with a classy victory for Izzy Taylor. Photo by Tilly Berendt.

“I’m very pleased; she delivered a fantastic clear round, and she couldn’t have gone any better,” beamed Izzy, who also took top spot in the Cooley Farms-sponsored two-star and two top-ten finishes in the three-star. “Unfortunately – or fortunately! – Mike [Owen] and Will [Coleman] both had a fence down, so she could win.”

Izzy, who is a regular visitor to Tattersalls with a lorryload of horses, praised the competition for embracing the core values of the sport: “All three phases have been very influential, and that’s how it should be – it’s a three-phase sport,” she says. 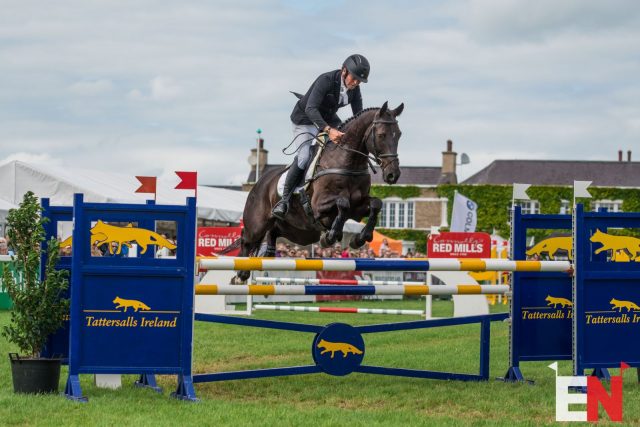 “The dream is that he’s my Tokyo horse – that’s what every step of his production has been geared towards. Whatever falls in our way in that path is what we’ll take,” said New Zealand’s Dan Jocelyn after finishing second aboard the ten-year-old Blackthorn Cruise. A great round aboard one of his three-star rides had filled the experienced rider with confidence, and he came forward prepared to pull out all the stops.

Despite his young age, Blackthorn Cruise has now lodged four starts at this level, though this is his best result so far. “He got to the top quite quickly, which was a little bit of a detriment to him, actually – he needed to feel comfortable, and now he does, which has shown through in all three phases,” explains Dan.

Blackthorn Cruise will likely head to Aachen next, giving him the chance to experience a championship atmosphere as Dan continues on the Tokyo trail. 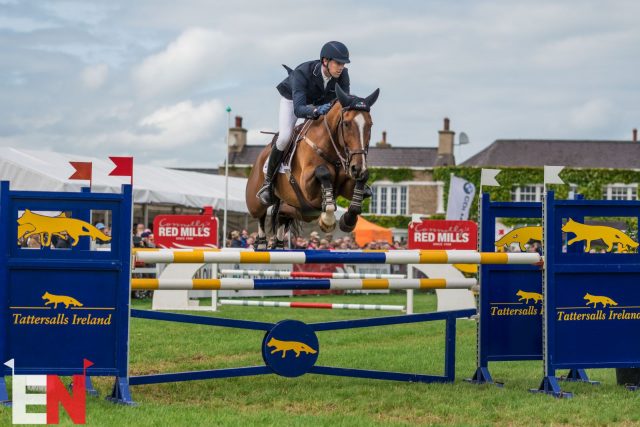 Will Coleman misses out on the win, but discovers an inexorable talent in his Off The Record, finishing third after an unlucky rail. Photo by Tilly Berendt.

Once Will Coleman gets past the initial disappointment of missing out on the win – just barely – he’ll surely be comforted by the fact that his ‘quiet confidence’ in Off The Record has proven well-founded. In the ten-year-old’s first CCI4*-L – and first trip abroad – he’s stepped up to the plate in every way, posting a competitive first-phase mark of 31.5 to sit in equal sixth, and catapulting into the lead after a foot-perfect cross-country round that saw the pair finish on the optimum time of 10:18. Despite that rail, which came late on course at the triple bar heading into the final related distance, his showjumping, too, was excellent, and throughout the week he’s shown an enviable aptitude for atmosphere and pressure.

“I can’t complain at all, really,” he says. “The horse tried really hard; he was a little nervous in there, and it was just hard to get into a good rhythm where he felt a little distracted. He’s normally a good jumper, but I couldn’t quite settle him enough. I was a bit off that triple bar and he tried, but he couldn’t quite make it. It’s a good atmosphere and a windy day, and he’s still pretty young, so I’m not going to be upset about it. We’d love to win, but hopefully there will be other chances.” 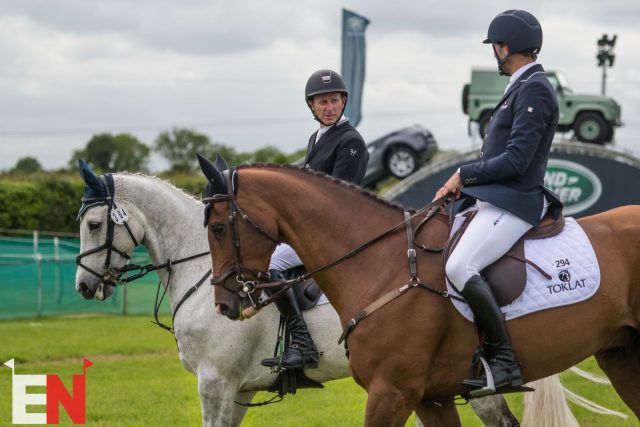 Little and large: Will Coleman’s Off The Record boasts an impeccable Irish heritage, while 15.1hh Jims Pal brings to the table a bit of rough – “he could have been stolen from someone’s field as a foal, for all anyone knows about him,” says Michael Owen. Photo by Tilly Berendt.

Off the Record was sourced through Richard Sheane’s Cooley Farm, and Will and his family enjoyed the Sheanes’ proper Irish hospitality through the week.

“It was nice to come back to where we got him and try to put in a good performance, and he did do that – I don’t think I can be at all upset,” says Will. “He’s got a ways to go [before he’s a championship mount], but I think a lot of the horse; he really, really wants to be good, and it’s my job to help him figure out how to do that. That’s how I’m looking at it – you’ve got to try to get a little bit better each time. This week’s been great for him. He’s going to come away more mature and ready for this type of competition the next time.” 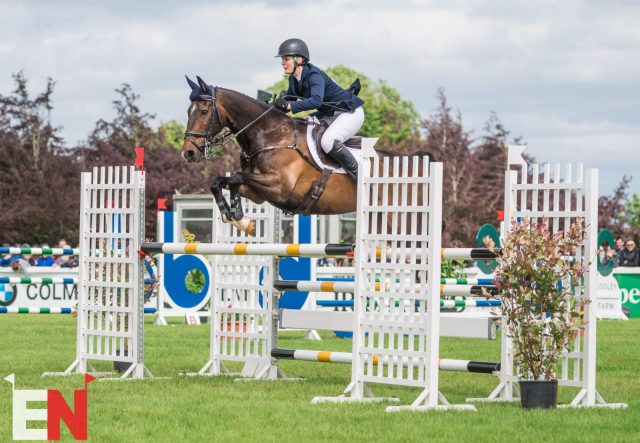 Esib Power is best of the Irish, finishing fourth aboard the experienced Samuel Thomas II. Photo by Tilly Berendt.

She’s arguably one of Ireland’s most accomplished riders, but Elizabeth Power – known to her nearest and dearest as Esib, the daughter of former showjumping legend Captain Con Power and sister of champion National Hunt jockey Robbie Power – has been dogged by an all-too-common problem. Despite pairing a successful five-star eventing career with a sideline in showjumping that has seen her finish in the top twelve in the Hickstead Derby on two occasions, her continued quest for world domination has been somewhat stymied by a lack of top-flight horses.

That’s why it’s such a thrill to see the rider partnered up with Samuel Thomas II, the fifteen-year-old Irish Sport Horse (El Rio x Banard Que) with whom Oliver Townend enjoyed a top-ten Burghley result in 2016. But for all that, he’s not necessarily the most straightforward of horses, and when Esib took the reins from her then-boyfriend midway through the 2018 season, she took over the gelding’s baggage, too, which showed in their early international efforts together. In this, their fourth international together, it all finally came together, and Esib’s ability to impart her own fighting spirit unto her horses won the day. The pair climbed from 21st place after dressage, in which they scored a 36.5, to eventual fourth after clear rounds inside the time in both jumping phases. This was enough to earn Esib the prize for being the best Irish rider in the class – though, in fact, the prize was always to be hers, as none of the other contenders completed the week’s competition. 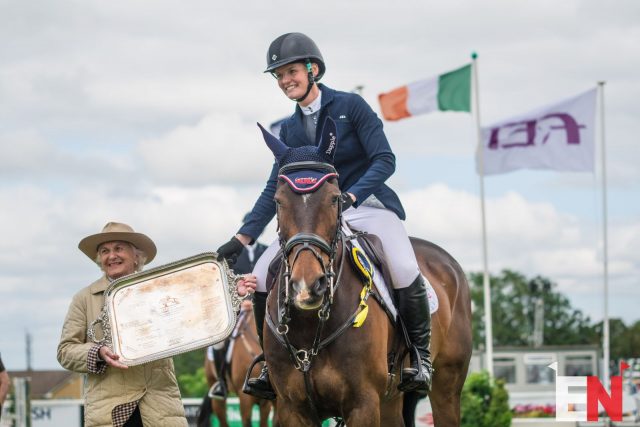 Esib Power and Samuel Thomas fly the flag for the home nation. Photo by Tilly Berendt.

For Esib, who finished seventh at Burghley last year after producing a masterclass in cross-country riding aboard Soladoun, fourth place at Tattersalls certainly isn’t the upper limit of her scope – but now, perhaps, with Samuel Thomas proving himself a worthy second string, she’ll be better equipped to step into the spotlight and earn the accolades she deserves for her fierce, determined riding. 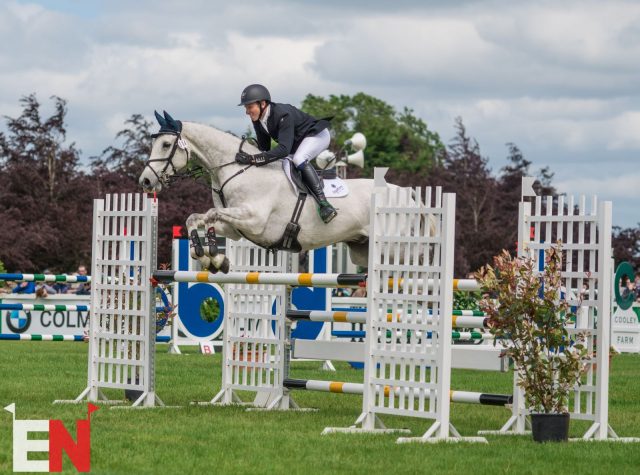 It was to be a battle of mind over matter for Britain’s Michael Owen, who nevertheless produced a 4.4 fault round aboard the thirteen-year-old Jims Pal. They finished in fifth place, dropping from overnight second, but completing a week-long trajectory that saw them climb from initial eighth after producing one of just four clear rounds inside the time on Saturday.

“To be honest, I wasn’t even sure if I was going to be able to ride today – I’m in so much pain,” said  a grimacing Michael, who dislocated his shoulder at the end of the cross-country horse when the gelding hit the penultimate fence. A Herculean effort from both horse and rider kept the pair upright, but Michael took the full force of the impact.

“He hit it very, very hard. It’s a miracle that I actually got to jump today – I actually jumped another one this morning, too, and it went clear. I’m in agony!”

Despite measuring in at just 15.1hh, Jims Pal easily made up the forward-set strides on Ian Stark’s cross-country track. This, Michael says, comes down to his can-do attitude – a trait that may have been passed down from some suspected pony lineage.

“He’s Irish-bred, but we don’t know his full breeding – we think he probably has a lot of Connemara in there, though,” he explains of the horse who came from a dealer as a ‘naughty’ four-year old with an untraceable history. Bought for a pittance, the youngster then went hunting with Michael’s girlfriend, who produced him to Novice. “I took over the ride when we realised he had a bit more potential, and the rest is history. He just ate that cross-country up so well yesterday – he’s a little star, such a pocket rocket.” 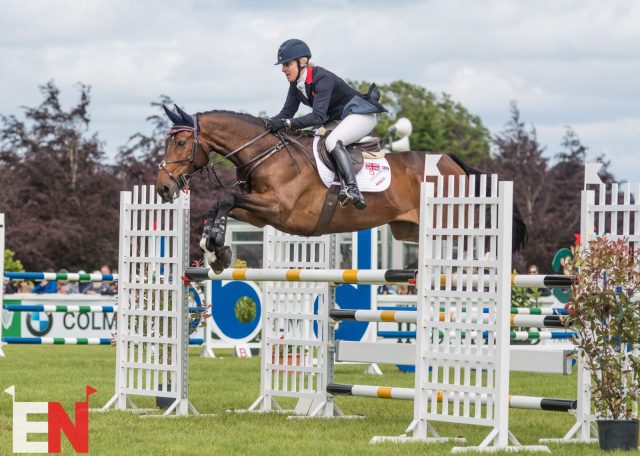 Beyond the big win, the fifth through tenth places on the leaderboard were taken by British riders, too. Sixth place went to Tina Cook and Killadeas, who added a smattering of time penalties on Saturday, but produced one of Sunday’s five double-clears to step up from seventh. Killadeas has, thus far, been one of the under-the-radar denizens of Tina’s string, but a glance across the collecting ring proved that he’s obviously one of the most popular. Tina’s children, Izzy and Harry, made sure the talented nine-year-old knew just how well he’d done throughout the week – good incentive, one would hope, for a continued surge in performance. 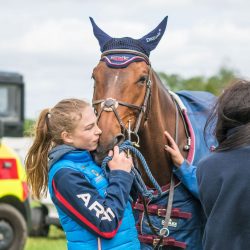 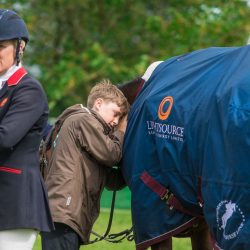 That’s all for us from a blustery, beautiful Tattersalls. Next, Chinch will be working off the Guinness over the formidable hills of Yorkshire’s Bramham International Horse Trials, where we’ll be reporting on a jam-packed CCI4*-L and CCI4*-S, as well as the much-coveted CCI4*-L for under-25s. Sláinte!

The top ten at the conclusion of the exciting Irish Field CCI4*-L at Tattersalls.