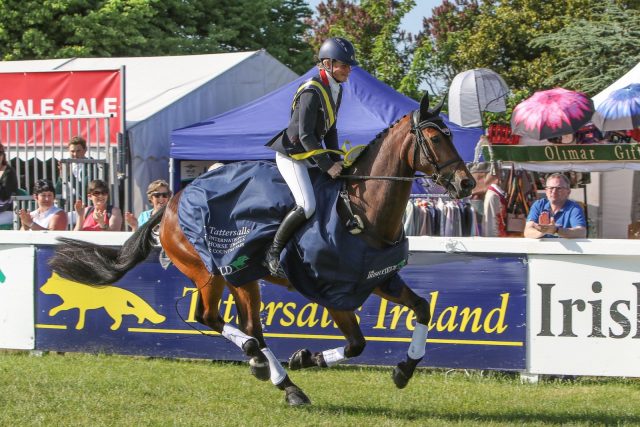 Izzy Taylor and Call My Maggie May. Photo by Radka Preislerova/Tattersalls.

The top of the leaderboard was all tied up after British riders Izzy Taylor and William Fox-Pitt both show jumped cleanly at Tattersalls International Horse Trials & Country Fair in Co Meath, Ireland this afternoon. That left it up to cross country time penalties to name Izzy Taylor and Call Me Maggie May as the winners of The Irish Field CCI3*.

Izzy and Tom Strong’s 11-year-old Dutch Warmblood (Hamar X Marijke, by Hemmingway) finished on their dressage score of 28.5. This is Izzy’s second CCI3* victory here — she also won in 2014 with Allercombe Ellie.

William Fox-Pitt moved into second on the shared score of 28.5 with Jennifer Dowling’s Little Fire. Their only fault through the weekend were .8 time penalties on cross country.

Overnight leaders Ludwig Svennerstål and El Kazir SP, a 14-year-old Belgian Warmblood (Capriano X Katella, by Blanc Rivage xx) owned by Jonathan and Jane Clarke, had one rail down for a third place result on a 29.5.

Andrew Hoy jumped from 7th to 4th after a clear round with Vassily de Lassos, a 9-year-old Anglo-Arabian owned by Paula and David Evans and Andrew. Their final score is 31.1. 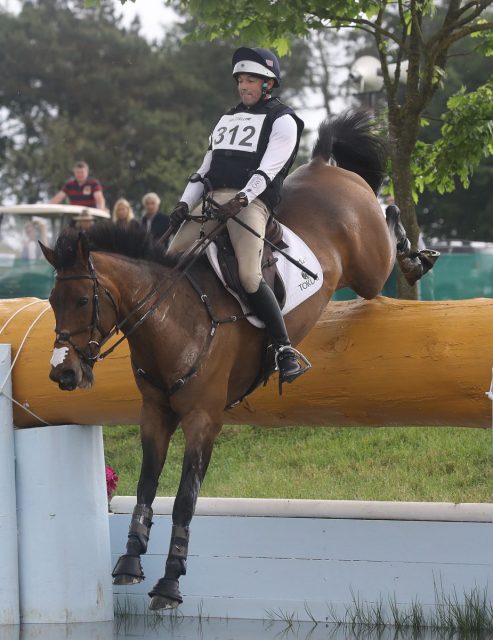 Will Coleman and OBOS O’Reilly. Photo by Lorraine O’Sullivan/Tattersalls.

Will Coleman also earned a top five finish riding OBOS O’Reilly for the United States. Will and “Oboe,” 15-year-old Irish Sport Horse (OBOS Quality X Omard Clover Queen, by Clover Hill) owned by the Four Star Eventing Group, had a very unlucky rail midway through the course to add four penalties. They finish on score of 32.4 in their Tattersalls debut.

Honorary American Ryan Wood made his first competitive trip across the Atlantic this weekend with his own and Curran Simpson’s Woodstock Bennett. The 11-year-old Irish Sport Horse (Shannondale Sarco X Ponail Belle, by Beau Royale) had two poles down to finish on 45 penalties.

“Bennett tried his best!” Ryan said. “It was a very technical track. I’m very pleased with him all week, and excited to have our first European event under our belt.” 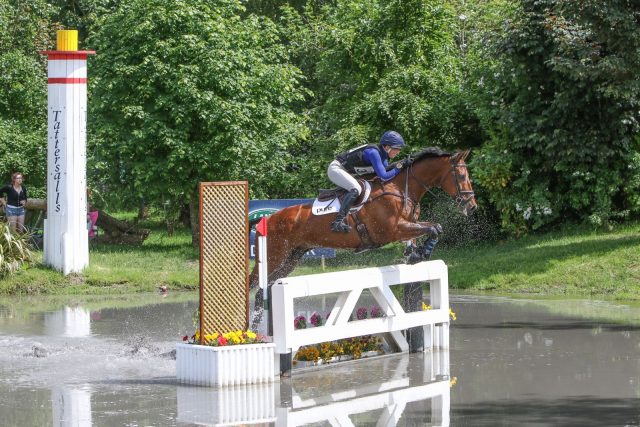 The George Mernagh Memorial CIC3* saw a dramatic cross country phase with much of the leaderboard shifting, but overnight leader Emma McNab held firm to take home the win with Fernhill Tabasco.

Two heavy hitters, fifth-placed William Fox-Pitt with Bay My Hero and third-placed Jonty Evans with Cooley Rorkes Drift, came to grief at the water complex at 19b, an angled brush. William and Bay My Hero were up quickly and were without injury. Jonty was attended by medics before being transported to Connolly Hospital, Blanchardstown. The event confirmed that he is in stable condition, and had since been transported to Beaumont Hospital for further treatment. Cooley Rorkes Drift was uninjured in the fall.

After Jonty’s fall, Emma had quite a bit of time on her hands as they held the course, but she and “Toby,” a 10-year-old Irish Sport Horse (Tabasco Van Erpekom X Dinan Rhoda, by Porter Rhodes xx), owned by Kevin McNab, Dom and Poppy Worcester, Julia and Jamie Dougall, looked unbothered after resuming, adding 5.2 time penalties for a final score of 27.1. 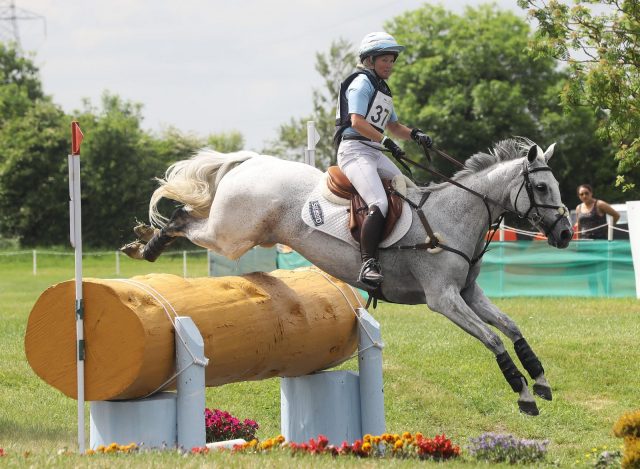 Speed queen Jonelle Price took up second place with Faerie Dianimo, a 13-year-old British Sport Horse owned by Jonelle,  Trisha Rickards and Jacky Green. This pair added nothing across country for a three-phase score of 28.3.

Two other pairs managed the time in addition to Jonelle: Izzy Taylor with Director General and Tiana Coudray with Under the Clocks. Tiana and “Ninja,” a 16-year-old Thoroughbred’s (Woodborough X Regal Kate) owned by Jatial Ltd., finished 12th on 44.7 points.

“He was very excited to be back at it again! He hasn’t done anything since Blenheim last year, but he just knows his job so well that you don’t need much preparation. He is such an amazing cross country horse that you mostly just have to point and hang on tight,” she said.

Tiana wasn’t necessarily gunning for the time, but when she heard no one had managed it yet, she let Ninja go for it. “I was just planning to give him a nice jump around, but as I headed to the start box I did hear that no one had made the time yet, so I thought if he’s feeling good I will let him run a bit more. He was on all the minutes quite easily. Given the chance he would like to go a lot faster,” she said. 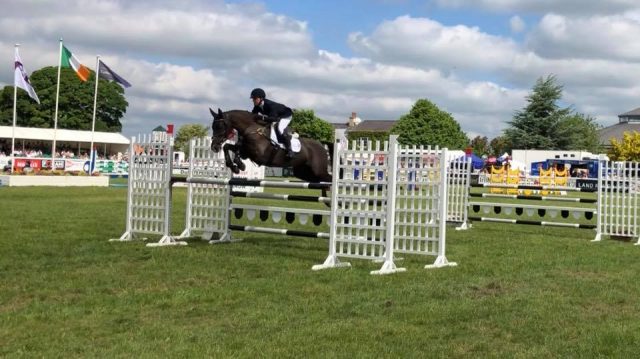 In the CCI2*, only two rails marred the final result of 42 for Tiana and her other ride, Cancaras Girl. Of the 48 starters, the 8-year-old Holsteiner (Cancara X Rubina VI, by Narew) finished 24th – a feat Tiana is pleased with as this is the mare’s first two-star.

“She jumped a really lovely round, but just breathed on two parts of treble combination. It must have been the lightest of rubs because I brought the photos and it looks amazing. The rail must have fallen after,” she said. “At any rate we are very pleased with her performance all weekend and think she is one with an exciting future.”

Click here for the final scores from all divisions, and click here to catch up on all the EN coverage of Tattersalls. Go Eventing.