Maizey Manor's Jacky Green is back with another hilarious adventure experienced by the riders overseas. This time around, David O'Connor finds himself in a new position: mechanic. Did he make it to the golf course that day? Read on to find out! 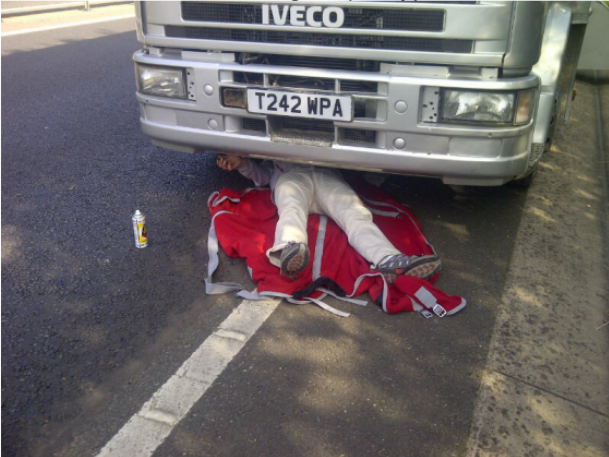 The glamorous life of travelling the world with the USEF reached new heights this week for David O’Connor when he found himself underneath a broken down horsebox on the A419 near Cirencester in the UK. Luckily for him, he was not alone in this adventure, as by a quirk of fate he had been re-united with his old travelling buddy, Graeme Thom who found himself in a similar position.

The more observant of you will note that Graeme Thom took the trouble to put a horse rug down on the floor to protect his clothes, but since he didn’t push it far enough under the truck he still got his pale grey jacket pretty filthy.

But to recap: Having survived the notoriously badly organized WEG and come through Burghley with barely a scratch (apart from loading the trunks for the trip to Burghley when he nearly lost his foot, that is), David was looking forward to 24 hours off in the UK and the strong possibility that he would be able to fit in a round of golf.

Having spent the previous evening in the laundromat with a book and a dodgy pizza, his first error of judgment came when he arranged to meet up with Graeme Thom at Maizey Manor Farm. We persuaded him that it would be a nice thing to do to run up to Rectory Farm where Rebecca Howard and Jonelle Price were going to showjump their Blenheim horses before the promised game of golf in the afternoon.

His next error came when he decided we could all go in Graeme’s car, and we left with plenty of time to pop up the road for a 30 minute journey. 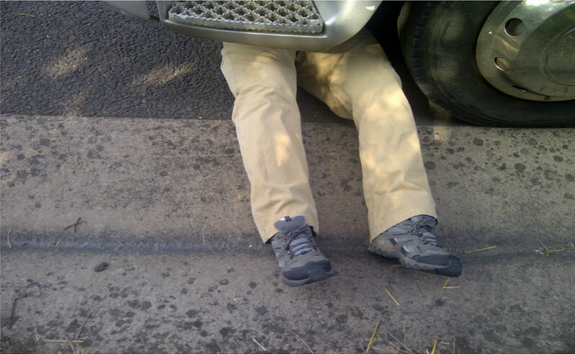 David O’Connor takes a shot at the stricken lorry. Photo from Jacky Green.

Firstly, a text and then the sight of the horsebox that had been borrowed for the trip parked up on the busy dual carriageway was a sure sign that the golf might be delayed. The helpful policeman that had arrived had coned off a lane. Since neither Jonelle nor Rebecca were deemed fit as mechanics, David dutifully got underneath the truck and quickly pronounced that it was in fact out of fuel.

This was strenuously denied by Jonelle (the driver) as the gauge clearly read a quarter. As David was pretty sure he was right, the bet was undertaken that a bottle of champagne would be provided if he was proved to be right. David and Graeme then headed off to the garage to buy some fuel while we entertained ourselves by having the police close the whole carriageway so we could off load the horses onto another truck which had been summoned to the scene.

Horses and riders then went onto the showjumping whilst we remained with the stricken truck. Deb Furness and I amused ourselves by pointing out to the boys that they were not only ruining their clothing but they were also not having much luck in bleeding the diesel through as the truck still would not start.

The boys then amused themselves by heading off to the showjumping and leaving Deb and I in charge of the truck and the increasingly agitated policeman, who began mentioning the fact that if David was right then we would incur a £100 fine for being dumb enough to run out of fuel.

Having finally parted with an exorbitant amount of cash for more fuel and a very annoying mechanic who eventually showed up three hours after he had been called out, Deb and I drove the truck to the venue where we discovered everyone had departed. With perfect timing, my phone battery died and we then played a game of cat and mouse with David and Graeme as we entered the final part of the saga where we were hunting a silver 4WD and they were hunting a large blue lorry that had seemingly vanished off the face of the earth.

As we eventually drove home, tired, hungry and in need of some alcoholic refreshment, David could be heard emitting a strange noise from the front seat of the car. I wondered whether it was one of those pre-heart attack signs that you are supposed to know about but it turned out he was just whimpering in distress as we passed the golf club which he had so longed to play at. Apparently he and Graeme had whacked a few balls at the showjumping venue, but then Rebecca Howard spoilt the fun by wanting to actually jump the course as a whole which in hindsight seems pretty selfish!

David got his champagne at a fabulous supper and Jonelle brought him a present to remind him never to stop and help a stricken truck on the side of the carriageway!