Jacky Green works for her own Jacky Green Equestrian Media company and operates out of Maizey Manor Farm in the UK, and she is a regular Eventing Nation contributor. Today Jacky has kindly sent us a report about Canada’s Rebecca Howard and Riddle Master arriving at Badminton.
—- 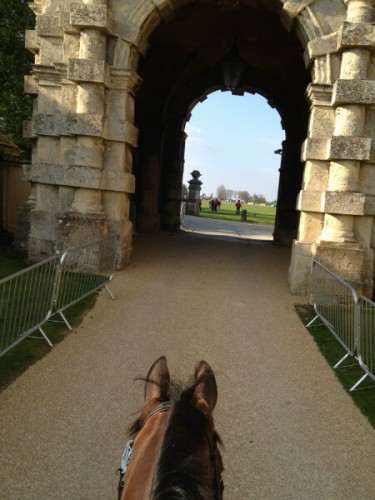 It was always the plan after London 2012 that Rebecca and Riddle Master (Rupert) were going to stay in the UK for a couple of years. It was a “right place, right time” situation that there was a riding job that came up as second jockey to New Zealand team riders Tim Price and Jonelle Richard’s Mere Farm set up just on the outskirts of Marlborough and that has turned out as a very happy alliance! Rebecca gets to ride 10 or 12 horses a day, picks up a few competition rides and generally works her butt off doing what she loves best, riding event horses.

After finishing in the top 12 at Blenheim CCI *** in 2012 Badminton was the aim. A few weeks holiday out in the paddock at Catherine Burrell’s Maizey Manor Farm base and then Rupert moved to Mere Farm and spent the long, cold winter trying to grow as much coat as possible and learning not to be so spooky in case he fell over on the ice! Despite the Spring cancellations pretty much everything has gone to plan….the early OI start at Iselham proved to be a massive bonus as then there was no where to run again before Fontainbleu CIC***. Rupert stepped up to the challenge with a fabulous display of dressage and jumping and a top 6th spot amidst the cream of Europe.

Then followed a 6th place at Weston Park Advanced and Belton Advanced was used as a combined training as a final prep. Isobel Wessels has helped to fine tune the dressage and a final cross country school at Russ Hardy’s Boomerang base this weekend means that both Rupert and Rebecca are ready and waiting to start with the jog on Thursday. They are there, parked and ready to rock! To underestimate this combination would be a mistake, they have a great partnership and if luck is on their side a top 10 finish is by no means just a dream.