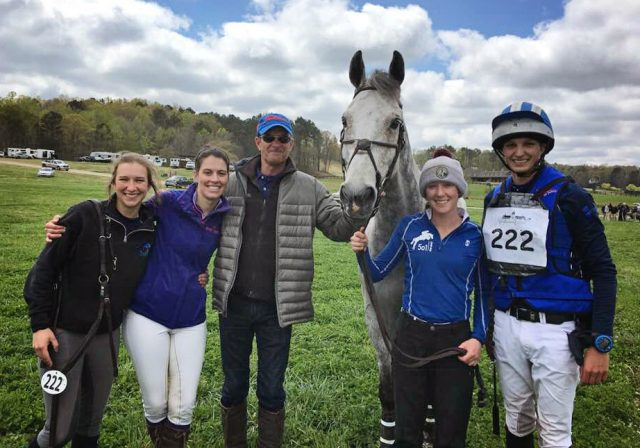 Jacob Fletcher clinched the first CIC3* win of his career at Chattahoochee Hills Horse Trials in Fairburn, Georgia, dominating across both days of competition with Atlantic Domino to top the leaderboard on a final score of 30.0.

Jacob and “Domino,” a 13-year-old Irish Sport Horse (Dunlough Striker X Atlantic Amanda, by Glidawn Diamond) owned by Frank Fletcher and Fletcher Farms, were the only pair in the CIC3* to finish on their dressage score.

Jacob, who is based outside Little Rock, Arkansas, trains with Mike Huber and also worked diligently on his dressage with USEF Developing Coach Leslie Law and James Burtwell over the winter season.

“He was definitely sharp and fresh for dressage. Normally he’s a horse that I don’t give the judges a reason to give me less than a 7, and I try to see if I can sneak in a 7.5. I’ve been working on trying to sneak in some bigger marks, so I went for it a bit more this time,” Jacob said.

“The trot work was really good and flashier than usual, so he got some higher marks there. Then the ‘go for it’ strategy came out in the canter. I had two bobbles — he spooked at some of the decorations by the arena when I was doing the extended canter half-circles.”

Domino sat fourth after dressage and was also a bit sharp for show jumping later in the afternoon, but with the time riding right on Marc Donovan’s course, Jacob used it to his advantage.

“I tend to have 2 to 4 time penalties when I show jump him. We were all really tight on the leaderboard going in, so I wanted to make sure I was quick enough, and I probably took it a bit to the extreme worrying about the time,” Jacob said.

“I did go a little fast. It was probably more like a jump-off, but we made the time, so that was exciting. I’ve got to work on a happy medium with the speed. Coming out of the ring, Mike said, ‘You made it up in the turns — you didn’t have to go quite that fast!'”

Jacob and Domino’s fast and clear show jumping round boosted them up to lead after the first day of competition. Only five of the 22 pairs (23% of the CIC3* field) jumped clear and inside the time in show jumping.

Speed ultimately proved to be the deciding factor for the weekend, as Jacob and Domino were the only pair to catch the optimum time of 6 minutes, 6 seconds on Hugh Lochore’s CIC3* cross country course the next day to secure the win.

“To make time at any CIC3* you have to be riding on the edge, and I definitely do on Domino since he doesn’t have the highest gear. I don’t have to check him before any jumps, so the fact that he is really rideable helped us save time.”

Following the win at Chattahoochee Hills, Jacob and Domino will next go to Jersey Fresh International in Allentown, New Jersey to run the CCI3*. They last competed in a CCI3* at Galway Downs in 2015, though not because the horse was sidelined by an injury. Instead, Jacob had a lighter competition schedule while finishing his degree in entrepreneurship at the University of Arkansas.

Now that he has graduated, Jacob is working part-time selling insurance through his family’s business, Fletcher Insurance Group, while also running a training and sales business through 5o1 Sport Horses at his family’s Fletcher Farms.

Jacob’s return to a busier competition schedule has been very successful thus far. In addition to winning his first CIC3* at Chattahoochee Hills, he and Domino also finished second in the Red Hills CIC3* last month.

“It’s exciting that even though it feels like chaos with how busy I am, we’re still heading in the right direction,” Jacob said. “I’m hoping we have hit a place where we can be consistent now.”

Jacob hasn’t yet solidified his competition plan for the rest of the 2018 season beyond Jersey Fresh, but he said he is hoping to work towards competing in his first CCI4*.

Looking to the rest of the CIC3* leaderboard, Buck Davidson and Carlevo, an 11-year-old Holsteiner (Caresino X Ramatuelle, by Levernois) owned by Carlevo LLC, finished second on 39.5 in the horse’s final prep run before the Land Rover Kentucky Three-Day Event.

Sydney Conley Elliott and Cisko A, a 12-year-old Westphalian (Cayetano L X Rhiannon M, by Ribot) owned by Carol Stephens, finished third on 39.7 in the horse’s first run back at the level since the 2016 American Eventing Championships.

Click here to view final scores from Chattahoochee Hills. Our friends at the USEA provided excellent coverage of the CIC3* and Advanced, so click here and here to read more from #ChattHills. Go Eventing.