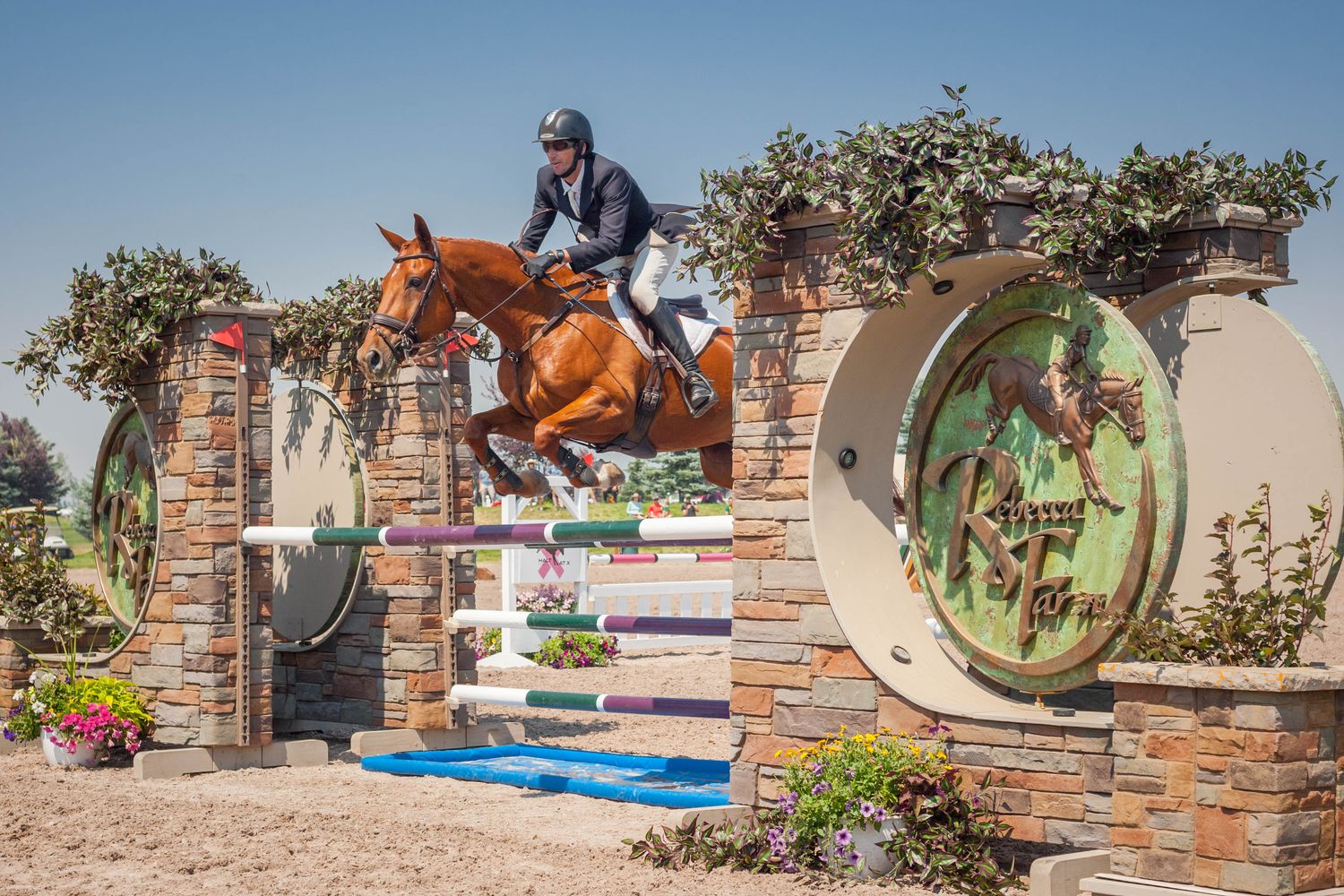 James Alliston was the big winner of the weekend at The Event at Rebecca Farm, with 3 top 2 finishes in the FEI divisions. James won first and second in the CCI4*-Short, as well as first place in the CCI4*-Long.

James Alliston and Paper Jam jumped a double-clear in showjumping to win the CCI4*-Long on Sunday with a final score of 38.8. James said the 12-year-old Hanoverian “was really awesome – honestly I wasn’t expecting to win because I had some time penalties yesterday. But he’s a really sweet horse and a real tryer, and I am excited for him going forward.” James will run Galway with “Jammers” at the end of the year. He also said, “He’s a fast horse, he doesn’t get tired. I’m hoping he can go 5*. He’s got all the pieces.”

James, who is based in California, loves coming to Rebecca Farm and says that “riding is one of those sports that’s all about experience.” Coming to The Event is quite eye opening because of the natural terrain, as well as the atmosphere. It prepares horses and riders for other big venues away from home. 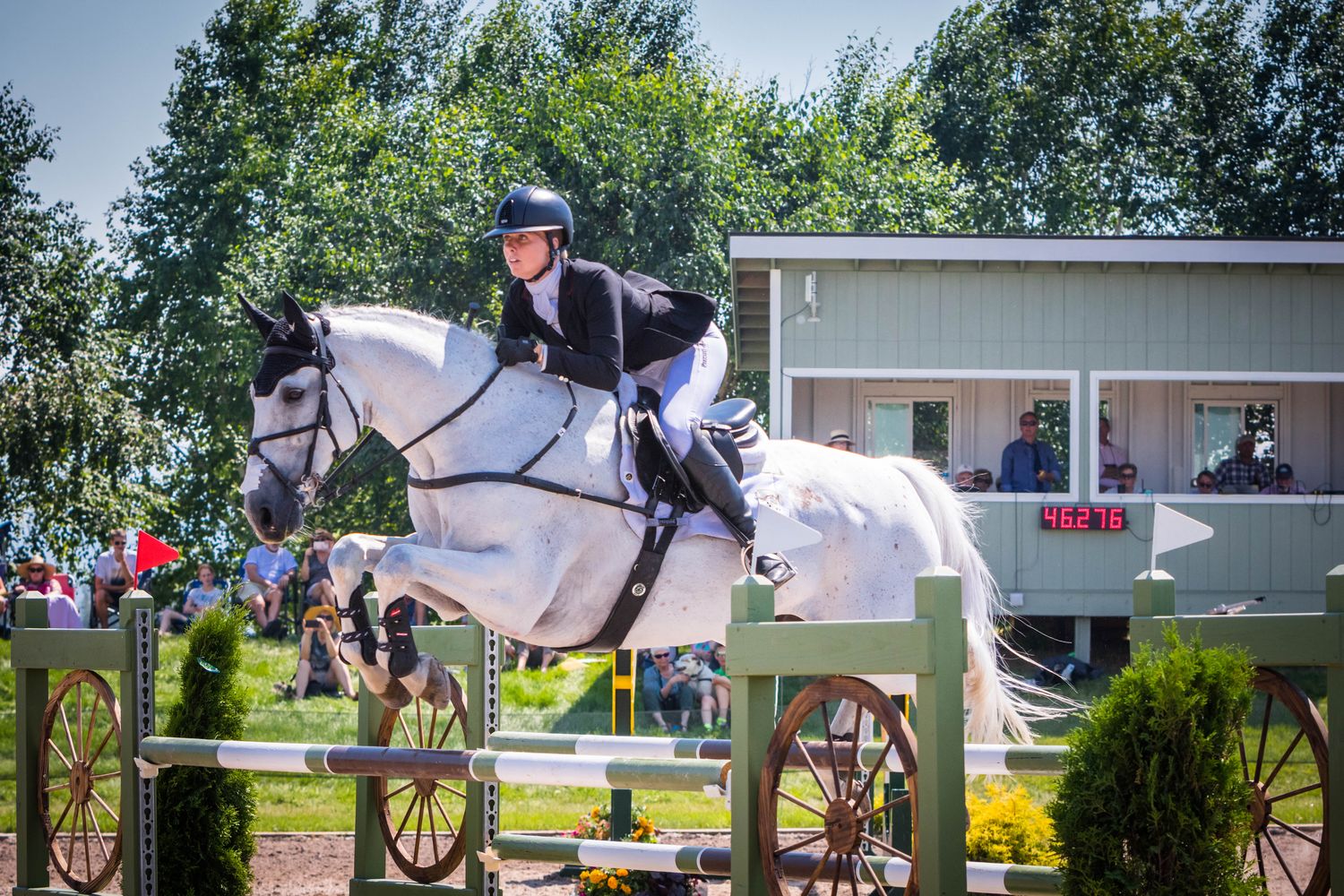 Caroline Martin and Islandwood Captain Jack added 4 jump penalties to finish in second place with a score of 38.9. The 12-year-old Irish Sport Horse who goes by “James” is owned by Caroline’s mom, Sherrie Martin. “I am really pleased with him. I wanted to come out here and practice going fast on cross country – fast but under control. He’s an amazing horse… and I am quite lucky to have a horse like him. He’s a horse of a lifetime for sure,” said Caroline.

She and James will probably be heading to the Maryland 5* this fall. Her advice for riders who hope to compete at the FEI level is to “Watch. Watch everything. Being here, even though you’re still in the U.S., it’s a little like being in Europe.” Caroline was also very genuine when she encouraged riders to strike up conversations with their role models and reminded us that “we all just ride horses for a living, and we care genuinely about each other.” 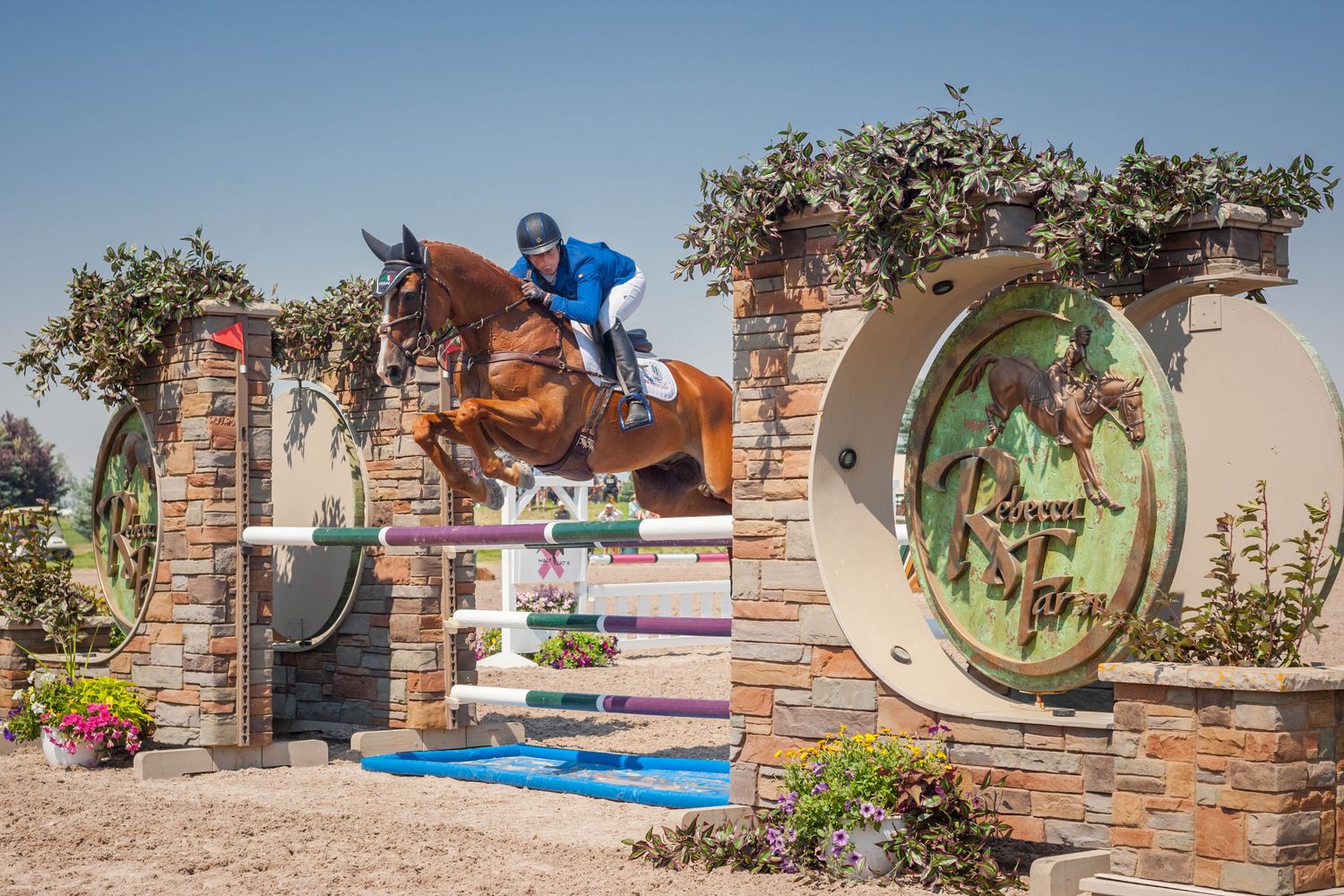 Jennie Brannigan and Twilightslastgleam had 8 jump penalties to finish in third on a score of 41.0. “Grampa” is an 11-year-old Thoroughbred owned by Tim and Nina Gardner. Jennie said she was hoping to be third this weekend, and she was happy to be in the [press] tent on Sunday. “That little horse has to try his heart out to compete at this level… I am just thrilled he tried as hard as he did because he has to overcome a lot to compete at this level.”

Jennie’s advice for aspiring FEI riders was to “Stay realistic about what we’re doing. Don’t take yourself so seriously that you don’t enjoy it.” She went on to say that it’s important not to let the highs take you too high, or the lows too low.

At the end of the day, this is a very challenging and dangerous sport and it’s all about keeping it fun and staying safe. Jennie spoke about the tragic death of event rider Annie Goodwin on July 14th and emphasized that it should serve as a reminder to all of us to be good to each other, and to help and care for each other. 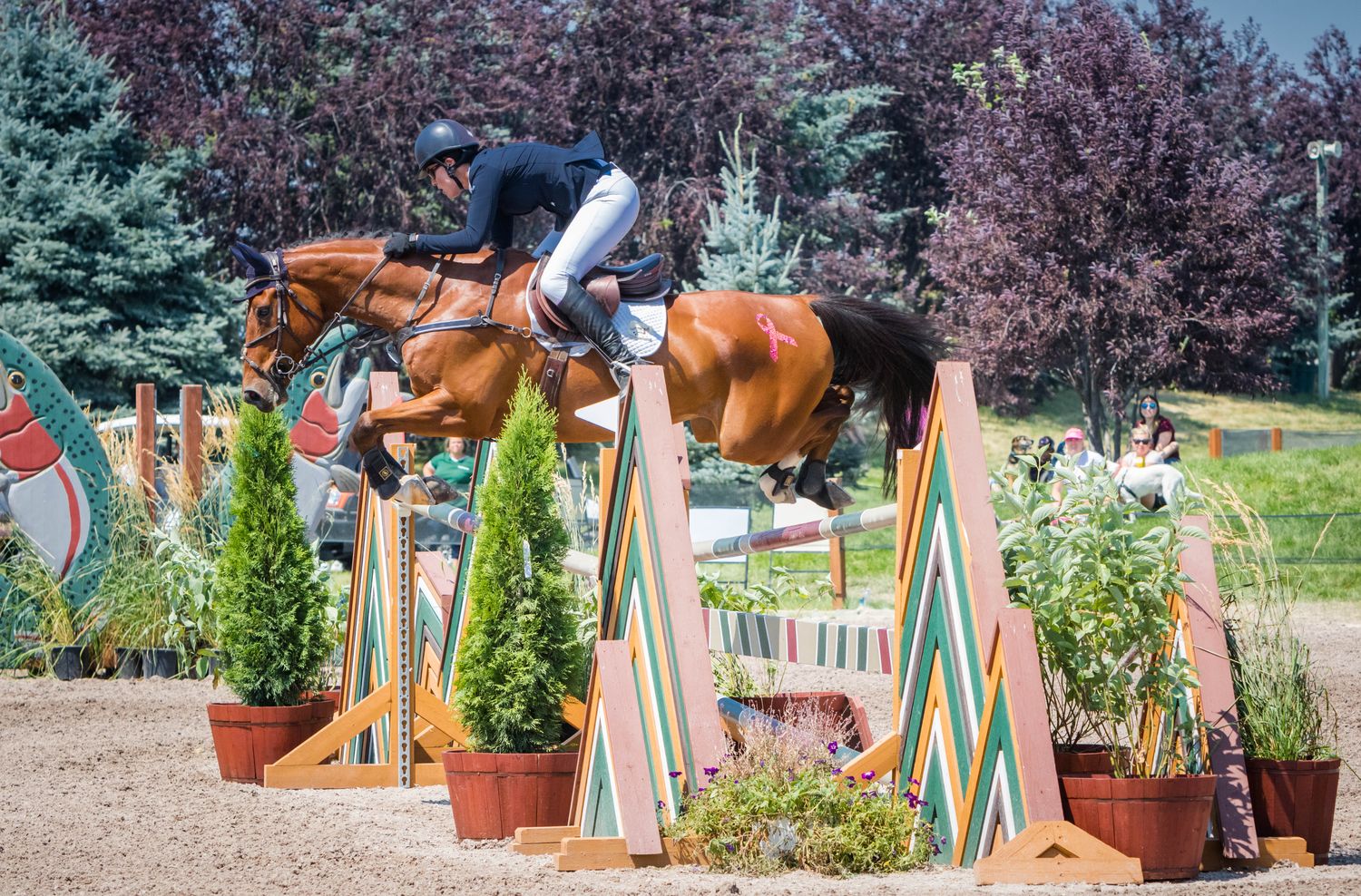 The final placings for the CCI4*-Short remained the same from cross country until the end of competition on Sunday. Maya Black maintained the lead to win first place with Miks Master C, a 9-year-old Swedish Warmblood owned by Laurie Cameron. Maya and Mickey added 4 jump penalties for a final score of 33.8. Giving advice for up-and-coming riders who have the goal of competing in the FEI divisions at Rebecca Farm, Maya said to be prepared. Practice and prepare, and understand what is expected. 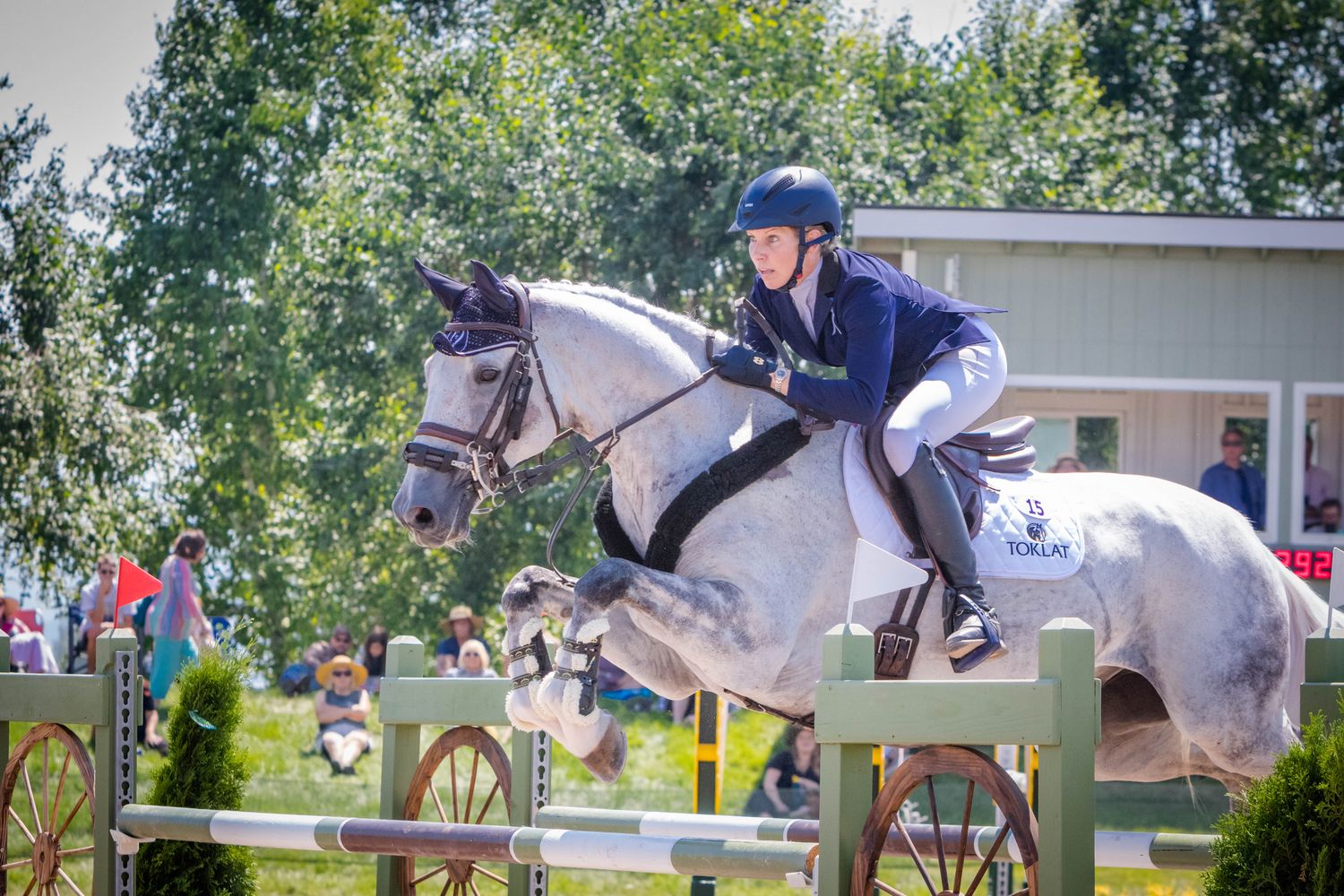 Liz Halliday-Sharp and Cooley Quicksilver added 4 jump penalties to finish in second place with a score of 43.6. The Monster Partnership owns the 10-year-old Irish Sport Horse. Liz, who was happy with her choice to come to Montana, said “What a great event this is, oh my gosh we had so much fun. It’s been an absolutely great event for the horses – beautiful weather, perfect ground, and a lot of atmosphere for them.” Speaking about The Monster’s show jumping round today, Liz said “I thought he jumped really well – he’s a bit out of practice. He was a good boy to just sort of pony up and come here.” In terms of next steps, Liz and The Monster will be heading to Pau for the 5*. 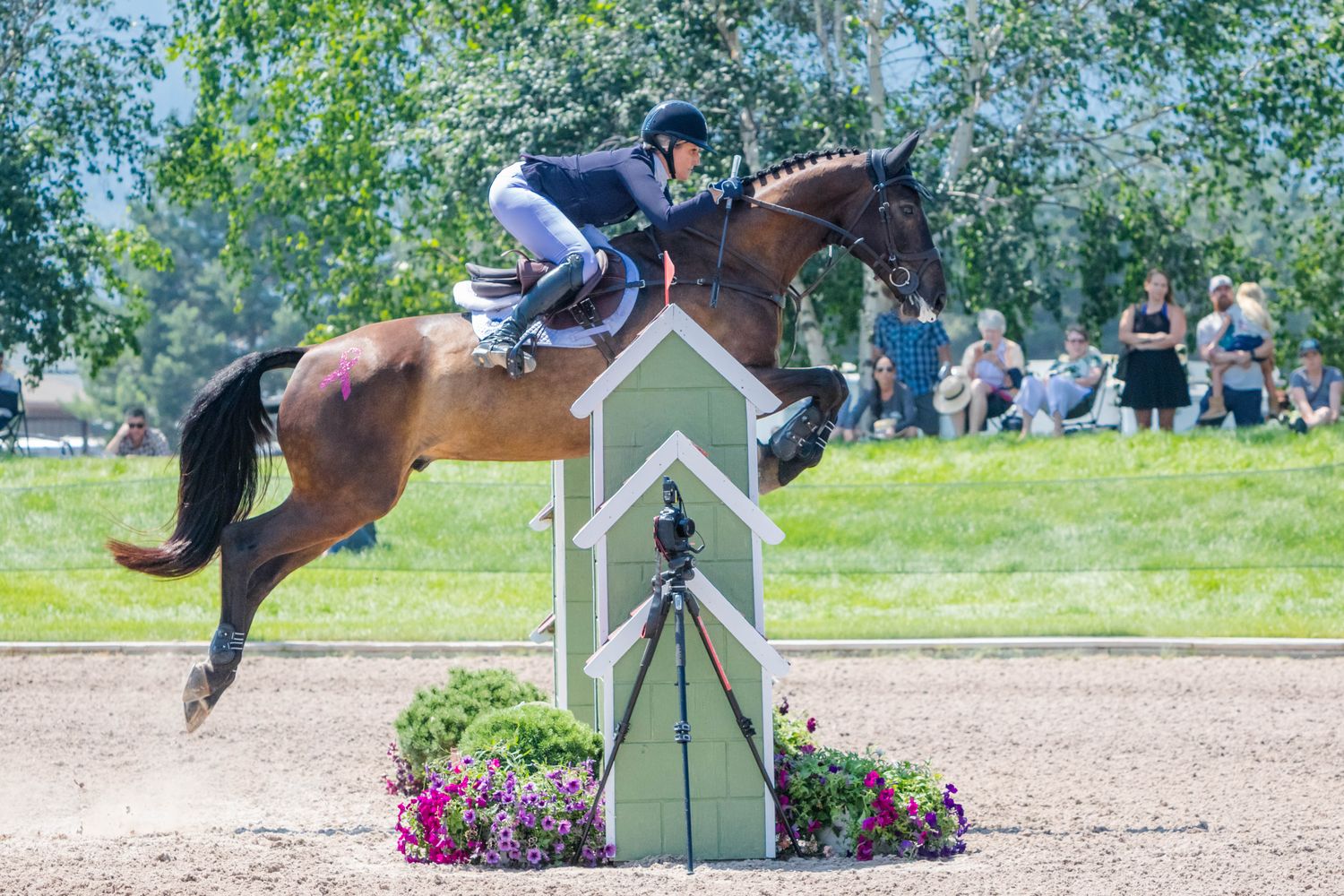 Rebecca Braitling and Caravaggio II, a 10-year-old British Sport Horse, jumped clear and added .4 time penalties, for a third-place finish with a score of 58.7. “Ernie” is owned by Arnell Sporthorses.

“He was so good! I was sort of thinking I want to take him to Morvan [Park] – take him east. He’s green and he needs experience.” Bec said that coming to Rebecca Farm in comparison to other venues is “off the chart. You come with really high expectations a lot of the time. There’s a lot more going on at an event like this… there are a lot more variables.” The additional variable make it an amazing learning experience for horses and riders. 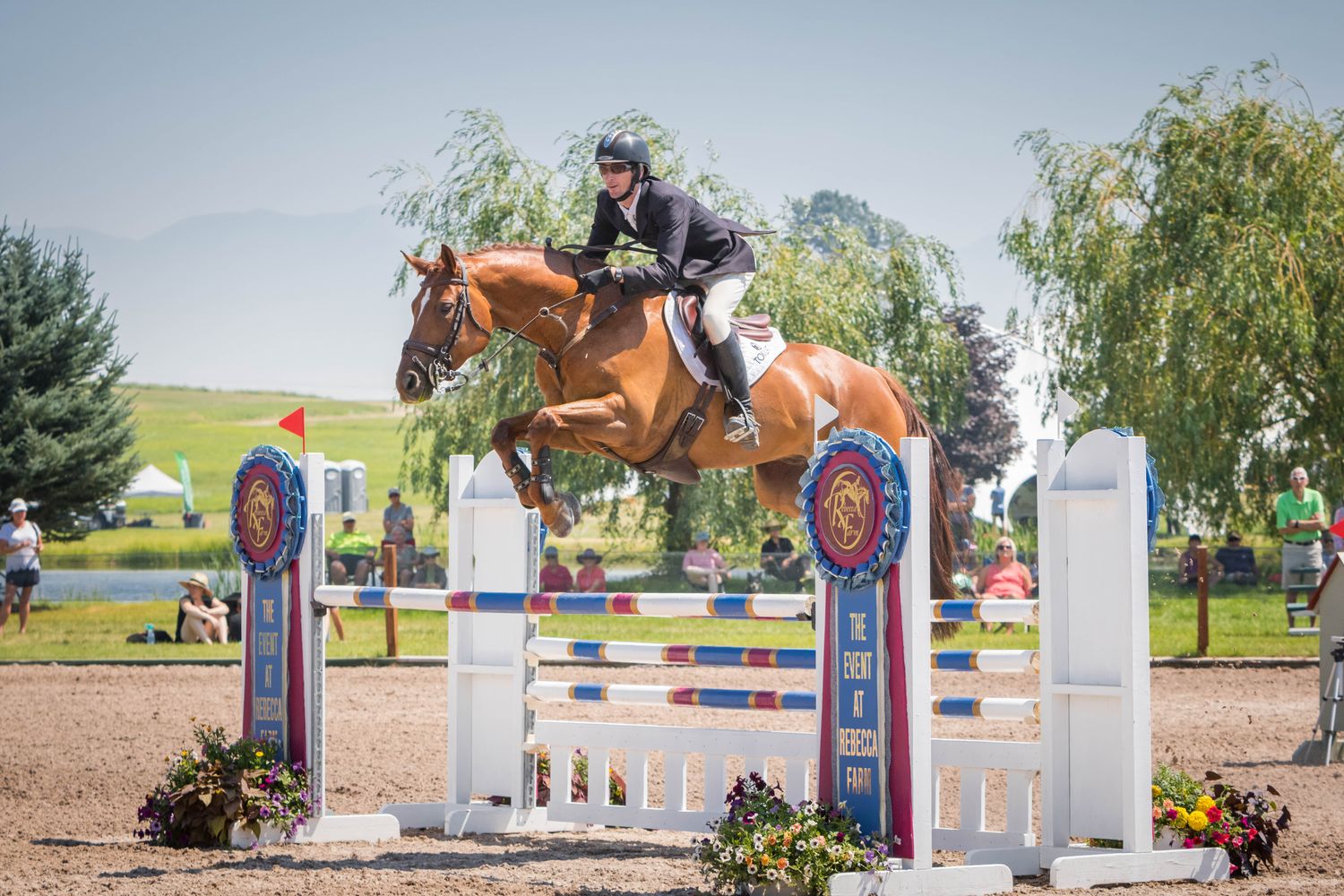 James Alliston and Nemesis, a 7-year-old Canadian Warmblood owned by Alliston Equestrian maintained their lead in the CCI3*-Long with a double-clear round for a final score of 33.1. “He was really good, really good. He is young but he has been a big winner already. His mind is excellent. He keeps a really level head and has the talent, but also “strength of mind” to come out on day one of competition and do a good job.”

Nemesis is a young horse and James commented that “It’s early in his career to do this, but they learn so much from coming here and going on the grass. Rebecca Farm really exposes them to how it’s going to be when they go to somewhere like Kentucky.”

James also grabbed the second-place finish in the CCI3*-L with Alliston Equestrian’s RevitaVet Calaro. The 9-year-old Holsteiner put in a double-clear round for a final score of 34.3. James said that Calaro and Nemesis have come up together. He used to always beat Nemesis at prelim, but at intermediate they switched that up. Calaro is a really talented horse, but his mind can be a bit trickier: “When he comes to a show he gets really excited. He learned a lot from this show – he got a bit tired on cross country, but I think that was good for him because he came out more relaxed today.”

James also wanted to send a “Big thank you to his owner and to Garyn [Heidemann],” who had him previously as a dressage horse, “because they gave him to me and allowed me to whatever I wanted with him.”

Lucienne Bellissimo and her self-owned Atlantic Vital Spark added 4 penalties for a rail and a third- place finish with a score of 38.1. The 11-year-old Irish Sport Horse who goes by “Ted” in the barn, did well in Montana on the “fabulous ground” and Lucienne was very complimentary of the excellent, consistent footing.

They made the long journey from South Carolina for the first time this year, and she plans to make The Event at Rebecca Farm an annual destination. Lucienne spoke highly of her entire experience in Montana, including a trip to nearby Glacier National Park. She also finished 7th in the CCI3*-L on her mare Tremanton (aka Ting Ting), a 9-year-old Thoroughbred owned by Horse Scout Eventing, LLC. Lucienne is planning to give the horses a holiday now, and then go to Octoberfest at Stable View this fall. 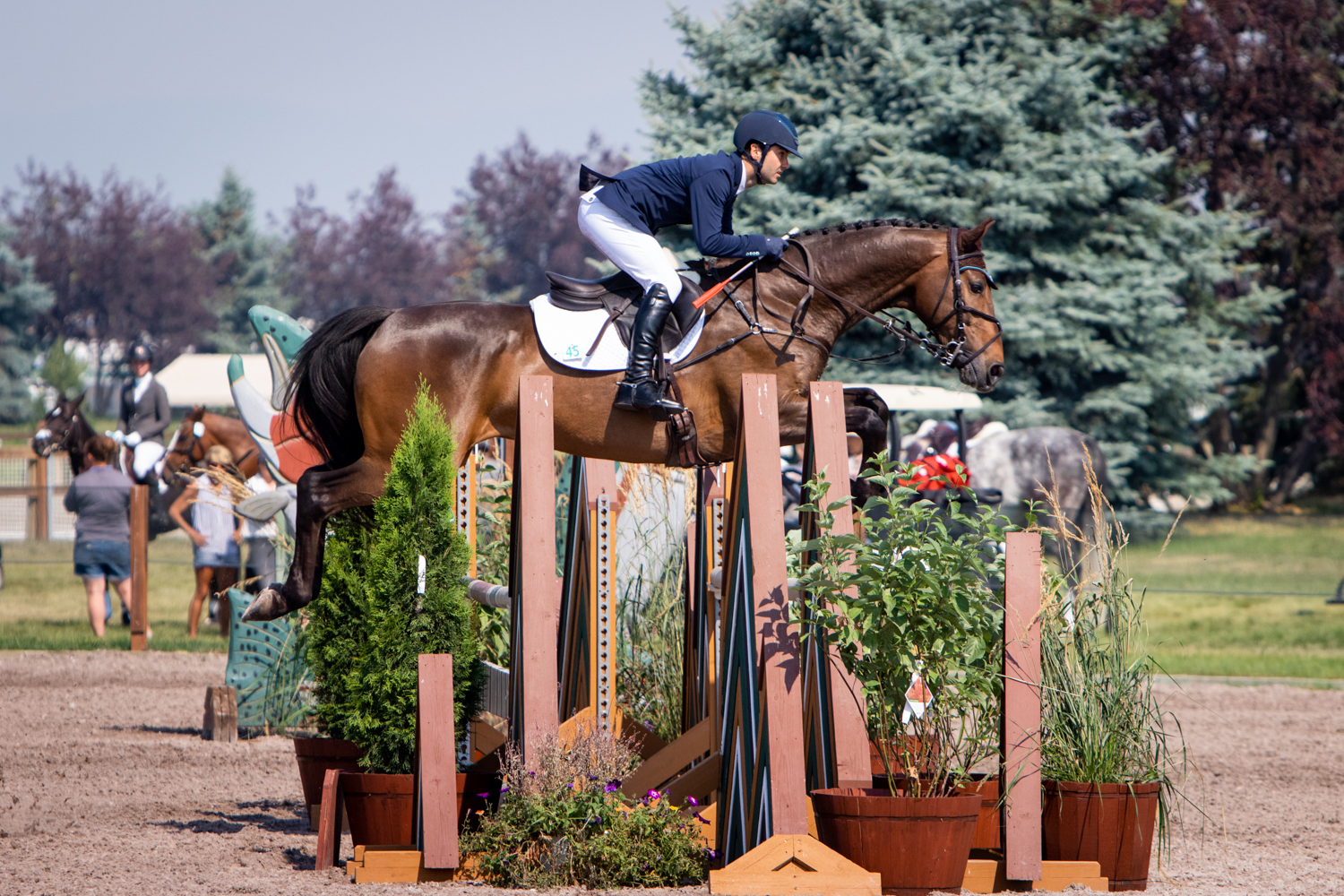 Tommy Greengard and self-owned Joshuay MBF maintained their lead to win the CCI2*-Long. Adding only one rail to their dressage score of 25.4, Tommy and Josh, a 7-year-old Dutch Warmblood, finished with a score of 29.4. “It’s been amazing… it was so great to bring him here. The goal was to get him here and I wasn’t sure it would happen… but he came and showed up for me in a big way. I really couldn’t ask for him to be any better. He jumped higher and higher, and worked harder and harder all weekend.”

Josh will stay at the prelim level for a while, although Tommy hasn’t decided exactly what’s next. He said, “I want him to feel like King Kong at the end of the year. He hasn’t put a foot wrong all year and I want him to feel his absolute best self before moving him up.” Tommy also won the Sr. Open Training A division on his dressage score of 23.9 on Andrea Pfeiffer’s Leonardo Diterma.

Maya Black and Laurie Cameron’s 6-year-old Hanoverian, Double Diamond C, also added just one rail on Sunday to finish second on a score of 31.0. “Overall, I was really pleased with him. He’s been a pretty consistent horse all along. I am personally a little bummed that I had a rail, but I was very pleased with him overall, all weekend.” Maya said “Petey” shows so much promise as a young horse and will stay at the preliminary level for a while. “He is entered right now for the AECs and then we’ll see what the fall holds. Maybe he’ll do another 2-Long in the fall, but otherwise we’ll keep chugging along.”

Alexis Larson and PL Diamond’s Inspiration maintained their dressage score throughout the weekend and consistently moved up the placings from 14 th after dressage, to 6 th after cross country, and into a third-place finish on Sunday. The 9-year-old Irish Draught, who goes by “Izzy” has been coming to Rebecca Farm with Alexis for four years now.

“She’s a jumping beast… picks up her feet, and is everything you could ask for in a good mare.” Alexis commented that “competing out on the toughest course with some of the best riders is really exciting. Have fun, and really ride what you have been practicing. Think about all of that stuff you have been preparing for – this is the moment!” Alexis is based in Carnation, WA and trains with Marc and Erin Grandia of Full Gallop Eventing.

Congratulations to all of the riders and horses – it was a fun and safe weekend at Rebecca Farm, and we look forward to more action in 2022!

ABOUT THE EVENT AT REBECCA FARM

The Event at Rebecca Farm presented by Montana Equestrian Events is held every July in Kalispell, Montana. One of the largest equestrian triathlons in the United States, The Event is also considered to have some of the world’s finest scenery. Each year it draws hundreds of riders of all levels, from amateur to Olympians. The 2021 Event celebrates the 20th anniversary of Rebecca Farm.

The Event at Rebecca Farm features thirteen courses ranging from novice to Olympic qualifier, which were originally developed by world-renowned course designer, Mark Phillips. In 2012, Scottish equestrian Ian Stark redesigned the Rebecca Farm courses. Known for his immense
contributions to eventing, Stark has won multiple Olympic medals and was inducted into the Scottish Sports Hall of Fame in 2010. 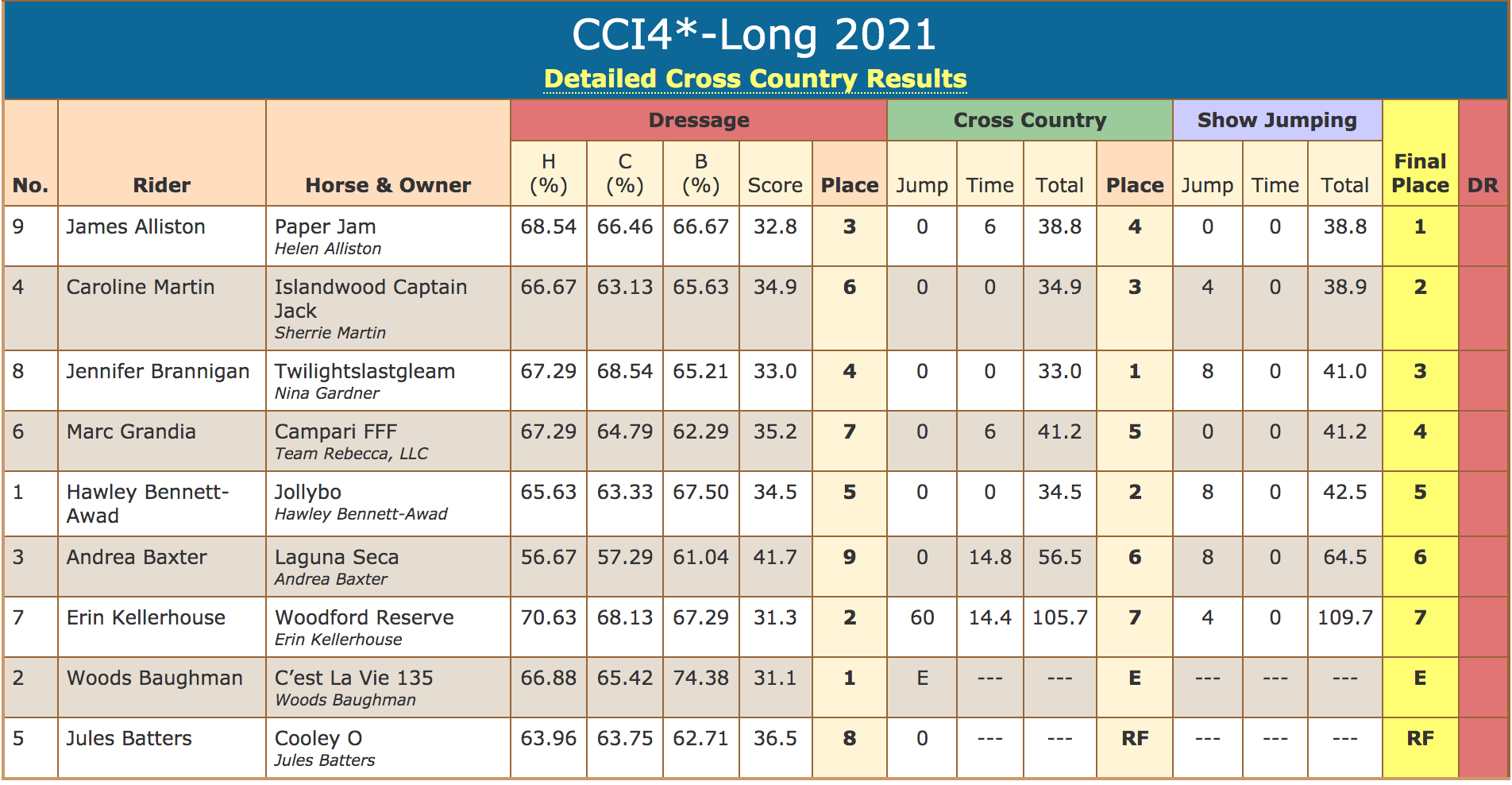 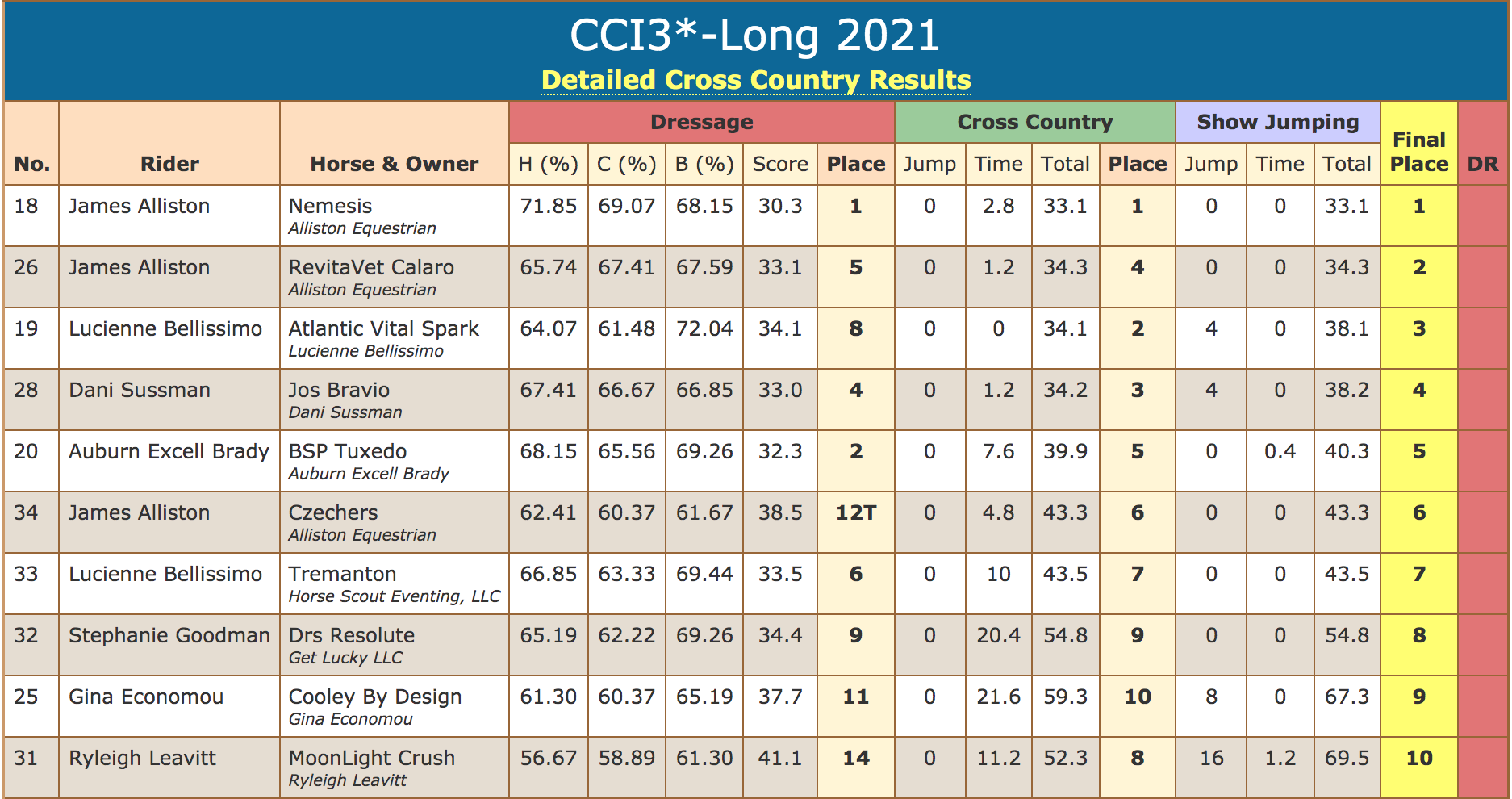 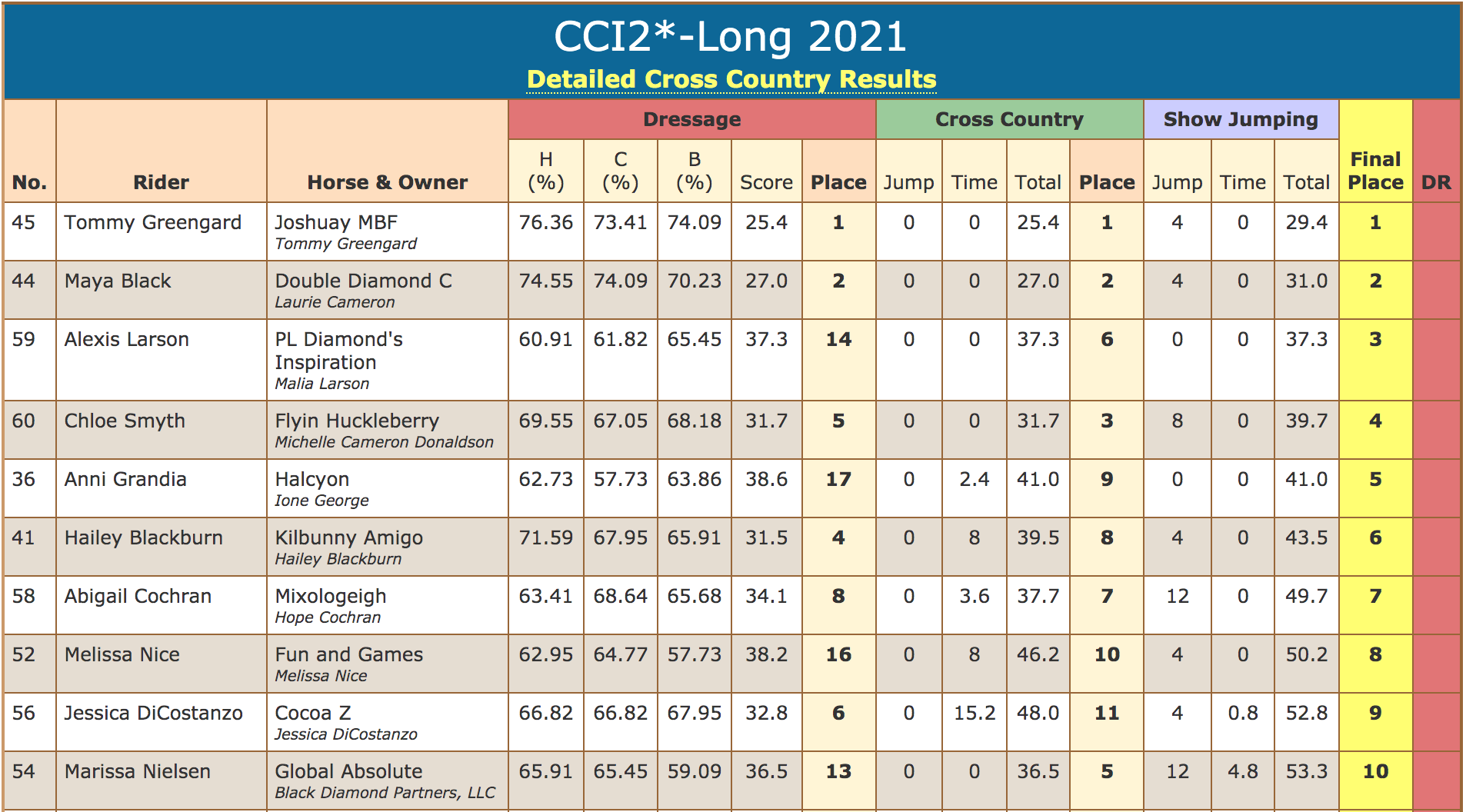