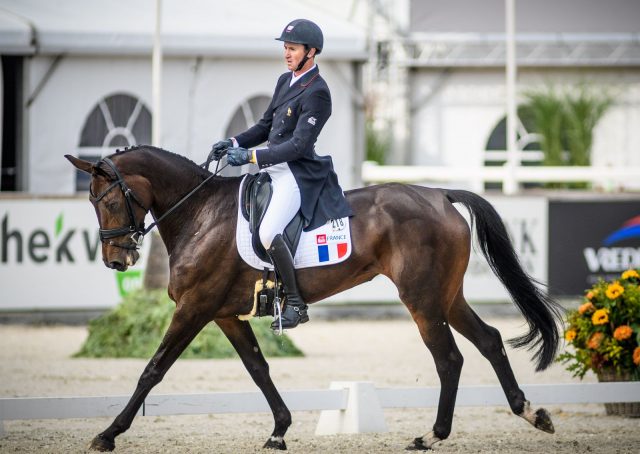 France’s Tom Carlile has announced the withdrawal of 10-year-old Birmane from Tokyo’s eventing competition in a statement on social media this morning. The Selle Français mare, who finished in the top ten when representing France at the Nations Cup finale at Boekelo as an eight-year-old, was France’s strongest entrant in this year’s line-up as the country comes forward to defend its team gold won at Rio.

Travelling reserve and Rio competitor Karim Florent Laghouag will now step into the team proper with Triton Fontaine, leaving France without a substitute combination to use if any of their team members are unable to complete the competition.

“It is with a heavy heart that I must announce that my mare will be withdrawn from this Olympics,” reads the statement, translated from French. “I wish Karim & Triton Fontaine great games, I am sure they will best defend the hopes of the whole French team.”

Birmane’s withdrawal follows a bout of myositis, a condition that can cause muscle inflammation and weakness after exertion – more colloquially known as tying up.

“It was following the galloping work done earlier this week that Birmane suffered from myositis,” the statement continues. “It is not a secret that she has suffered from this muscle pathology from the past. Nevertheless, it had been more than two seasons since my team had worked to manage it to perfection to make her ready for this Olympic deadline.”
Birmane will remain in Tokyo until the end of the eventing competition, after which she will travel back to France with the rest of the team.
“Seeing this dream escape from our fingertips…. We feel inconsolable,” says Tom. “We had been warned that weather conditions would be formidable. Despite all the measures taken by the organizers, my mare can’t acclimate to these conditions. She will come home healthy once her buddies pass their games, and we hope to see her soon at the top of the podiums.”
Tokyo 2020 Olympics: Website, Latest News, EN Olympic Digest Newsletter Signup, EN’s Instagram, EN’s Twitter, EN’s Coverage