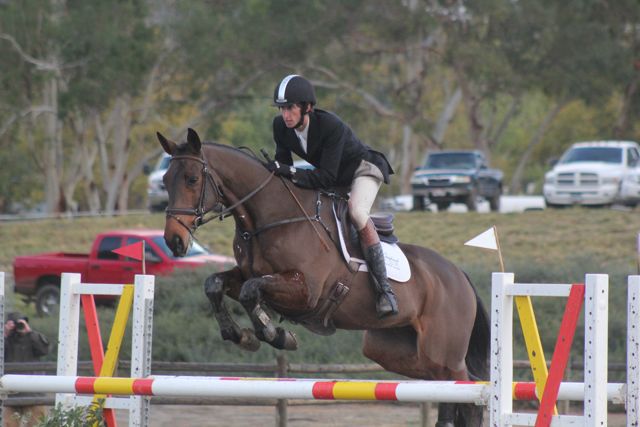 What a weekend for James Alliston. A win in the CCI*, second in the CCI** and a big win in the CCI***. I’d say that is something to be excited about. I’d love to say I know James personally, but I don’t. However, I did spend time under his roof in England when grooming for Bonnie Mosser. So, I’ve never really gotten to know him, but, I did get to know his parents. If James is half as nice as his parents, then he is one of the nicest people you will ever meet. Oh, and my roommate once pulled Parker’s mane.

In very sad news, the equestrian world lost one of it’s finest athletes over the weekend. Hickstead, a horse who has captured the hearts of so many, sadly lost his life in Verona, Italy this past weekend. Hickstead has more accomplishments than many of us could ever dream. On behalf of everyone at EN, I would like to extend our deepest condolences to everyone in Hickstead’s life. A truly remarkable athlete who will never be forgotten.

Congrats to EN’s, Abbie for her third place finish at Rubicon. Boyd took the blue in the OP on Crackerjack with an impressive 23.9. There were a ton of competitors at Rubicon. Many of those competitors had multiple horses. For many this was the last event before a little down time from competition. However, for those who aren’t preparing to stuff ourselves with turkey and other glorious foods for weeks on end, the break doesn’t happen in regards to the day to day riding.
Lauren Kieffer took the win at the T3D at Rocking Horse. I love the T3D. It is such a good way for horses and riders to gain valuable knowledge.  Lauren was busy this weekend with several other great finishes among many divisions. Rocking Horse runs a fantastic event. The footing is great all year round which allows for many horses to run across the ground at all of their many horse trials.
The Carter’s had a very successful weekend at Rocking Horse. Congratulations to all of their students are their great weekends. Check out the Carter’s blog for tons of pictures. [Carter Eventing]
Galway — [Scores]Rocking Horse — [Scores]Rubicon — [Scores]River Glen — [Website]
Bettina Hoy has helped so many riders around the world. Her dressage work is nothing less than impressive. Known for greatly helping Michael Pollard in his flat work, she has also helped other such as Allison Springer, Boyd Martin, Will Coleman and many more. While blogging about her fall season, Bettina talks about helping the American’s at Burghley. [Bettina Hoy]
Have you ever wanted to learn how to ride a horse? Well here ya go. Disney is going to show you how. Watch this short clip and all your wildest riding dreams shall probably come true. [How to ride]
Another year, another win. Waylon Roberts has done it again- he has won the Indoor Eventing at the Royal. Coming second- Michelle Mueller. Third goes to none other than Mark Todd. The Royal hosted sold out stands and wild crowds. This competition is becoming wildly popular and is growing in attendance each year. Congratulations to Waylon and all the other competitors at the Royal. [Indoor Eventing]
A new study is suggesting that hyperflexion of the horses neck may not actually cause stress. Using thermography, researchers studied a horses neck in different positions while on the lunge line. Based on the results, there is thought the “rollkur” may not actually cause stress. Read more HERE.
Best of Blogs: Red Hawke Eventing
Best of Blogs (2): Holly Hudspeth Eventing
Lendon Gray has been inducted into the USDF Hall of Fame
Hug your horses. Go Eventing.