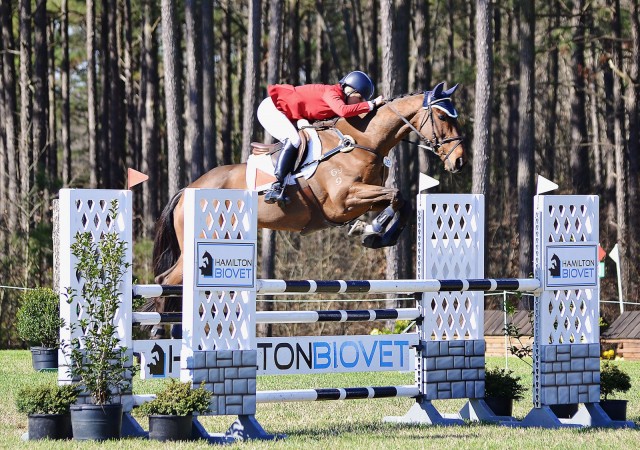 Jan Byyny and Inmidair at the Carolina International CIC3*. Photo by Jenni Autry.

Jan Byyny has announced on the Surefire Eventing Facebook page that Inmidair has been withdrawn as an alternate from the U.S. World Equestrian Games squad due to an acute soft tissue injury in his foot. Jan posted the following statement today:

I regret to tell everyone that I am withdrawing Inmidair (JR) from the nominated entries for the WEG. He sustained an acute soft tissue injury of the foot that will require a period of rehabilitation.

I was so happy and excited to be named as an alternate for the WEG. It was such an honor to be included with the other amazing riders and horses, and to have a chance to represent my country. I am also so thankful I was awarded a Land Rover Competition Grant and given the opportunity to go to either Burghley or Blenheim.

I cannot thank all my supporters enough, those who have cheered me on and been there with JR and me through thick and thin. I am so sad and disappointed for him, myself and my whole team, but JR’s soundness and well-being are always my first priority.

I want to wish the U.S. Team great luck in Normandy, they are training well, we have a really strong group of horses, riders, owners, supporters and of course, an excellent coach in David O’Connor. I will be there to support and cheer you on. Good luck this weekend at Great Meadows, what a fantastic opportunity to have everyone there at such a great venue.

Jan had a steller spring season with Inmidair, a 1999 New Zealand Thoroughbred gelding owned by Jan and Dick and Jo Bynny. Their spring culminated with an alternate slot on the U.S. WEG team, and Jan immediately expressed her excitement for the selection. It was also announced last week that Jan had been named as a recipient of a Land Rover Competition Grant to compete at either Burghley or Blenheim this fall.

This news comes as a huge disappointment for Jan, but JR is certainly receiving the best possible care as he rehabilitates from his injury. The EN team extends our heartfelt support for Jan, who is a consummate horsewoman and a true competitor.

We will post more updates on this story as they become available.