George Morris descended upon the Midwest last weekend, armed with sarcasm and brilliant training tips. EN reader Jana Lyle was able to check an item off of her bucket list and participate in the clinic, and she was kind enough to send in her thoughts on the weekend. Many thanks to Jana for sending in her report, and thank you for reading! Do you have a clinic report or other story you’d like to share? Email it to us at [email protected]. 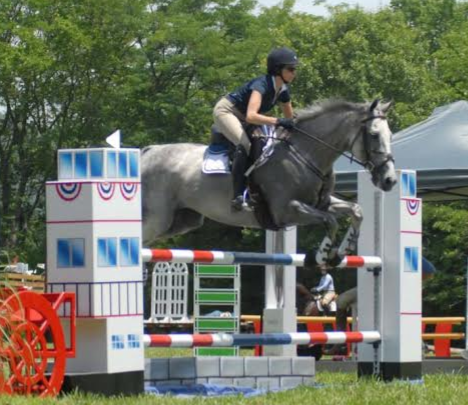 For the past 25 years, the first thing I turn to when my Practical Horseman magazine arrives each month is the George Morris Jumping Clinic. I audited a clinic of his years ago in Chicago and hoped to someday go back and ride, but never had the horse, the time or the money (or confidence). Riding in a clinic with him has always been on my bucket list, but as the years passed, I didn’t think it would actually happen.

I was actually in the ICU with a lacerated spleen — I was kicked in the ribs — a little over a month ago when it was announced he would be hosting a clinic in town. I couldn’t pass that opportunity up, so I secured the last open spot before I even knew when the doctors would allow me to ride again.

Fortunately, I only needed two weeks off but still felt horribly unprepared as the date arrived; the sore ribs hindered the hours of no-stirrup work I had planned on putting in (turns out we were spared that work in the clinic anyway). I spent the week before obsessively cleaning and polishing every piece of tack and repeatedly bathing my poor grey horse.

The clinic was hosted at the gorgeous Altamonte Show Stables in St. Louis, Mo., home of Brody Robertson Show Jumps. The facility has an amazing jump field, complete with banks, ditches, brush and a water complex. I was hoping we would get to ride in the jump field because I expected George would incorporate the natural obstacles and terrain into his courses, and I was not disappointed.

The clinic started with quick introductions and a check of position and tack. We had all received the memo about having a stick and spurs; solid, stainless steel stirrups; a loose running martingale (no standing martingales were permitted); no earplugs or bonnets; and the obvious (I would hope) collared shirt, polished boots and clean tack, so there were no tack changes at first glance. 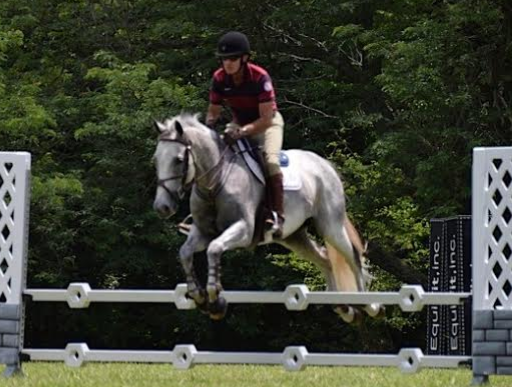 My monoflap saddle gave away the fact that I am an eventer, and George explained a lot of eventers ride with their toe forward or even in, a carryover from their dressage position, rolling their leg away from the horse. Unfortunately for my dressage, I have yet to figure that out, so at least George was happy with my leg to start with.

Right away at the trot he had me soften/lower my post and raise my hands. My horse tends to travel downhill, so raising my hands helps to keep his poll up. We did a little work with shoulder-in at the trot then counter-canter (we did not canter on the natural lead at all during the flat portion).

We warmed up over a four-stride line trotting in and cantering out in five strides one direction and cantering in and trotting out the other, always halting on a straight line. We then added a small vertical going downhill set over a ditch in a direct five strides or bending six. Most of the horses in the clinic had not dealt with terrain issues or ditches; a few had issues, but they were resolved quickly.

As we were moving to the next exercise George called me over and had me hop off. I knew he was going to ride my horse, and honestly I was not quite as excited as I should have been. I got my horse straight off the track as a 3-year-old, and I’ve had tons of amazing help from the ground but I have done all the riding. A few of my trainers have sat on him for a few minutes here or there, but no one else has ever jumped him, and I’m kind of proud of that, but it’s George Morris!

George used my horse as an example to show how to pick your distance and place your horse at the jump, demonstrating long and short distances over a small vertical. My horse has developed a bad habit of chipping in at a longer distance (an over-correction from the scary long distance he preferred when we first started jumping), so George wanted me to work on using my leg and spur off the ground when we got the longer spot. He wanted everyone to stay off their horse’s backs and in a forward seat all the time while jumping; he explained there is a place for sitting down or being behind the motion, but it is overused.

On the second day, we worked on shoulder-in and leg yielding at the trot, then flying lead changes on a figure eight. He had me go first; he was looking for us to straighten our horses across the diagonal first, then ask for the lead change with the new inside leg. There was no opportunity to mention that I’ve never schooled changes with my horse, so I was nervous it would be a disaster but was pleasantly surprised. We didn’t nail every one, but by the second loop each direction, he was getting it and had a very clean, straight change to his less-preferred lead to end with — I was thrilled.

The courses on the second day involved another vertical set over a ditch in a little gulley, a small trakhener, an up-bank, a bounce set on top of a burm, an oxer built over a stone wall and a hedge — we had so much fun with all of it.

I had kind of stayed under the radar up to this point and avoided any harsh words until we moved on to a one-to-one stride triple. George had me go first and wanted me to be sure my horse didn’t add. He told me to use my stick going in, and I made the mistake of using my seat as an aid coming out.

Unfortunately, despite a good PA system, it was very difficult to hear and understand George; he would critique your ride as you were jumping, so many of the riders didn’t hear what we needed to correct or how he wanted you to correct it. I knew he didn’t want me to sit, so I stayed forward and used my stick in between both jumps — this was the wrong answer.

We were so close to the end of the second day, and I’d almost made it through without a serious reprimand from him, but then I wouldn’t have had the true George Morris experience without it. The next time, my horse “carried me through” the combination, which was what George was looking for.

I was so pleased with my horse; he really held his own among the fancy hunters and equitation horses. George made it clear he is a fan of the Thoroughbred, often referring to warmbloods as “half-breeds” and commenting that several of the horses did not have enough blood in them.

I’m so appreciative to have opportunities like this; it was definitely a once-in-a-lifetime experience for me and well worth it!