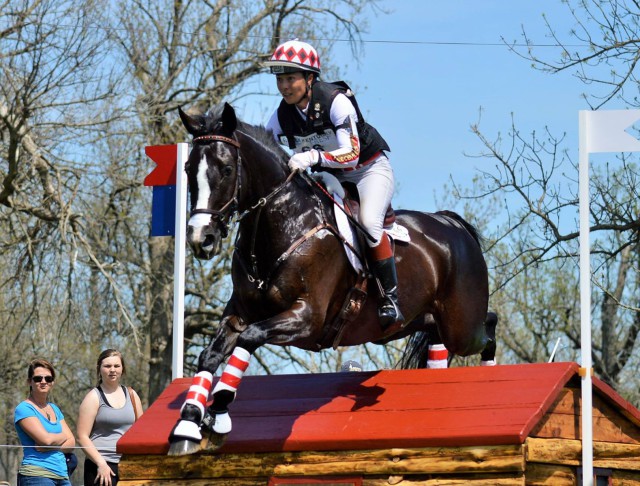 Jennifer McFall and High Times had their first go at Rolex last year and are gearing up to take on Rolex again—and by the looks of it, the pair is bringing a lot of confidence with them.

Jennifer encountered a rough dressage ride at Rolex; sandwiched between Mark Todd and William Fox-Pitt for their dressage test, she had to work hard to get Billy to be calm as they rode through their test in the packed and windy stadium. The pair went on to complete their first CCI4*, however, and returned to California with a positive experience and plenty of homework.

Dressage is one of the first things they focused on when prepping for Rolex. The goal was to get Billy very familiar with the test so he would avoid getting wound up. “It’s a complicated test, especially at the end,” Jennifer commented. “I think for Billy, it’s important that he feels super comfortable with the movements.”

Nailing down dressage was at times elusive of the pair; when competing in the CIC2* at Fresno County Horse Park they earned a 64.3 after dressage, while last fall they came out of dressage with a 55.8 at Galway Downs International event in October 2014.

Now, it seems their focus on dressage has been paying off. Jennifer and the 11-year-old Holsteiner gelding placed second with a dressage score of 27.4, earning their lowest dressage score yet in the Advanced division at Copper Meadows last week.

To avoid both her and Billy being exhausted by the time they enter the stadium ring, Jennifer and her team planned to start with an intensive conditioning schedule early on and taper off as the event nears. It has taken commitment to a rigorous schedule but it seems that Billy has been happier than ever to work hard and the pair are feeling a whole new level of confidence in 2015.

The improvement shows, as their run at Twin Rivers in late February had both of them confidently attacking cross-country and show jumping to land in sixth in their Advanced division. Not to mention, Billy also put in a solid performance in cross-country and stadium at Copper Meadows, placing second. Jen is especially thrilled with how smooth things are coming to Billy.

This weekend at Galway Downs, Jen and Billy earned a 48.2 in the CIC3* dressage and had a few rails down in show jumping, a late decision to get some extra practice, before withdrawing. Now, Jen and Billy will be focusing on putting the finishing touches on their fitness before making the trip to Kentucky.

“I can just tell that Billy is less stressed and so less timid when we go out into our competitions. Everything is just feeling way easier,” she said.

As if the pair needed an extra boost of confidence, Jen’s eventing community and the Morgan horse community she grew up with plan to go to Rolex and cheer the pair on.

“Everyone is so supportive and would like us to see another positive go around,” she commented, “My mom’s side of the family is even planning their family reunion at Rolex, so family gatherings are planned with my show schedule!”

But even with so much excitement building towards Rolex, Jen plans to take everything one step at a time. “I am trying not to get too wrapped up in Rolex right now. Anything could happen. I want to focus on the now. Galway is coming up, I’m really excited for it and that is my main focus,” she said.