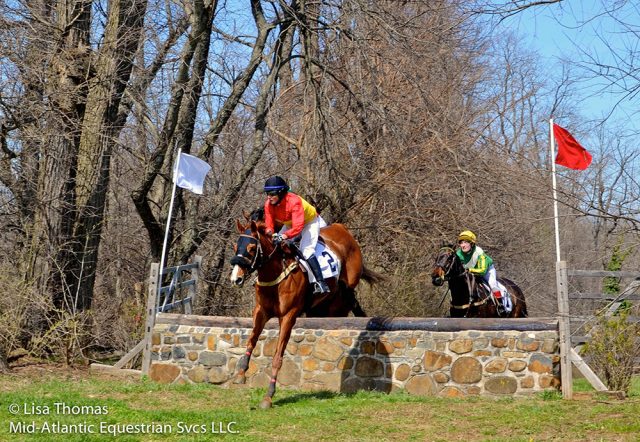 Jennie Brannigan and Joshua G. over the stone wall at Brandywine Hills. Photo by Lisa Thomas.

Jennie Brannigan checked a big item off her bucket list on Sunday when she piloted Joshua G to a win in her timber racing debut at the 75th running of the Brandywine Hills Point-to-Point Races in Northbrook, Pennsylvania.

It wasn’t the first time she’s donned jockey silks, as she piloted Where’s The Beef to a fourth-place finish in a flat race at the Aiken Spring Steeplechase in 2015. But timber racing is far different from any other spin she’s taken aboard a Thoroughbred since she first started galloping racehorses for Michael Matz four years ago.

“You’re just flying and hoping that you meet the last couple jumps galloping out of stride because that’s the difference between winning and not. It has been such an awesome experience, and I’m glad I’m riding Joshua G because he’s a great jumper,” Jennie said.

“I keep laughing saying I’ll try not to get too addicted, but it really is such a rush. It’s pure adrenaline. The jump jockeys have some serious nerve to hop on horses they don’t even know. If you think eventers are crazy, timber racing is really crazy.”

Timber races typically run over three to four miles with horses and riders jumping solid wooden rail fences. Two of the most prestigious races in the country run at the Maryland Hunt Cup in Glyndon and the Virginia Gold Cup in The Plains. 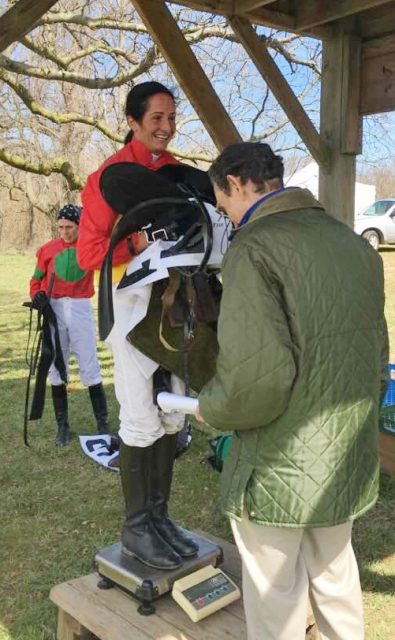 Jennie Brannigan on the scales at Brandywine Hills. Photo by Sara Ike.

The opportunity to give timber racing a try came when Jennie found herself riding beside acclaimed steeplechase trainer Kathy Neilson this past winter while foxhunting with Mr. Stewart’s Cheshire Foxhounds.

“I had just heard that the girl who rode Joshua G last year had become a professional flat jockey, and I told Jennie I was looking for a rider for next year. Her ears pricked and she said, ‘I’d love to ride over timber,’ so we decided to have her school the horse during the winter,” Kathy said.

Kathy has trained Joshua G for the past three years. A 2006 gelding (Run Softly – Search for Reality, by Regal Search) bred in Maryland by Jason Cole and owned by Armata Stable, Joshua G has won $26,191 in 19 career starts, including running twice at the Maryland Hunt Cup.

“He’s just such a lovely horse, and I remember Jennie saying right away that she adored him,” Kathy said. “She connected with him, and I think she appreciates what a wonderful animal he is. That makes my job easy. She appreciates him, and that means everything to me.”

With Jennie and Joshua G clicking together in their schools and gallops, they targeted a schooling race at Cheshire’s Averell Penn Smith Walker Memorial Course at Plantation Field on Sunday, March 26. After competing four horses at Carolina International that weekend — and placing third in the CIC3* with Tim and Nina Gardner’s Cambalda — Jennie packed up her trailer and hauled home to Pennsylvania in time to ride in the race the next day.

“It was unofficially a very good race against very good horses, and the horse seemed very happy,” Kathy said. “He jumped well. She finished second to a really good horse in that schooling heat, and she was competitive.” 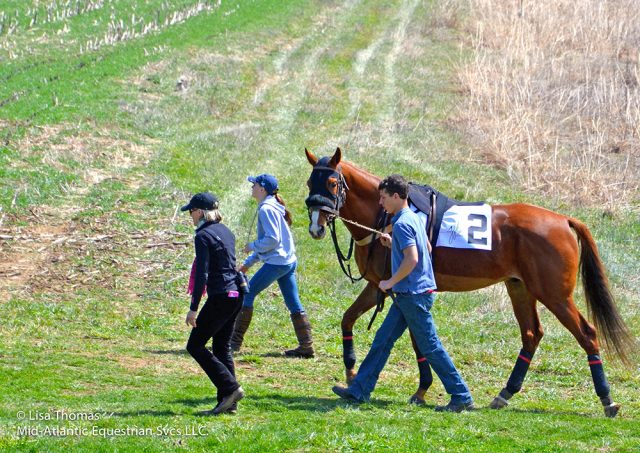 Kathy Neilson, front, leads the way to the start with Joshua G at Brandywine Hills. Photo by Lisa Thomas.

With a schooling race under their belts, Jennie and Joshua G teamed up once again for her first official timber race this past Sunday at Brandywine Hills in the fifth race on the card, the Betty Baldwin Meister Memorial Ladies Race.

Jennie’s longtime friend and champion jump jockey Jody Petty walked the course with her that morning, noting that the ground was a bit wet after steady rains in Pennsylvania. But the race day had dawned bright and sunny.

“I’m glad that I’ve hunted and ridden racehorses for four years now. I also felt a lot more comfortable after the schooling race since I had experienced it once, so I knew what to expect. I think all of that was helpful because it’s a lot faster than anything we do as event riders. It’s really not comparable, and I can see now why people say that,” Jennie said.

“You have to be comfortable leaving the ground from a lot farther away from the jumps, and also riding down bold to the jumps. You don’t set the horses up for the jumps at all. If you come up deep to a jump, you just support the horse.”

While there were only three horses in the field, the Ladies Race proved to be competitive from start to finish, with Bethany Baumgardner and Battle Array sitting right behind Jennie and Joshua G nearly the entire way.

“The last fence can be pretty tricky because you can be driving with your head down and riding hard,” Kathy said. “Jennie put her head down and sent him at the last fence and won. To me as a trainer I was really happy to see that she had that much horse left and that she wasn’t worried about the speed with the racing pace.”

In looking back on the race, Jennie said being able to trust Joshua G made all the difference. “It comes down to what kind of horse you’re sitting on. You have to 100 percent trust the horse because you can’t get in his way. I knew where he was going to leave the ground every time. There was never a minute I felt scared.” 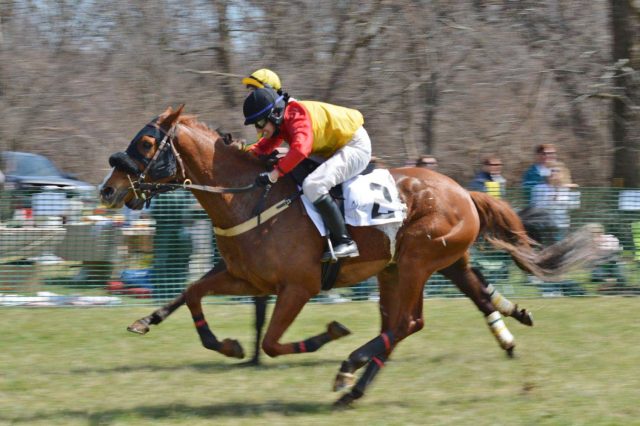 Jennie Brannigan and Joshua G driving for home to take the win at Brandywine Hills. Photo by Nina Ligon.

‘Something I was supposed to do’

Now Kathy and Jennie are looking ahead to the Fair Hill Point-to-Point Races on April 16, where Joshua G will run his final prep race before the Maryland Hunt Cup. Jennie will also be competing four horses in Fair Hill’s April CIC and Horse Trials that same weekend.

If all goes well in their final prep race at Fair Hill, Jennie will then ride Joshua G in the Maryland Hunt Cup on Saturday, April 29, which coincides with cross country day at the Rolex Kentucky Three-Day Event.

“There is no one else that I would like to ride my horse at the Hunt Cup,” Kathy said. “At the same token we have to get there, and the next step is to get through Fair Hill. I’m very grateful Jennie is riding the horse, and if he does make it to the Hunt Cup then I would be very happy to have Jennie sit on him.”

Jennie acknowledged that riding in the Maryland Hunt Cup one month after making her timber racing debut is a bit like “an event rider winning their first Advanced and then going right on to Rolex.” At the same time, she is confident in her preparation and, above all, incredibly grateful to Kathy for giving her the opportunity.

“I’m going to stay an event rider for sure, but timber racing is something I’ve always wanted to do. Sometimes opportunities like this present themselves, and you feel nervous but you know you can do it. It has felt like something I was supposed to do from the start.”