For 673 accepted trainers, the journey to the Retired Racehorse Project‘s 2019 RPP Thoroughbred Makeover has begun! Over the next eight months, four of those trainers will blog their journeys, including their triumphs and their heartbreaks, successes and failures, for Eventing Nation. Read more from EN’s 2019 Thoroughbred Makeover Bloggers: Lindsey Burns, Hillary McMichael, Clare Mansmann, Jennifer Reisenbichler.

I’ve been working in “Corporate America” for quite a while now. About seven years ago, my manager at the time made a comment on my annual review that I’m the kind of person who likes to “jump off the diving board.” To this day, I don’t know if she meant it as a compliment or not, but I took it to heart and ran with it like it was.

So what does that have to do with eventing, or my journey to the RRP? My answer to that is “more than you would ever imagine.” This blog is supposed to be about George going to his first Combined Test. But my brother Caleb passed away almost three weeks ago, and at this point, not a lot else goes through my mind.

He was 26, and he was an addict, “just like me.” Somehow, by some twist of fate, I have always been addicted to horses and the high that goes along with eventing, instead of heroin. You might not sit around and think about it a lot; I didn’t either until the past few weeks. Your heart beats faster, you get a few butterflies, you might want to throw up but you don’t. Instead you listen to the count down and then gallop off, or you jump a 3’ fence for the first time, or you swing your leg over the new kid on the block and hope the first ride really is romance. We jump off the diving board, and we hope for the best, because that is who we are. We are blessed that our drug has four legs, and I will never take that for granted again.

I always try to get my Thoroughbred Makeover hopeful out for the first time in a quiet environment (I highly recommend it actually!). But I was in a funky head space and I just wanted to enter something. Anything to give me a goal to work towards, so I didn’t have to time to sit around and think. So I pushed Liam and George (as a reminder, George is my Makeover hopeful this year, and Liam and I did the Makeover in 2017) a little more than I should have, because I needed to push myself. Because I couldn’t just stand on the diving board. So we all three went to the Paul Frazier Combined Test at the Kentucky Horse Park to start the year, a show I’ve never entered before.

If you’ve never been to the Kentucky Horse Park, let me give you a few hints:

Let’s just say that the boys stepped up to the plate. Liam put in the test I’ve been waiting for in the sandbox, then jumped his Novice course very exuberantly, and George was a star. You never really know how a horse is going to react until you put them in a situation. George has always been the quiet, chill dude at home. However until you put them on a trailer at 4:45 a.m. to go to a new place, with a bunch of other horses and an insanely decorated stadium course, you never really KNOW.

I’m chalking it up to his 10 year old brain being amazing and capable of processing the scenery on the fly. I know most people post their ISO ads and say 3-7 years old, but let me say you are missing out, the older men are where it’s at! 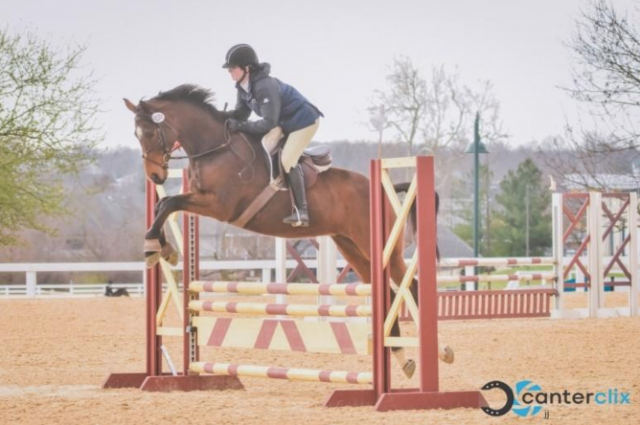 We have a ton to work on, our dressage test was not the best. To be fair though, it was probably our 20th ride and the 2nd time he had ever seen a dressage arena. It was certainly his first time in a crowded dressage warm up. He had moments of what is to come, but it was just not quite there yet in the ring, and that is 100% ok. It’s March, and I know I asked a lot.

We headed up to stadium and were greeted by a course worthy of the FEI levels. They pulled out all the stops. There were heavily decorated fences, there were non-fence decorations in the ring, the fences were maxed for the level, OMG, I ACCIDENTALLY ENTERED A BIG BOY SHOW RIGHT OFF THE BAT. Gulp.

OK, let’s trot around warm up and pretend we know what we are doing. Let’s jump the warm up jumps. I learned that if I put my leg on a little bit in a new place, George jumps. And that is how our round went in the ring. We trotted almost all the jumps, but we got more confident after every single one. We both jumped off the diving board together. And we ended up with a “royal” purple ribbon, earning 7th out of 16 in the division! 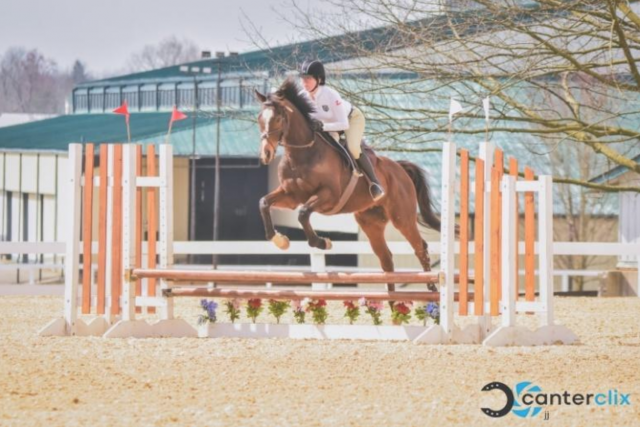 George says “What flowers, no problem.” Photo by JJ Sillman.

I know we all hear this a lot … stay in your lane. Do what is best for you and your horse. But what happens when life falls apart and you can’t even stay in your your lane? When you can’t get out of bed, much less swing a leg over. It happens to all of us. It might be a tragedy, or something we deal with on a day to day basis.

The last three weeks of my life have been a nightmare to put it mildly. But if anything, I’ve learned to rely on my horses, that they are there for me, even when I ask more than I should, or am less than my best. You never know what might happen if you jump off that diving board and have an OTTB to catch you.