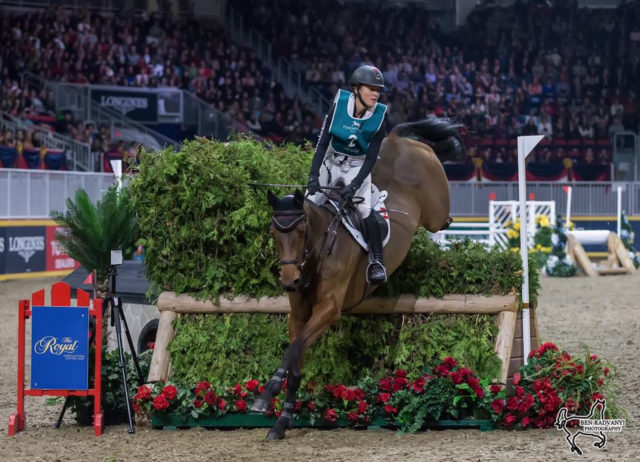 Jessica Phoenix and her Trakehner mare Abbey GS captured the $6,000 top prize of the Horseware Indoor Eventing Challenge at the Royal Agricultural Winter Fair in Toronto last night. The capacity crowd roared their support and approval as Jessica and the 16-year-old mare, owned by Charlotte Schickedanz and bred at Galten Farms just north of Toronto, made the twisty, challenging course look easy.

Abby was Jessica’s alternate mount for the 2015 Pan American Games in Toronto and is her preferred ride for Indoor Eventing. Phoenix modestly gives full credit to Abbey GS for the win: “For this event you want to have something that is super careful because if you leave the show jumps up you have a good chance of winning, and Abbey GS is such a fantastic jumper and so brave and so bold that I couldn’t have a better horse for this.”

Saturday night’s course in front of the loudly enthusiastic crowd was changed for the second round. The distances between the first four fences gave the riders a chance to open up their horses and get up some speed to thrill the audience while the placing of the fences, especially later in the course, called for careful, balanced riding while going at speed.

“They did a fantastic job of organizing those courses; the layout was exceptional,” Jessica said in discussing Captain Mark Phillips’ design. 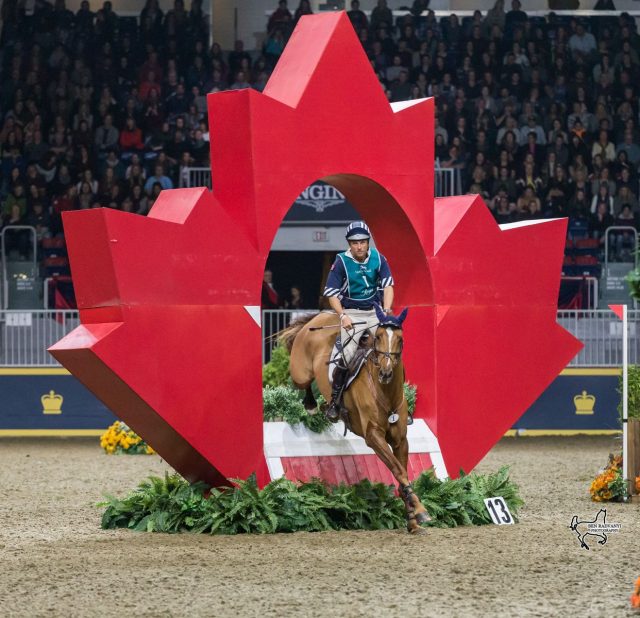 Indoor Eventing at the Royal gives top eventing athletes a chance to demonstrate the sport before a loud and enthusiastic crowd of people who may never normally see an eventing contest in its regular outdoor format. However, Indoor Eventing poses some unique challenges for riders more used to the pace of long outdoor courses.

Boyd Martin, who placed third on the trusty chestnut mare Kyra, laughed as he talked about warming up in a “parking lot” for the course. He was referring, of course, to the low ceiling warm-up area just off the main arena: “My head was close to the roof a few times,” Boyd said. He also joked about having a mere 15 minutes to walk and memorize the course instead of a couple of days to analyze and work out the striding.

Boyd’s plan for the second round was to “go as fast as possible and leave all the rails up”. He and his spectacular jumper, the Canadian-bred Warmblood owned by Christine Turner from Texas, did exactly that. The pair posted one of the fastest times of the night but a “really, really annoying rail yesterday” proved to be very costly as it meant that they were carrying 5 penalty points from the first round so they had to settle for third place. 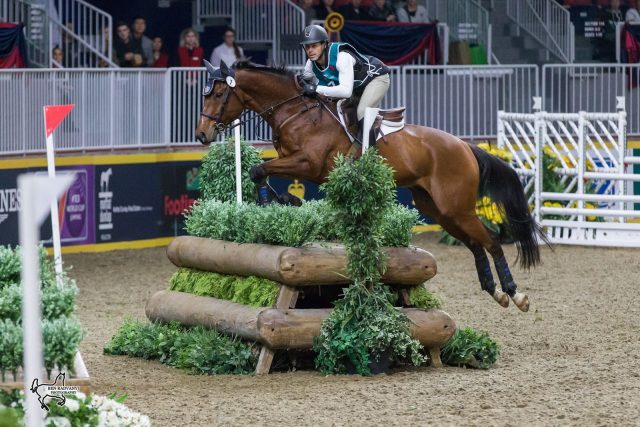 Brandon McMechan grabbed second place behind Jessica riding in his first ever Indoor Eventing Challenge. He was thrilled with the performance of his 8-year-old off-track Thoroughbred “too slow for racing, but fast enough for this” Oscar’s Wild.

McMechan explained that at this time of year the gelding was usually “on vacation” and he laughed that he felt the horse was doing him a favor by coming to the Royal to compete. A nice positive and conservative ride which left all the poles in the cups and saw no awkward moments at the imposing cross country style fences meant that the pair left the arena happily in second place.

The youngest rider in the competition and the leader after the first night, 25-year-old Rachel McDonough, blazed around the course with the boldness of youth on her side. Unfortunately, as the crowd was cheering them on to victory, Rachel and her 18-year-old Thoroughbred Irish Rhythm had a rail down at the very last fence, an oxer.  The slight hiccup dropped them down to fourth place.

Holly Jacks-Smither and More Inspiration had an inspired round as the pair took any fast route they could to shave valuable seconds from their time. They gave the crowds quite a thrill but the 5 penalties they had incurred from the first night kept them in fifth place.

Waylon Roberts, an 8-time winner of this event was riding his old friend John and Michelle Koppin’s  Lancaster. They posted a textbook second round. Waylon was so thrilled with his clear, deft and classy ride that he gave a fist pump at the end of it. He excited the crowd by doing a wild gallop around the ring and tried to high five some of his many fans who were leaning on the rails cheering him on. 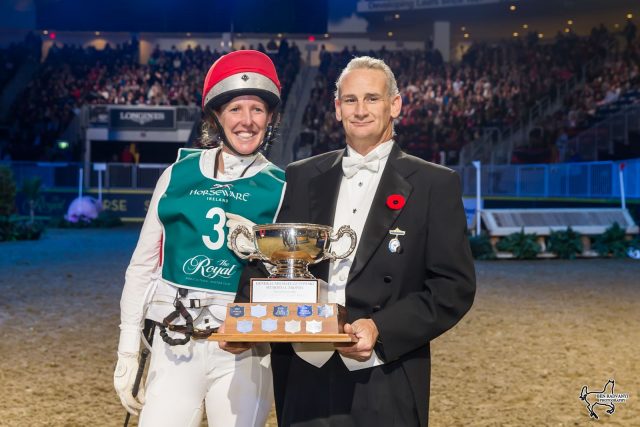 Selena O’Hanlon, riding Linnea Given’s Uptown Girl, broke the crowd’s heart when, after a lovely clear round, she and the dark-bay Hanoverian mare were another to have a rail down at the last fence on course.

Selena’s night improved as she was presented with the Michael Gutowski Award as the highest placed Canadian in the FEI International Standings this year. She leapt to her high placing internationally when she and her long time partner Foxwood High, owned by John and Judy Rumble, made history by being the first Canadians ever to win at the Dutta Corp. Fair Hill International CCI3*.

Selena was thrilled to be presented with an award honoring the late General Michael Gutowski, affectionately known as “the Colonel”.  Gutowski was a decorated Polish war hero. A career cavalry officer and an accomplished horseman, he rode in the 1936 Berlin Olympics as a member of the Polish Equestrian team. After his distinguished and heroic war career fighting  in the 1st Panzer division fighting alongside  the Allies after the invasion of Normandy, he came to Canada where he became trainer of the Canadian Olympic Equestrian Team.

Gutowski was an Inaugural Member of the Canadian Eventing Hall of Fame, inducted in 2009 as a Builder.  Coincidentally John Rumble, owner of Selena O’Hanlon’s mount Foxwood High, was also inducted into the Hall of Fame in the same year as a member of the 1956 Olympic Bronze Medal Team along with his horse at the time, Cilroy.

Gutowski brought the classical form of European equitation to Canada. His training principles are the foundation of the coaching system today. He was also the coach/trainer of many of the riders that have competed for Canada at the Olympics as well as other international championships. Show jumper Ian Millar, Captain Canada himself, is honored to have it known that he trained extensively with “the Colonel” in his youth. 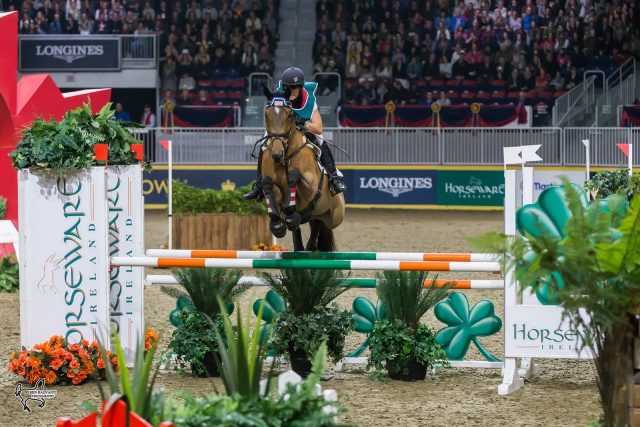 Turning again to the Indoor Eventing results, Autorytet, the handsome grey 15-year-old Polish Warmblood/Thoroughbred cross owned and ridden by Dasha Ivandaeva, objected to the bright pink wooden pig he was asked to jump when first presented to it but he overcame his reluctance and leapt neatly over it the second time to bring his rider home in eighth place.

Colleen Loach and Brooke Massie’s Serendipity, having incurred a technical elimination on the first evening, put in a lovely, fast round. Kendal Lehari’s usually reliable RF D’Orbalia, had a bad day at the office and took exception twice to the job at hand which led to elimination for this normally spectacular partnership.

Indoor Eventing at the Royal Winter Horse Show is definitely a highlight of the 8-day show for the enthusiastic spectators and also for the riders who are pleased to be able to showcase their sport in such a fun and supportive atmosphere.

Boyd Martin said that he had no idea that the Fair was this “awesome” or he would have come many years before. His many fans in Toronto will be delighted to hear that he hinted that he would like to come back in the future.