This article was originally published back in May.  However, I think it’s worth another read.  Sometimes we all get caught up in the moment and that’s when disappointment seems to hit the hardest.  But when you step back, things take on a greater perspective.  Jon Holling didn’t make it to the Pan Ams this year, but I have no doubt in his future success.

When I started speaking with Jon Holling about being a guest blogger for Eventing Nation, I knew that he would be absolutely perfect and this first post doesn’t disappoint–Jon writes about a message today that I consider one of the most important we have ever published on Eventing Nation.  Jon has served eventing in a variety of capacities, including as a four-star rider, a well respected coach, an event organizer, and a leader on various committees and organizations including as Chair of the USEA’s Professional Horsemans Council.  Jon is known quite appropriately in such committees for putting the interests of eventing above his own personal goals and convenience.  I have personally trained under Jon with great satisfaction and he has been a good friend of mine and Eventing Nation for many years.  Jon along with his wife Jenn and their son Caiden operate Holling Eventing out of beautiful Willow Run Farm in Ocala, FL.  If you could only read one article on Eventing Nation all year, this post by Jon would be the one to read.
—- 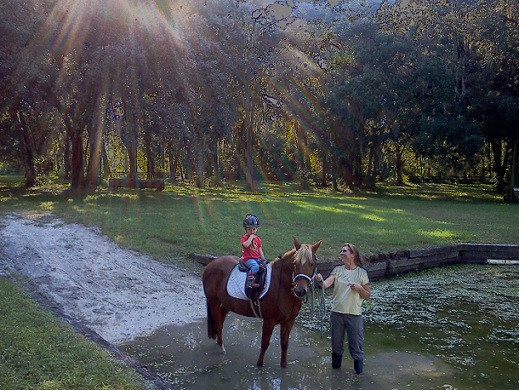 When I started to think about writing for Eventing Nation I went through the obvious list of topics.  Those included things involving horsemanship, equitation, competition schedules and even a review of what is going on with my personal string of horses.  While I probably will touch on those topics at some point (I do love to talk about my horses!) the topic that really jumped out at me was finding a balance in life.  I am not talking about a balance while riding but instead a balance between your family, horses and business.  I placed those three groups in that order specifically to remind myself what the order of priority should be.  Too often I watch young professionals in this sport getting the order of priorities in their lives mixed up.  I suppose early on in life it’s ok and even necessary to occasionally put the horses or business ahead of family, but at some point you do have to get back to what is truly important.

Because I am a selfish event rider, and I am very focused on my own goals, I will use my experiences as an example.  I started out in the Event world as a very self motivated 19 year old working for Peter Gray in Canada.  I left my family, friends and girlfriend at the time back in Wisconsin so that I could chase my dream of being a professional in this sport.  If I had to do it over again I would not change a thing about those first five years of my career.  It was during that time that I met my wife, learned the program I have based my entire career upon, and met some of my closest friends. Under Peter’s eye I was able to move up from preliminary to advanced in a year and a half.  In 2004 I had two horses entered at Rolex Kentucky.  I somewhat naively had expectations of competing in Athens at the Olympics.  After a slightly less than average dressage, I set out on cross country intent to show the selectors, and the world, that I was the real deal.  However, a disappointing stop at the coffin at fence 7a put all those dreams to rest.  On the walk of shame back to the barn I was overcome with the realization that everything I had worked for was lost.  I had let down a list of people who had supported me.  That list included my wife, my parents, my owners and my friends.  Later that day, after taking care of the horses, I sat in my car with Jenn.  She was great, but what could she say really?  It was over for at least the next four years.

That’s when it hit me.  I had been so focused on “the dream” that I had missed the real point. The Olympics is my goal and I work daily in my quest to achieve that goal, BUT there has to be balance in order to be successful.  It is that balance that motivates you to work a little harder on the good days, and persevere on the tough days.  As I said to Jenn in the car that day, “This can’t be all that there is.  One bad day cannot be the end of everything”.  From that moment on I reorganized my list of priorities and put them in a proper order – family, horses, and business.   Creating a family is the single greatest achievement that anyone can accomplish.  For some that means kids.  For others that means working to maintain close ties to parents or siblings .  Three years ago our son Caiden was born.  That day was the single greatest day of my life and I cannot imagine anything being as special or rewarding.

Now, let me be clear.  I am not suggesting that if you’re stressed out or depressed to go and have a kid.  I promise they will only add to the stress.  I am after all writing this while I am waiting for Caiden at the dentist’s office.  Not exactly the most relaxing day.  What I am saying is, don’t allow yourself to get so caught up in the moment or the dreams that you have, that you forget to enjoy where you are and the people around you.  I heard a great quote on TV the other day “sometimes you have a dream for so long it becomes a fantasy”.  Go ahead and dream, in fact dream big, but don’t forget what made you get into this crazy sport in the first place.  For me it was the ability to be around my family, friends, and horses all while still being able to run a business.  What a great life we all lead.  How many people in this world can honestly say they get to do what they love while being surrounded by the people they love?  While I work daily for the goal I am actually living the dream.

We have some answers on Downtown Harrison.  It has been a slow process of of diagnosing what has been a very minor lameness from the beginning.  Will went in Monday for a bone scan and several x-rays.  Long story short, we did not find any one thing that has caused Will significant problems.  We did however find several small things that when added up have caused him some trouble.  After several lengthy consultations with our team of veterinarians, including Dr. Christiana Ober and Dr. Lisa Cassinella, we have come up with a treatment plan.  The prognosis looks great and as of today Will is sound.  We thought seriously about competing at the Chattahoochee Hills CCI** next week but have decided to give Will a much deserved vacation instead.  Downtown Harrison is a very special horse and he has been on the fast track his entire career to this point.  He will get four weeks of down time and then start getting legged up for what will hopefully be a successful advanced season next spring.  On a personal note I want to thank everyone that has sent us well wishes.  It was disappointing to be left behind, but in the end it is good news.  Will looks terrific and we expect big things in the future.  GO USA!