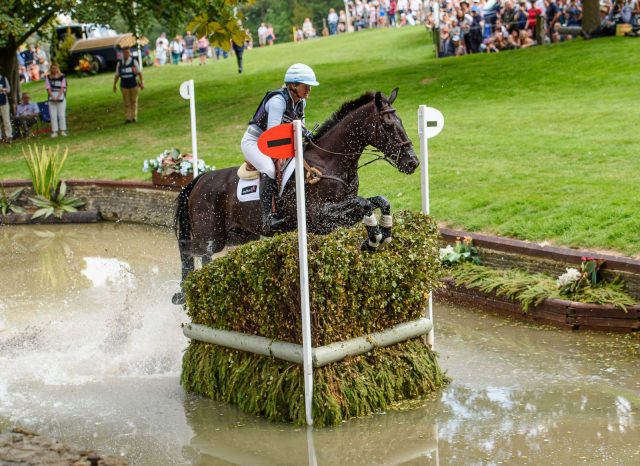 Jonelle Price and Classic Moet deliver the only clear inside the time of the day – despite a significant kit malfunction. Photo by Nico Morgan Media.

Jonelle Price and Classic Moet have become the first winners of the Avebury Trophy at the Land Rover Burghley Horse Trials after delivering the only clear inside the time of the day — even without a functioning stopwatch. They romped home three seconds inside the 11:20 optimum time, ultimately finishing fourth in the event.

“Jonelle Price’s round on Classic Moet was the only one of the day to be inside the time — but that wasn’t the deciding factor in awarding it to her. She did it more easily than the others, and still had time to add a stride at the final two fences,” says Captain Mark Phillips, who presented Jonelle with the award before the final session of showjumping.

“In terms of conserving the energy of the horse, being one second over the time — as Piggy March was on Vanir Kamira — is a better solution [that being under the time], but Piggy and her mare didn’t look quite as ‘easy’ over the last three fences,” continues Phillips. “I thought the other two outstanding rounds came from Bubby Upton [Cola III] and Tom Jackson [Capels Hollow Drift], because they also made it look easy, and the best cross-country performances are those that do that.”

The Avebury Trophy is a new prize at the Land Rover Burghley Horse Trials. Generously donated by Rosemary and Mark Barlow, owners of three-times Burghley winner Avebury, it was be awarded for the best cross-country round of the day, as judged by Captain Mark Phillips.

Avebury was bred by his rider Andrew Nicholson, whose children gave the grey son of Jumbo his nickname, ‘Buddy’. Avebury started his eventing career with Andrew’s wife Wiggy, but Andrew took over the reins in 2007. In 2009, Andrew and Avebury won the CCI4*-L at Saumur, and took the first of their three consecutive Burghley victories in 2012. As well as those three CCI5* triumphs, the pair had an outstanding record at Barbury Castle, winning the CCI4*-S there four times. They were British Open champions at Gatcombe in 2014. Avebury retired from competition in 2016, and sadly had to be put down due to a malignant tumour in his jaw later that year. He is buried in the garden at the Nicholsons’ home at Westwood Stud in Wiltshire.
Rosemary Barlow, who enjoyed so many great days with Andrew and Avebury, said: “Buddy was at his most brilliant at Burghley, and he and Andrew made the cross-country track here look easy, which it certainly is not. We thought that to present an award to the rider who delivers a cross-country round that makes it ‘look easy’ would be an appropriate way to remember Buddy – and also to pay some tribute to Andrew, who retired from competing at the top level last autumn but who won Burghley five times in total, and who is rightly celebrated as one of the greatest cross-country riders we have ever seen.”