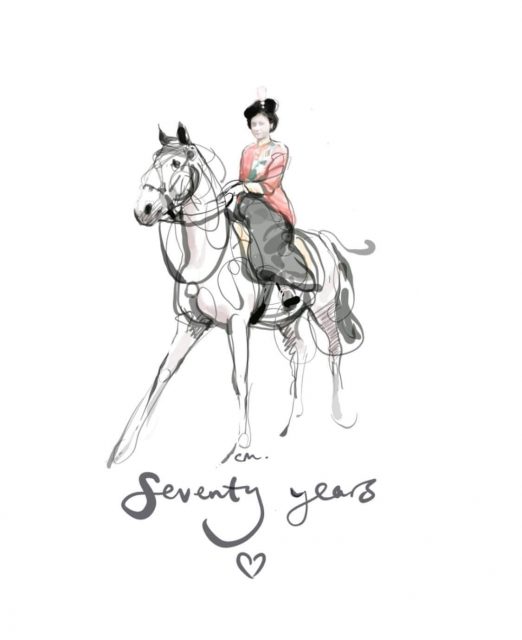 A beautiful tribute by Charlie Mackesy.

Buckingham Palace announced yesterday afternoon that Queen Elizabeth II passed away peacefully at age 96. We are deeply saddened to hear the news of Her Royal Highness—a fellow equestrian and lover of horses. Perhaps eventers have even more affection for her, as we share our enthusiasm for Three-Day Eventing with Princess Anne as well as Zara Tindall, but all of my favorite photos of her are the ones where she is simply gazing into the eyes of yet another horse with the wonderment and joy of a young girl. The horse girl fever can’t be cured, no matter how young or old, no matter what your position in life might be.

Honestly, we aren’t over Cornelia Dorr’s 5* debut at Burghley with Daytona 8 yet. Her year abroad working with Kevin McNab has certainly proved fruitful, and it’s not over yet. A five-time North American Young Rider Championship medallist, Cornelia worked for Sharon White for 6 years before going out on her own, and ultimately deciding to take her top three horses to England for the year. Daytona hasn’t been the easiest to bring along, but damn, after watching that cross country round, it has to all be worth it. [Ringside Chat with Cornelia Dorr]

After a successful week at the Land Rover Burghley Horse Trials where Tim Price finished on the podium in third place and Jonelle Price was right behind him in fourth, Team Price have a few days to re-group before heading to Pratoni del Vivaro in Italy for the 2022 World Championships. But before then, it’s time for the Kiwi camp in Wiltshire and time to ‘reload’ says Tim. Check out this video to see what he and his wife plan for the week between the two big events. [Time to Reload]

Kelly Mahloch is intensely aware of the responsibility Sundance Farm has to the eventing community in the Midwest. As one of the few recognized horse trials in a large, geographically- dispersed area, Sundance is tasked with a myriad of important roles that might be shared among several venues in more densely-populated locations. In addition to cross-country schoolings and their recognized event in the fall, Sundance also hosts the annual rally for the Regional Pony Club as well as competitions for the Area IV Young Riders. In 2020, the Area IV Championships were held at the farm and they will be again in 2024. [Catching Up With Sundance Farm]

Best of Blogs: Stranded on the Steppe

Training Tip of the Week: What Being on the Forehand Means to a Horse