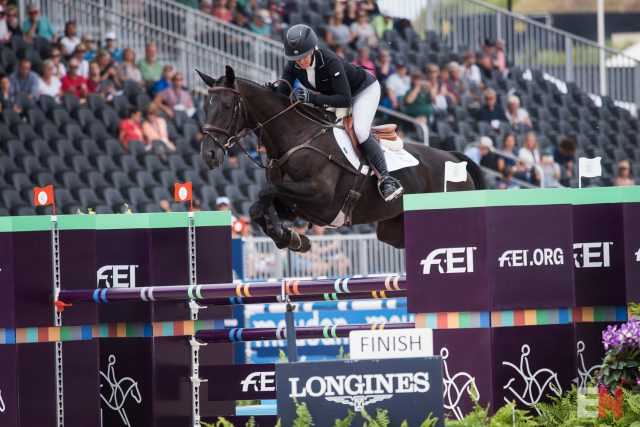 Jonelle Price and Classic Moet at the 2018 World Equestrian Games in Tryon. Photo by Leslie Threlkeld.

2018 was a bang-up year for Jonelle Price, who counted two four-star wins — Badminton with Classic Moet, and Luhmühlen with Faerie Dianimo — among a constellation of top finishes. She is the first New Zealand woman to win Badminton and one of a very select handful of Kiwis to have won more than two CCI4* titles. Fittingly, last night she was named Equestrian Sports New Zealand (ESNZ) Rider of the Year, and Classic Moet as ESNZ Horse of the Year.

Congratulations to Jonelle and “Molly,” a 16-year-old British-bred mare (Classic x Gamston Bubbles, by Bohemond) owned by the rider and Trisha Rickards. The pair has been competing together since 2013, and have since represented their country at two World Equestrian Games, in 2014 and 2018. International Women’s Day may have been last week, but here’s raising a glass to this example of world-dominating girl power!

In addition to Rider and Horse of the Year Awards, some of New Zealand’s most accomplished riders in history were honored with acceptance into the new ESNZ Hall of Fame. These included legendary eventers Sir Mark Todd, Andrew Nicholson, Blyth Tait and Vaughn Jefferis, who between them have won five World Championship gold medals, along with individual and team bronze medals, as well as three individual gold medals at Olympic Games.

ESNZ president Richard Sunderland said, “Our four inductees have achieved at the highest level and really put our country on the international map. It sets quite a standard going forwards.”

Team of the Year honors went to the show jumpers who won the CSIO5* Longines FEI Jumping Nations Cup of United Arab Emirates in Abu Dhabiwere, the first time New Zealand has ever won a Nations’ Cup in show jumping. Tiny White was presented with an honorary life membership to ESNZ for her accomplishments as a dressage rider and judge.