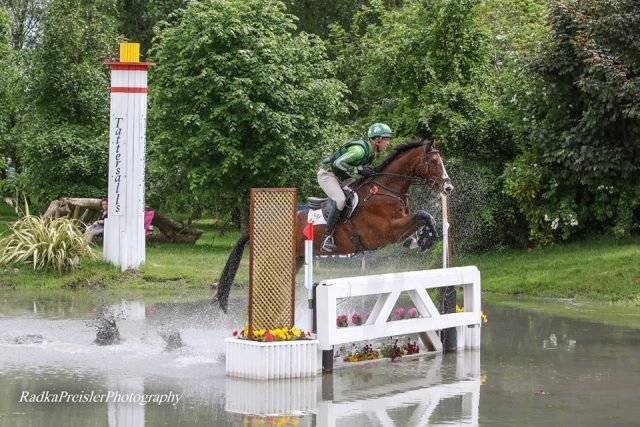 Horse and rider were having a foot perfect go up until fence 19B, an angled brush set in the final water complex on Ian Stark’s cross country course. Art caught a leg on the brush, and Jonty fell off the horse’s left side. The horse was uninjured in the fall.

Following a 25-minute hold on course, Jonty was transported via ambulance to Connolly Hospital in Blanchardstown, before later being transferred to Beaumont Hospital in Dublin.

Tattersalls confirmed this morning that “following further evaluation at Beaumont Hospital, Jonty Evans is in the Neuro Intensive Care Unit and his condition is being monitored and treated.”

Known as The People’s Horse after Jonty successfully crowdfunded £500,000 to keep the ride, Art was competing at Tattersalls in preparation for the Luhmühlen CCI4* in Germany in two weeks.

The brush at 19b caused multiple problems in the CIC3*, with William Fox-Pitt falling from Bay My Hero at the fence. Phoebe Locke and Cooley Challenger also fell at 19b. No other injuries were reported.

Please join the EN team in wishing Jonty a full and speedy recovery.

Read all of EN’s coverage from Tattersalls here.