2004 Olympic team bronze medalist Julie Richards burst back onto the upper-level eventing scene last fall with a big win at the Dutta Corp Fair Hill International CCI2* and subsequently landed a slot on the 2015 USEF High Performance National Training List. We caught up with Julie at her farm in Newnan, Georgia, to learn more about her formula for success. 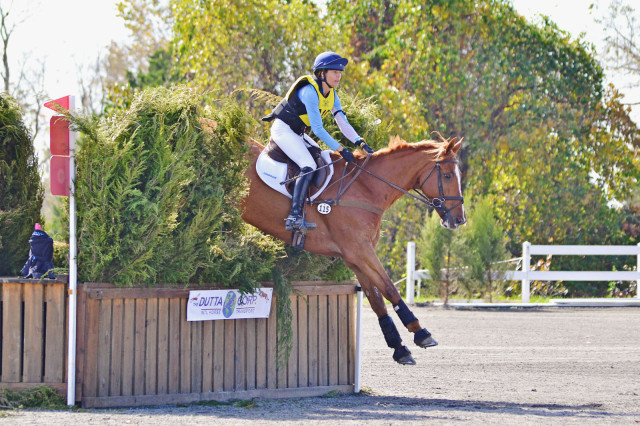 Back in the barn with Julie Richards, we got an inside look at her training, selling and teaching operation at the family farm in Newnan, Georgia. The business has been holding steady for several years, but her success on the High Performance scene is on the upswing.

It’s been a decade since she won team bronze with Jacob Two Two at the 2004 Athens Olympics, but Julie said after her win in the Dutta Corp Fair Hill International CCI2* last October that she thinks she rides better now than she did then, thanks to her business and clients.

Every day she learns along with with her students and gets to think about where the horses will go next. “My favorite days are when I’m riding and training my own horses and dreaming what they can do,” Julie said.

“I don’t know what will happen this year. It has taken me a long time to get the horses up to the Advanced level. I’ve got two now (that are getting ready) and a good string of Preliminary horses and 4-year-olds behind them.”

Urlanmore Beauty, a now 12-year-old Irish Sport Horse gelding, has not yet competed at the Advanced level, but it’s in the cards for 2015. “Samson” carried her to the win at Fair Hill, vaulting Julie back into the High Performance spotlight, proving he has all the right qualities for the next level.

“I never dreamed he would win Fair Hill. I was just giving him more experience to keep his value up, and he just stepped right up to the plate,” Julie said of the gelding, who finished on his dressage score of 43 to best a division of more than 100 horses.

Julie calls Samson (once known as Ricky) a generous horse, but he’s clearly talented also. Bred by Patrick Carey, his pedigree boasts incredible jumping lines. He is by the famed Ricardo Z and out of Cavaliers Delight (Cavalier Royale).

Samson arrived at Julie’s in the summer to remain in work while Asa focused on college, and the pair hit it off right away with an eighth-place finish at the August Chattahoochee Hills CIC2* and a fifth-place finish in the Merial Open Intermediate division at the Nutrena USEA American Eventing Championships before heading to Maryland.

The gelding will remain in Julie’s barn at least through the 2016 Olympics in Rio de Janeiro. Her plans are tentative, but she is going to start with the Jersey Fresh three-star this spring. If that goes well, she will continue on track for Rolex Kentucky in 2016. 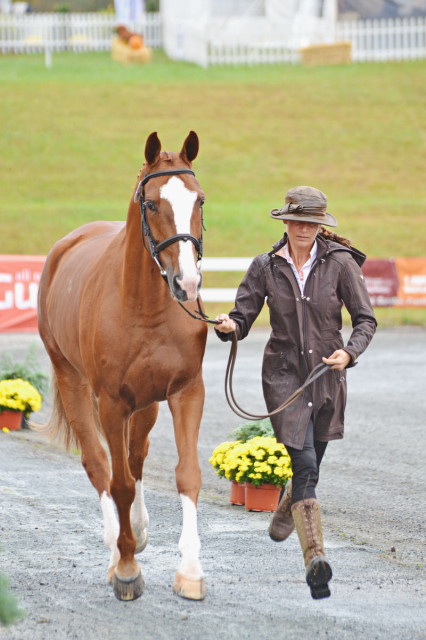 Not to be outdone by her big Irish stablemate, 11-year-old Beaulieu’s Cayenne, a Canadian Sport Horse mare owned by Sher Schwartz, finished 14th at Fair Hill with just 2 time penalties to add to her final score of 57.1.

“Cayenne is such a good show jumper, and her dressage is getting better and better,” Julie said. “If I had my choice, I’d do the Pan Ams with her.”

Cayenne (Calibur x Pinacolada, Pilot) was bred in Canada by Ferme Beaulieu Farm. Her eventing career began with Michael Pollard; Julie took on the ride in 2013. With multiple wins at Preliminary, the mare made her international debut in 2014 and jumped clear around five different FEI tracks. She also joined Samson in the AEC awards ceremony after finishing fourth at Intermediate.

Cayenne is a proven broodmare who has passed on her jumping ability to daughter CS Carerra (by Contendro, 6 this year and absolutely precious, let me tell you), also owned by Sher Schwartz. Carerra competed at the Novice level with Julie last year in a season that culminated with a fourth-place finish in the Novice Horse division at the AECs.

Now let’s meet one of Julie’s own: Fernhill Splash is a 6-year-old KWPN gelding that arrived in the States two and a half years ago. In part one of this story, Julie described Fernhill Sport Horse’s Carol Gee as one of the biggest influences on her career. Having worked closely together for several years to select and import special horses to the U.S., Carol knows just the sort of horse Julie likes.

“I had wanted something for myself that I could slowly bring along, and it was funny because she said, ‘I have the horse for you.’ I trusted her so I said, ‘Just send it.’ I’m not a big internet person, but I was up late one night looking at her webpage, and I saw this Fernhill Splash and thought, ‘Oh, can you send that one too because I like the look of that one.’ ‘That’s the one I’m sending you!’ she said.”

Splash was bred in Ireland by Stal Hendrix. His birth name is D. Boleybawn Valiant (Valiant x Arina, Crown Z). Crown Z is out of Ratina Z, who is a full sister to Samson’s grandsire. Splash was 4 when he got to Julie’s. “He was raw and green and weak, but I loved him.” What sets Splash apart, Julie said, is his trainability. “He’s the kind of horse that goes in the ring and wants to win.”

He won his first Novice horse trials and a Young Event Horse class before moving up to Training. He was the Area III Training Horse Champion in 2013 before he moved up to Preliminary.  In April, he won his first CCI* and then completed two Intermediates before the end of the year.

With her current string of consistently competitive horses and being named to the 2015 USEF National Training List, Julie has an opportunity to really get back in the game. She mentioned the possibility of Samson being ready for the Olympics, but surely the Pan American Games this July is written in permanent ink?

“I have to be selected first. It’s not that far away, but as you know with horses, month to month a lot changes.”

Not to mention, Julie pointed out, with the pressure that is on the U.S. team to win the Pan Ams to qualify for the Rio Olympics, it’s hard to tell how the team will be structured. Even though it’s technically a CCI2* event, “they may have it filled with people like Phillip (Dutton), Boyd (Martin), and proven three-star horses.” Indeed, several three- and even four-star events are listed as potential selection trials.

So Julie’s not really going out of her way to rearrange the horses’ competition schedules and goals, but that’s not to say she isn’t looking forward to participating in the High Performance training sessions with David O’Connor.

“David and I have known each other for a long time, but I haven’t ever really trained with him,” Julie said. “I’m looking forward to it, especially the flatwork because I think he understands that better than anyone — how to really get the horses to understand the exercises and the movements.”

Overall, a quest for education and enjoying the process defines Julie’s journey with horses. “It’s fun just to think about the next two- and three-stars I’ll aim for and get back out there because Fair Hill was so fun,” she said. “The horses just did not put a foot wrong, neither one of them. They just gave their all.

“I’ve been around enough to know that doesn’t always happen, so when it does, you better just keep smiling and enjoy it.”