“You don’t want to event, it is terrifying!”

That was the first real opinion I heard about eventing when I first transitioned to the world of wearing helmets and tight pants. I had just started taking lessons at a local hunter jumper barn and dove head-first into my research on English riding. I remember being intrigued by the idea of eventing: three phases, two partners, one score. It seemed like a lot of fun, but I was swayed against it early on and therefore spent many happy years in the hunter and jumper rings.

Last year, after busting my butt to improve my riding, it finally hit me: There was no way I could afford to show on the rated jumper circuit as often as I would like. Taking entire weeks off of work and traveling all over the country to show just wasn’t a financial investment I could back up. I was scheming up ways to sell a kidney on the black market when my trainer, Jen Robertson, said to me, “I think you should give eventing a go.”

Over the years, I had grown very comfortable with the safety of the ring. To be honest, the idea of cross-country terrified me to the point of no return; and I wasn’t alone in that thought. A few years back I took my loyal horse-show-husband Wayne to the event formerly known as Rolex, and I watched as a look of horror grew across his face as a horse and rider pair cleared a massive table on cross-country. 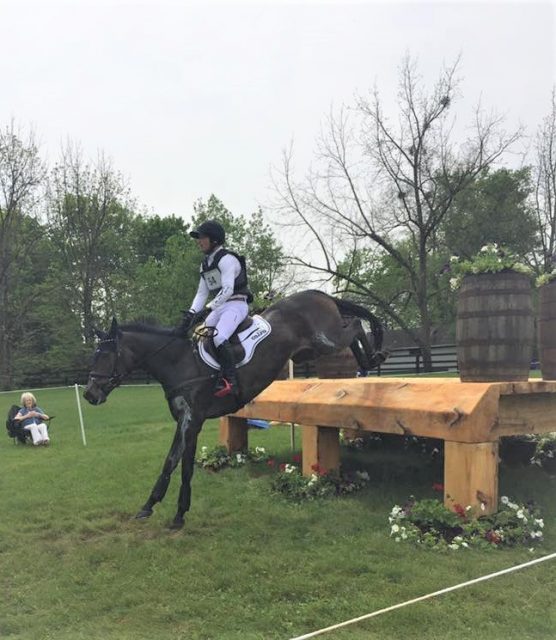 The table that terrified Wayne. Photo by Meagan DeLisle.

“So … when do you do this again?” he asked, forcing a calm disposition.

“Ohhh no. I will never do this. I will be sticking to the arena. I am not gutsy enough for this,” I replied. A sigh of relief escaped my husband’s lips, and we went on with our weekend content with the idea that I would always be a jumper.

Fast-forward to late 2018. I was burned out, and my confidence was shot. My luck with horses wasn’t quite panning out, and I didn’t even find myself WANTING to ride anymore. I was spending all of this money and feeling like my goals were unobtainable because of my tax bracket. And that is when my trainer suggested I give eventing at try.

At first, I vehemently denied the suggestion; no way could I ever navigate a cross-country course without having a heart attack. It just so happened that I was horse shopping at the time, and my trainer was subtly suggesting eventers that I could “transition” to the jumper ring if I so desired. The issue? I had a minuscule budget and big dreams, plus I needed a teacher to help me rebuild what little confidence I had left. It didn’t seem possible that I would find the horse for me. And then I got this phone call:

“Meagan, I found THE horse. How do you feel about it not having a tail?”

That was a question I had never been asked before. As a wanna-be-groom who loves studying and practicing special tricks to turn out my horse in stellar fashion, I felt a sense of sadness knowing I wouldn’t get to pick the shavings out of a long, flowing tail again. But, I also knew that Jen knew 100% what I needed and that if she swore by this horse, then he would be the one. And he just so happened to be a seasoned event horse. 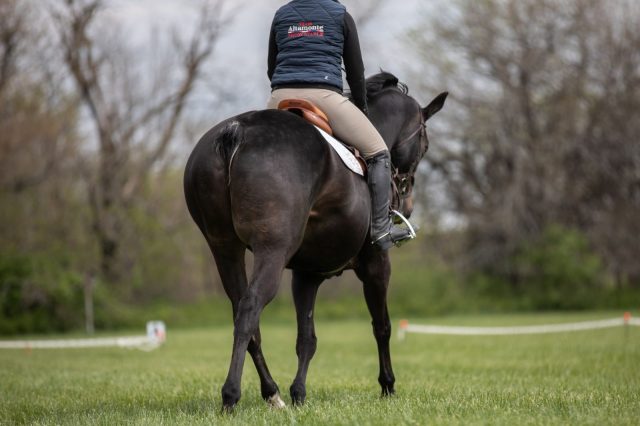 Enter Bear, a 19-year-old grade Appendix QH with a pom pom for a tail and a heart of gold. He wasn’t the fanciest, he probably wouldn’t pass the most extensive of PPE’s, but he knew his job and was eager to share his wealth of knowledge with a new rider. I knew early on that this was my horse. I also knew that if I was going to be the girl with the horse with no tail, that I was going to capitalize on it. So after Bear officially became mine, I called USEA to transfer ownership and officially changed his show name to Chasin Tail.

This sassy, yet wonderful old man immediately brought me an immense amount of confidence that I never imagined.  After a few weeks of playing around in the arena, Jen announced that we were going cross-country schooling and that I should take Bear along for the ride. I decided to give it a go and found myself *gasp* enjoying it. As we walked by the start box, Bear pricked his ears and began to power walk around the field. He was obviously in his element, and he spent the whole afternoon sailing over all of the tiny starter and beginner novice elements I steered him towards.

Next thing I knew, I was entered in my first mini-event, which, surprisingly enough, we WON on our dressage score of 33.3! From there, we entered our first recognized horse trial, Mill Creek, (which sadly became a CT after endless amounts of rain all weekend long) where we placed 6th. Following Mill Creek, we entered May Daze, held at my most favorite place in the whole world: the Kentucky Horse Park. 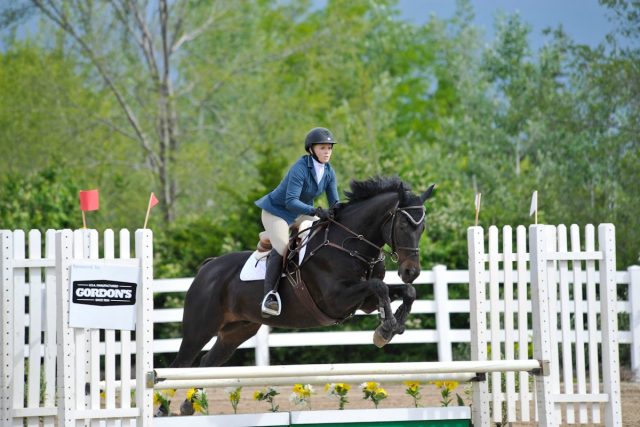 Bear being a SUPERSTAR in showjumping at Mill Creek. Photo by Merrick Studios.

So, to my husband’s dismay, I crammed my trailer full of all of my odds and ends and made the trek to Lexington with my tailless wonder in tow. We couldn’t have asked for a more beautiful weekend. The sun was shining, Bear was on his best behavior, we put in an excellent dressage test, and he packed me around in stadium despite me burying him to the deep spot twice and having two down. We weren’t at the top of the pack, but we were there. We were doing it, and I felt great.

But we still had to conquer cross-country.

My barnmates laughed at me as I gasped over the size of my beginner novice jumps. The second fence on course, a rampy set of stairs, was causing me enough anxiety that I was considering downing some of Bear’s BioSponge for my own digestive upset. We also had a good sized table and a down bank that I wasn’t sure if I was mentally prepared for, but after walking the course enough times to break my Fitbit, I felt as ready as I ever would– and so did Bear!

While I don’t recall most of cross-country (let’s face it, it was all a blur due to absolute bliss), I do know that after every.single.fence. I yelled out, “Good boy Beary!” He booked it around that course with a sense of determination like no other. Not once did he hesitate or look around. He had his game face on, and he took the best care of me that he could have.

As I crossed the finish flags (4.8 seconds before the time might I add, we were literally FLYING around the course… oops), I couldn’t help but feel the tears of joy well up in my eyes. Surprisingly enough, we wound up in the ribbons placing 9th out of a very big and very competitive division. And then it hit me: for the first time in a long time, I had fun while riding.

I can’t tell you how much that feeling is worth.

I recently posted a status on my Facebook, which has taken on a life of its own, regarding buying the right horse for you at this point in your riding career. More often than not, we are so focused on buying the “fancy” horse, that we overlook the right horse. To some, Bear may not seem like the fanciest of options, but to me, he is everything I could have ever wanted or needed. He teaches me, he takes care of me, and he keeps me smiling. When I screw up, he cleans up my messes. When I get nervous, he calms me down by doing his job. Tail or no tail, Bear was the horse I needed at this point in my life.

Bear has not only brought me so much happiness and confidence, but he has opened up my eyes to a whole new world: eventing. And with a show schedule crammed full of events all year long, we have our sights set on a new goal: the AECs. It may not happen in 2019, but I am bound and determined to see that goal through in 2020.

And with Bear on my side, anything is possible.

So buy the horse with no tail, ladies, and gents, and give eventing a go. You won’t find a happier, nicer group of folks to compete alongside in any other division.