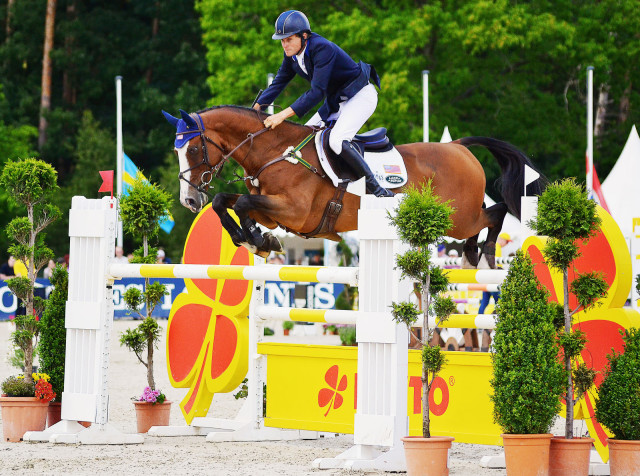 After sending Otis Barbotiere to Florida earlier this year to be tried as a jumper mount, Boyd Martin confirmed that Ali Boone, a young jumper rider from Kentucky, has acquired the ride on his London Olympic mount. The news comes several months after Trading Aces, another of Boyd’s four-star mounts, was sold as an equitation horse to young rider Alexandra Pielet.

Otis, a 13-year-old Selle Francais gelding owned by the Otis Barbotiere Syndicate, most recently competed with Boyd at Luhmühlen CCI4* last year, where they finished 15th. After that competition, Boyd and his syndicate members made the decision to seek a new home for Otis, as they felt that upper level eventing was not ideal for his longterm soundness.

“He still loves competing, and he’s a high energy horse that likes to be in on the action,” Boyd said. “We made plans to redirect his career. We originally paired him with Lauren Hough down in Florida, who would take him and show him in some jumper classes.”

Lauren then searched for a rider she thought would be a good match for Otis in a jumper career. “Lauren wouldn’t let him go to just anyone,” Boyd said. “She did a wonderful job and found him an excellent rider in Ali Boone, who takes excellent care of her horses.”

With Otis’ longterm soundness in mind, Boyd and Lauren wanted to find a rider who competes on a lighter schedule. “We didn’t want someone who would use him up too much — Ali shows him maybe twice a month. She wintered in Palm Beach and will spend some time in Kentucky before heading up to Calgary to compete at Spruce Meadows,” Boyd said.

Otis, who is by Quidam de Revel out of Java Barbotiere, by Veneur de Baugy, is well bred to be a pure show jumper, and he began his competition career as a jumper in France before coming over to the U.S. to event with Boyd.

Boyd said he is happy to see his horses move on to homes where they can thrive. He’s grateful to the Otis Barbotiere Syndicate members who have provided their support, and he hopes that eventually his next “needle in a haystack horse” will come along as his next eventing superstar.

“Now that two of my big syndicated horses have gone on to other careers, I’m not necessarily actively looking, but special horses come along once in a blue moon. I am hopeful that when the next special horse comes around, the syndicate members will be ready to have another go,” Boyd said.

“Otis really completed a dream of mine to compete at the Olympics. It’s something I’ll always be indebted to him for. I can proudly call myself an Olympian, and I will never forget riding around Greenwich Park — a very testing course — and he showed wonderful grit and determination. He tries so hard, and it’s my duty to make sure he’s looked after for the rest of his life.”

We wish Otis the best of luck with his new rider, and we’ll be looking for updates from Spruce Meadows soon!