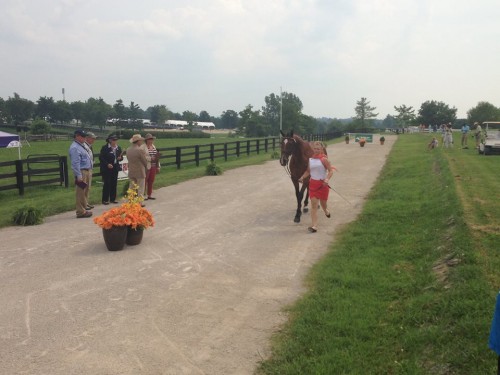 Amy Gilbertson & One Honest Man jog for the CCI* yesterday

Good morning Eventing Nation, and welcome to the first day of Eventing competition at the NAJYRC in Kentucky! All the best junior and young riders from around the country have gathered at the Kentucky Horse Park this week to participate in the killer competition that builds memories for years and brings awards and opportunities that cannot be replaced with any other competition. Most upper level riders will tell you, they look back on their “young rider days” with nothing less than the best of memories.

Today, the CCI* does dressage, starting at 7:30 am in the Stonlea Ring. Tomorrow, the CCI2* does dressage, but they get the honor of competing in the Rolex ring! During my competition at Young Riders, they were testing out the new flood lights for the WEG (I competed in the CCI2* in 2009) and I had to compete at 11:30 at night in the dark, with many scary shadows. Which my horse totally appreciated…..however this year’s batch gets good old full sunlight, and I wish them nothing but the best! Good luck to all competitors!

Links from Around the Globe:

Rick Wallace’s famous stickability video has reached over 219,000 views on Youtube, and the rest of the world has taken notice.  Rick was interviewed by CNN’s Jeanne Moos and featured on the network’s show The Situation Room with Wolf Blitzer on Wednesday night.  The interview is a lighthearted overview of the near save and the video going viral.  You can view the CNN interview here, although I am not sure the video will play in all browsers.  Rick, a recent finalist in our EN blogger contest and now a guest EN writer, shared his thoughts on the entire experience in a blog for EN on Friday, which you can read here. [CNN] [Update: Here’s a better link for the CNN interview, and the video was just reportedly shown on Fox News, although we don’t have confirmation of  that or a replay]

Sinead Halpin, recovering from her multiple wounds from a fall at Chatt Hills last weekend, has announced that Tate will not be competing at Blenheim this fall, but instead re-routing to Fair Hill. While Sinead feels that she will be physically healed by the time Blenheim rolls around, it wouldn’t really be fair to Tate to take him without as much preparation as he should have. Therefore, the dynamic duo have decided to go to Fair Hill instead to get their qualification for the WEG, and give Tate another month of work. [Welcome to the ICU: Where Character is Built]

Finally, Laura Collett is allowed to leave the hospital. After suffering a nasty rotational fall last week and receiving several crush wounds, Laura was placed in a medical coma for several days in order to let her body heal. She has since recovered and is now allowed to leave the hospital, although I’m sure she is under strict orders not to hop right back on a horse! [Laura Collett on the mend]

If you’re headed to Cobblestone Farms HT this weekend, you better bring your pink…everything! In addition to a great Area VIII event, Cobblestone hosts a Young Event Horse Competition, a rocking competitor party and “pink out” on XC and “Jump for the Cure” in SJ to promote awareness of and raise funds for breast cancer. Check out our report from last year, and you’ll see what I mean about the pink. [Cobblestone Farms 2012: Attack of Pink]

The New York Thoroughbred Horsemen’s Association (NYTHA) is partnering with Genesee Valley HT in August to sponsor awards and prize money for retired Thoroughbred racehorses competing at the event. Prize money for the first event was $100 to the leading Thoroughbred in the Intro Division, with $200 each for leaders in the BN through Prelim divisions. The prize money is being doubled for the Fall Horse Trials! In addition, the leading junior competing on a second-career Thoroughbred in each division at the GVRDC Fall Horse Trials will be awarded $100. At year’s end, the top retired Thoroughbred racehorse in each division will be awarded a cooler, and the overall top-ranking junior will receive an additional $250. Prize money and awards for the Genesee Valley Second Career Thoroughbred Series will total approximately $4,000. [Enter Genesee Valley August HT]

I don’t even know how to tee this one up, other than to tell you it’s one of my favorite internet finds thus far. It is titled: “The Ultimate Horse Onesie”. Need I say more? I will send an actual chinchilla to the person who buys one and ships it to VA for me. Size large. [Ultimate Horse Onesie]