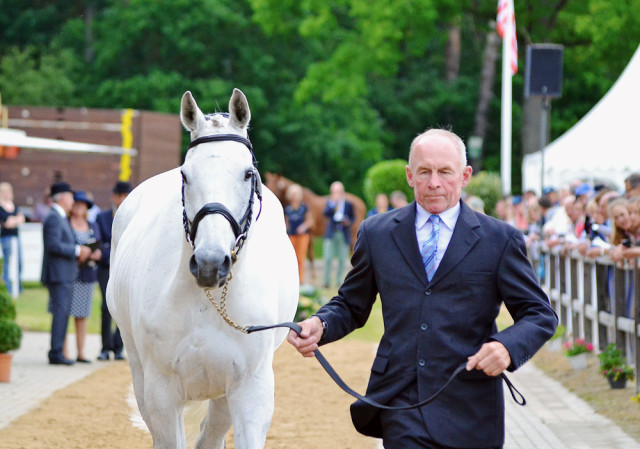 New Zealand eventer Craig Nicolai is fighting for the return of Just Ironic, also known as Spida, after he was seized by the UK debt collection agency DCB Limited, according to the NZ Eventing Facebook page.

“Craig and his supporters are desperately trying to get the 17-year-old horse back including on the basis he is owned by Craig’s mother Ann who lives back here in New Zealand,” Eventing NZ wrote in a post yesterday. “He is listed in the FEI database as being owned by Craig, Anne and Hedde Nicolai …We hope this situation is sorted out quickly; we know there is a special lifelong bond between the Nicolai family and Spida.”

The horse was reportedly seized at Hartpury Horse Trials earlier this month, where Spida and Craig were entered in the CCI3* in preparation for Burghley. Their Burghley entry has been withdrawn, and the horse is now listed for sale on Horse and Hound.

The seizing of the horse appears to be the result of a situation unrelated to this specific animal entirely. Craig took to Facebook to explain the situation, and according to his detailed explanation, the owner of a horse called Canyon von Erpekom that was in training with Craig owed a sum of money for board, shoeing, feed, entries and transport. When the owner came to pick the horse up, Craig said he would hold the horse’s passport until the account was settled.

“He didn’t pay and so court action was instigated against him. Rather than settle his account as promised [Thomas] Jenkins filed an opportunistic/deluded counterclaim of many, many thousands of pounds for loss of stud fees and broodmare livery fees purely due to the fact that he didn’t have the horse’s passport,” Craig wrote.

Craig moved to have the case dismissed, but due to an apparent clerical error, there was a hearing held in his absence and the case found in Jenkins’ favor by default. Subsequent appeals were unsuccessful.

“I do not usually air my ‘dirty washing’ through the social media but seeing as the English Justice System has failed me so abysmally I can only hope that the Facebook and Twitter Justice Systems may be more effective!” Craig wrote. “I am so very grateful for all of the support that I am receiving but feel that the credibility of both my mother and I has been unfairly jeopardised by this horrendous situation and a special horse to our family is suffering the consequences.”

According to Craig’s website, Craig’s mother bought the NZ Thoroughbred/Cleveland Bay as a 2-year-old, and Spida and Craig, who is based in the UK, have had a long career together. They competed in their first FEI event as a pair in 2006 and have been competing at the three-star level since 2007. They have made multiple appearances at Burghley and other European four-stars including Pau, Luhmühlen and Badminton.

We hope this situation is resolved soon and will bring you more updates as they become available.