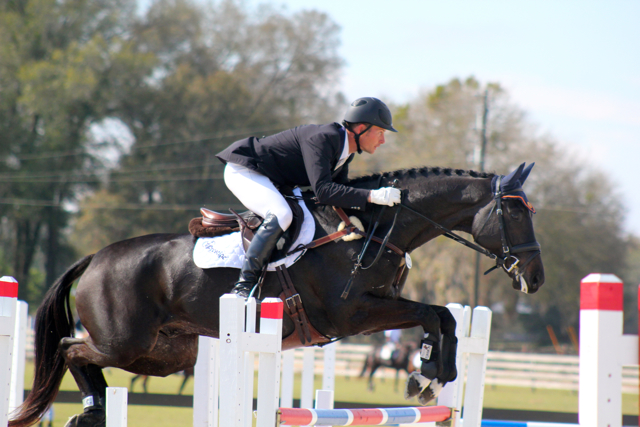 Jon Holling said all he needed heading into show jumping at Chatt Hills this morning was to read Maggie’s By the Numbers predictions once more. While he was only kidding, we’re still thrilled to see that he and his veteran partner, Downtown Harrison, launched a successful comeback at the level, jumping double clear over Marc Donovan’s course to clinch the Advanced win on a final score of 38.8.

This has been a weekend of sentiment for Jon and the family that has grown to know Downtown Harrison, an 11-year-old Trakehner gelding, as a member of the family. After the horse sustained an injury in 2013, Jon attempted to bring him back to the top level in 2014 but elected to continue rehabbing him after he felt “not quite right” at Carolina International last year.

“We followed our vet’s advice and brought him back last year, but he wasn’t 100% after he ran Carolina and we felt he needed more time,” Jon said. “The plan originally was to give him to Jen to ride, I figured that would be it for him at the top level.”

Jen Holling rode Downtown Harrison throughout his rehab in 2014 and told Jon that he needed to sit on the horse again, that he felt fantastic. “Our vet, Lisa Casinella, told me the same thing,” Jon said. “That there was no reason I shouldn’t be riding this horse and that he felt better than ever. I love riding him, so I figured I’d give it a shot with the intention being — and it still is — to have fun and take it one event at a time.”

Jon picked up two Prelim wins with Downtown Harrison this year and circled Chatt Hills as the horse’s return to Advanced competition. “The flatwork I’ve had a lot of time to work on, and I knew he’d be competitive,” Jon said. “On cross country, I didn’t go out to be fast but I do think you have to be a little careful with a good horse like him. If I go out and try to go too slow, I find he doesn’t jump as well. I knew that I could go quick and have a chance to win, and we still picked up 13 time.”

“I was quite nervous yesterday morning — you always think they’ll remember what to do out there, but you never really know until you try. More important to me (than the time) was that there were some very good questions out there and he was good and knew his job.”

This morning, Jon and Downtown Harrison went in and clinched their win over second placed Daisy Trayford and Normandy Soldier and he’s elated to have his partner back in action. “This one is pretty special,” he said. “I’d tentatively like to take him to AECs and then aim for a three-star after that. You just have to be careful because while you have to make plans, I want to make sure I do right by the horse. He really is a part of the family now and I want to make sure we make the right decisions for him.”

Marc Donovan’s course this morning was tricky and claimed rails or time from every other pair in the Advanced division. Kyle Carter and Cooley Nothing Better B moved from fourth to finish in third place, followed by Libby Head and Sir Rockstar, Emily Renfoe and Walk the Line, and Kyle Carter and FR’s Trust Fund.