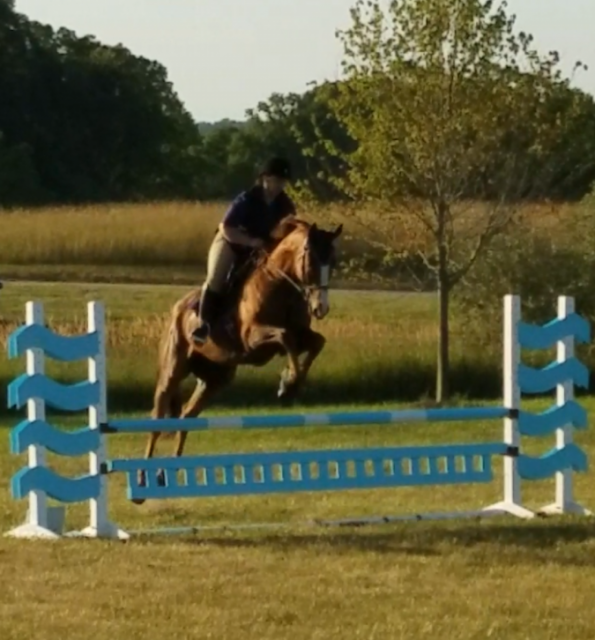 I sometimes dream of having a billion dollars, a huge farm, my own personal blacksmith, a team of grooms to bubble wrap my horse and a trainer on site. Even then, I don’t think it would be enough to manage the damn redheaded Storm Cat that I acquired five years ago.

We have entered eight events, competed in ONE and schooled our socks off. This last weekend was supposed to be another debut of ours. We entered in the Novice division at a big event in our area. Of his eight events, the first one was when he was VERY green, fresh off the track and he had a full-fledged meltdown at the water.

The next seven events were scratched because of bone bruises from playing too hard in the pasture and hitting himself, a couple abscesses (long history after pulling him from a bad home) and Potomac horse fever. He can’t possibly go lame again after I send in an entry…

Like clockwork, he ripped three of his four shoes off while I was working…after closing…after I could get some money back. He ran a clip in two of the feet, ripped the hoof wall off of one, bruised his sole to heck and abscessed from compensating for his bruised sole. 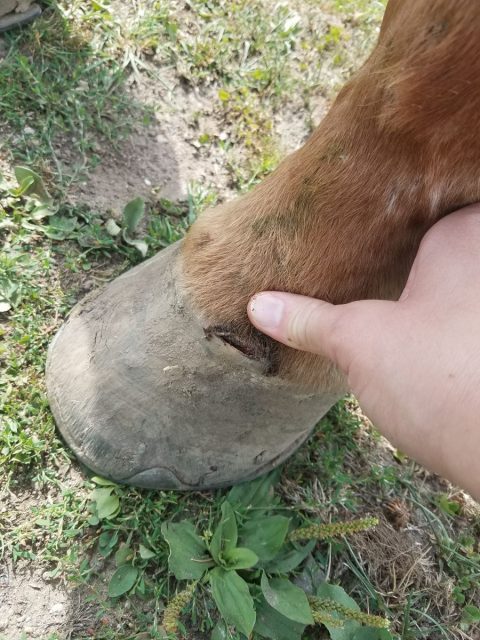 This abscess occurred during the most recent lameness episode. Photo courtesy of Maria Perkins.

My absolutely amazing blacksmith came out within a few days and nailed his shoes back on. He didn’t have much to nail to and we knew they could be close… a risk we had to take since he CANNOT go barefoot. Yep. A week later, he decided that nail was too close. See: me in the field trying to rip his shoe off, drenched in sweat, and him crumbling every time I put the shoe rippers near the bruise. Now, three weeks later, he is starting to sound up but will likely be out of jumping order for another week or two.

This last endeavor of lameness felt a bit more significant than that previous times. He was so lame that he wasn’t bearing weight on his foot, which he hadn’t done since I had gotten him five years prior, in the days where he blew 40 abscesses per year.

I had invested a lot into our adventures together this year. I got serious. I bought a new truck and trailer. I started working with a trainer. I bought an airvest. I invested myself in this financially and emotionally. “Hey Maria, why aren’t you riding? I see you are on the schedule?” I hadn’t been sleeping and was feeling deflated by watching all the riders go cross country on the perfect course for the chestnut A-hole and I. I was heartbroken. By the 10th explanation, good friends and strangers saying, “just sell him andbuy something else,” I was emotionally (and financially) spent. 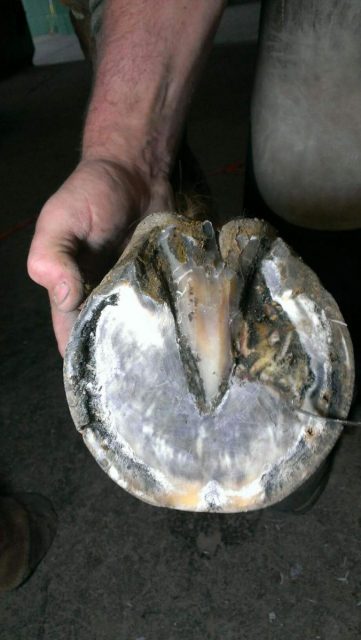 This is one of the first big abscesses he had when I got him. It blew out in front of and behind the bars many times before it really opened up. Photo courtesy of Maria Perkins.

First off, I actually like this horse because he challenges me so much. I have to ride 100% of the time and when I master riding this horse, I’ll be able to ride anything else. I have ridden hundreds of other horses and nothing compares to this horse in talent, athleticism, and that ‘feel’. Sure, I get off of him in tears occasionally. Sure, he breaks a LOT of stuff. Sure, he makes a fool of me regularly. Sure, he takes ALL of my money. My riding wouldn’t be improving without him though. I wouldn’t have even known that I needed to improve so much.

When I’m not feeling confident, trainers tell me, “What are you worried about? He can jump literally anything out here (referring to the farm’s cross country course through that goes through Prelim).” I could have an upper level horse, if I got myself together (and of course, he stopped having freak things happen during show season).

Secondly, who would want this horse? Genetically crappy feet, terrible manners, a little too big for his britches, and accident prone…sounds like the dream, especially if you don’t ever want to compete and want to just throw money away. How would I ever sell him? I could give him away but I couldn’t guarantee that he would stay safe since troubled horses seem to land in troubled places. If he had a show record I might be able to at least make a pitch to someone who could handle him… but again, he doesn’t believe in competing.

Thirdly, my money tree had an early fall. All the leaves have already fallen. It costs money to buy anything else and who has that after investing in competing with another horse. I have a limit on how many horses I can have, so unless I sell him I cannot purchase anything else. I really have no interest in starting something from scratch either, which is all I could afford. 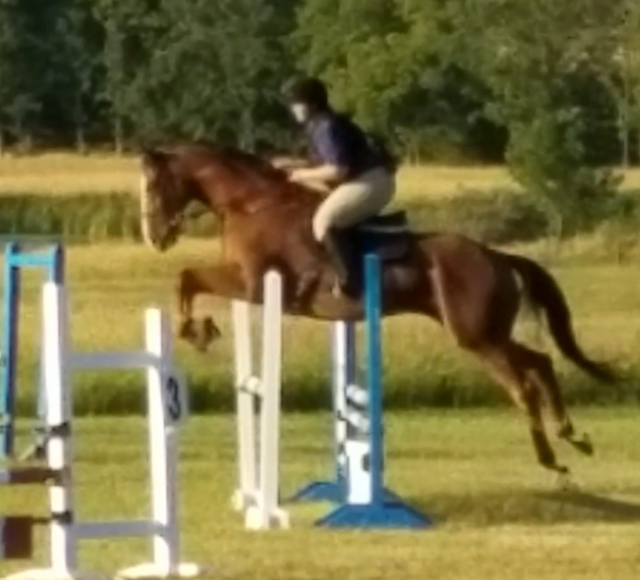 Fourth, I feel this horse deserves a soft, permanent landing, even if it is at my expense. He LOVES his job. If he could jump every day, all day, he would. He started as a $950,000 baby and went on to race for six years. When he retired, he was adopted out into an approved home that could not handle him and had a significant lack of experience. He went from a very nice horse with a lot of potential, to a mean, guarding horse that became dangerous because he hurt so bad.

I was recruited to pick up from the bad home and ended up rehabbing him…. Which led to me acquiring him. He blew 40 abscesses per year for the first two years, with gluing shoes and working with the vet and a fantastic blacksmith. He would spin, buck, and go backwards more than forwards. It took a solid year to work IN an arena and another year to canter in one. He has been tough and slow to trust but now he trusts me. He does literally anything that I ask of him and wants to work for me.

I feel like I owe him a good life and that he doesn’t deserve to have the dice rolled on him. His injuries now are more due to the fact that he feels TOO good and plays too hard. Fluke accidents. In the end, I’d rather deal with that. He may be a jerk but he’s come a LONG way, and now he’s my jerk. Staying with me is the only way I can guarantee that he stays feeling this good.

He won’t be the last horse I ever have so while he is here, I will make his time good. I will attempt to do right by him and he is returning the favor by allowing me to grow and be challenged. Of course, some days I’d like him to turn the challenge down just a little bit. But, you can’t make progress while going backwards so it appears that the two of us are going in the right direction. One day, that progress will lead us to finishing an event.