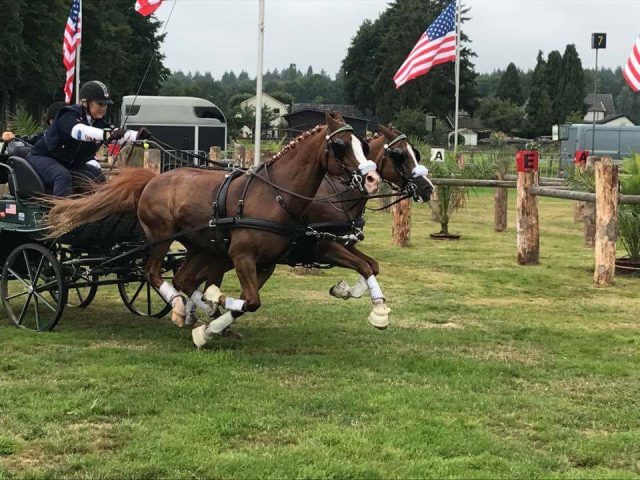 Katie Whaley with her Tommy and Tanner leaving the seventh obstacle at Beekbergen CAI3*. Photo by Madison Saylor.

While the American eventing community was focused on Millbrook this past weekend, combined drivers were looking across the pond to the Netherlands. The Beekbergen CAI3* hosted a strong contingent of U.S. drivers. This is a gorgeous venue located a little over 60 miles from Amsterdam, free to the public with top notch viewing.

In the Four-in-hand division, powerhouse Boyd Excell (AUS) drove the American team owned by Misdee Wrigley Miller to victory, with Chester Weber (USA) taking second. Boyd has the box seat while Misdee recovers from an injury, and one really has to ask what is it about Aussies named Boyd?!

Pony Team USA members Tracy Morgan and Katie Whaley took advantage of the opportunity to compete in a special VIP division as a final outing before the Pony World Championships in Minden, Germany in two weeks. Both competitors posted double clear rounds in cones to end on a high note.

The third US driver, Miranda “Randy” Cadwell, arrived on the continent earlier this week … followed several days later by her luggage! Pony Team USA will spend the next week prepping at the Riant Equestrian Center in Beekbergen before moving to Minden next Monday, Aug. 14.

For complete driving coverage, go to www.hoefnet.nl. The English version available by clicking on the British flag in the upper right hand corner.

Red on the right, white on the left and a different kind of insanity in the middle! Go combined driving!