Kate Samuels is becoming a regular contributor to Eventing Nation and we couldn’t be more grateful.  Kate observed the USEF training sessions last week and also helped host the USET Olympic Gala in Aiken on Friday.  Kate was kind enough to send us a report from both events as the path to the Olympics starts to heat up.  Kate is a fellow Charlottesville, VA based eventer and rides
the fantastic horse Nyls du Terroir.  Thanks for writing this
Kate and thank you for reading.
—

Of the few jump lessons that I got to watch this time around, Lauren
did a really good job in taking the next step with a lot of riders who
had been here two weeks ago. Most of the students were returning for
their second (or in Boyd and Phillip’s case, 30th) lesson with her,
and she obviously made an effort to take the learning to the next
level. The horses and riders worked on two verticals in a very short
bending line, with one oxer on the end off another bending line. The
idea was to be able to change the amount of strides while maintaining
the rhythm of the canter, an exercise that we have all been asked, but
with the short turns before and after landing, it became much harder
than it looked. She was very particular about the horses bending
through their bodies in this exercise, and not just turning with a
straight, stiff horse. Lauren also had the riders practicing rollback
turns about three strides off the rail to a jump. This is something
that we Eventers like to think of as strictly a Jumper experience, but
it is really starting to show up in our courses, and you could see
that a lot of people were uncomfortable believing in a distance and
relaxing, instead of shoving their horses up to the base. I heard her
tell a few riders to “believe in the distance you see first, don’t
panic at the base”, which is something I am familiar with! All of the
riders that I spoke with felt that Lauren was very invested in the
team, and that she makes a great addition to the family.

Mark took over for the Thursday and Friday training sessions, helping
the riders on the flat. Not that he was ever easy to understand as an
auditor, but I have to say the introduction of the microphones and earpieces makes
eavesdropping on the Captain almost impossible! From what I could
gather, he worked on precision, balance, and responsiveness with all
the horses. For instance, if you are extending across the diagonal,
the first step you take off the rail should be bigger than the last.
Start your movements precisely at the first moment you can. This, of
course, relates to how responsive your horse is off your leg. There
are some horses that you can push and attain immediate results, and
some that you have to ask and then wait. Should you have a horse that
has a bit of a delay, know that, and prepare early. He worked on the
riders using their corners effectively to help set up for lateral
movements or extensions right out of the turn. Although none of these
things seem like rocket science, it is almost comforting to know that
the best of the best are still hearing the same things that we all
hear in our lessons. Effectively riding a dressage test for all the
possible points is a lifelong pursuit. 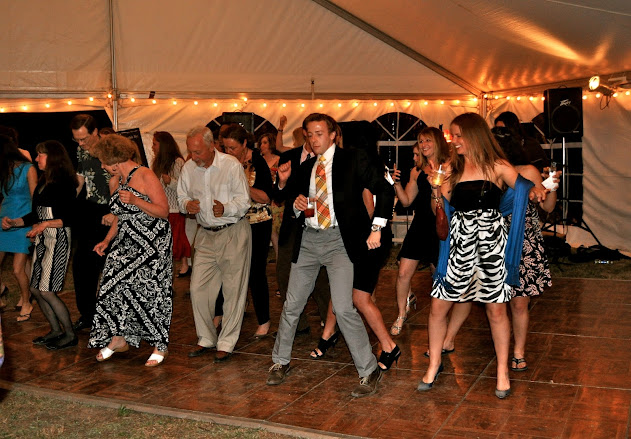 As for the Gala….I think it was very successful, they seemed to
raise a lot of money. There was a silent auction including two bridles
from Bit of Britain, blankets from Dover, very fancy Coach bags
donated by Kristin Michaloski, some Tiffany pearls, a cross country
saddle from Wise Equestrian, a year of SmartPaks, and various training
sessions donated by the professionals. The gala was hosted by Joan and
Carl Hampf, whose daughter Jessica rides for Canada. The live auction
was run by a very shy young man by the name of Boyd Martin. They sold
a lovely timeshare for just under $5,000 and two tickets to Eventing
at the London Olympics were very hotly bid upon, finally selling for
$8,000! There was a lovely band who stayed until midnight, encouraging
all sorts of ridiculous behavior. The event was catered by The
Willcox, and the food was absolutely amazing. The only strange thing
was that although you could get a hand-cut gigantic slice of ham or
some prime roast, there were no knives! There was a fair amount of
caveman eating, and meat tearing with fingers. To see some of your
fellow riders wearing dresses, heels and suits was amazing, to see
them simultaneously gnawing on a giant slab of meat was priceless.