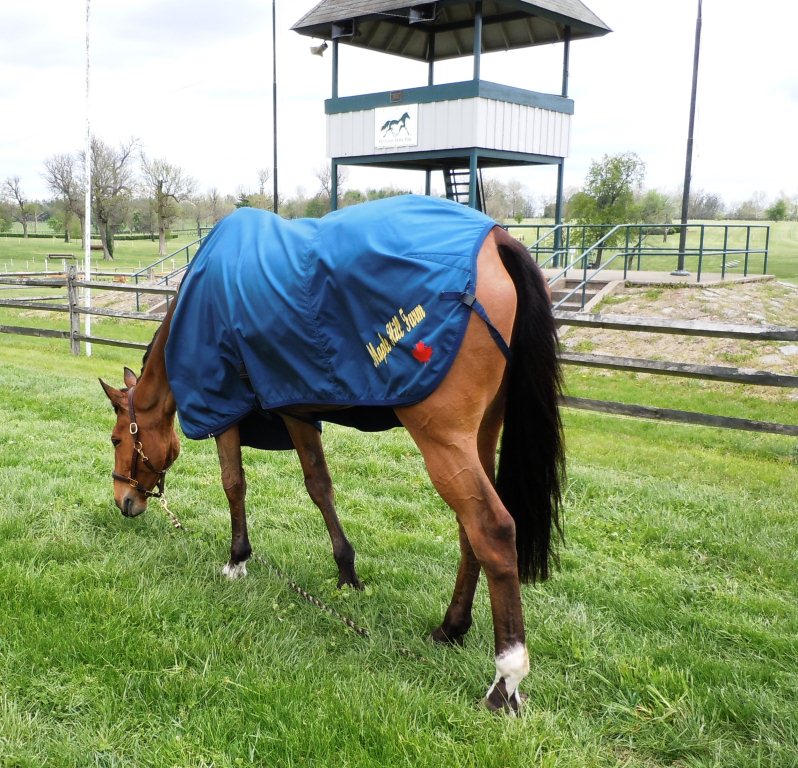 Normal people get excited about normal celebrities–the sort that grace the cover of Us Weekly. But horse-people… our crushes are a little “different.”

There is something to be said about not paying attention to
where you are walking.

I ambled a little close to the competitor’s barns at Rolex
last spring.  Thankfully, I wasn’t busted
Hamish-and-Dave style.  Instead, I happened
upon a groom hand-grazing two horses in a grassy lane.  Feeling the urge to preserve the moment, I
asked to photograph them.  She got a call
just as I snapped the photo, so I waved and left as she began talking into her
cell phone.

In seconds, I heard someone calling out to me.  It was the same groom, and she motioned me
back, saying that she had to run back up to the barns immediately, and could I
please hold her horses for her?  Inside
my head I squealed “HELL YES!” but outside I replied with a nonchalant
“Okay.”  She told me the horses’ barn
names, handed the leads to me, and ran off.

And so I found myself on a little island of Kentucky Horse
Park paradise, hand-grazing Pacific and his stable mate Eddie.  I was so excited to be hand-grazing these
horses that I whipped out the camera again and this time I videoed them and, in
a fabulous display of utter dorkiness, narrated who they were and why I was
with them.  Too soon, she returned, but it
was then I learned that she was Peter Barry’s groom and that Eddie was his
competition horse Kilrodan Abbott.  She
told me their number and to be sure to watch them on cross country because
Eddie was really good at going XC.  I
think I probably skipped when I left them, as I had already formed a profound
crush on Eddie. 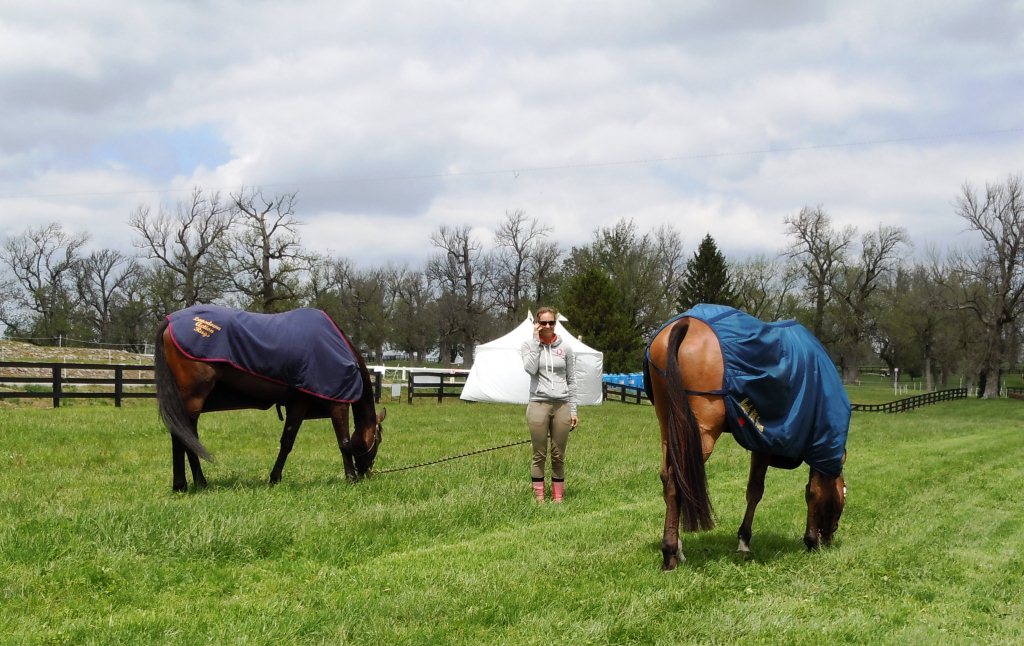 Cross country day dawned with me at the back of the course
as is my usual viewing strategy.  I
struck up a conversation with one of the galloping lane volunteers and in the
course of our talk she revealed that the organizers hadn’t had time to get the
order of go to them and she had no idea what horses were zipping past her.  Of course I immediately gave her my “go”
list, but this left me unprepared for Eddie’s big run.  My plan was to meet up with him in the middle
of the course and follow him through there, then run back in time to see him
finish.

I gasped when I heard Nigel calling out Peter and Eddie’s
progress.  I was still chattering away at
the back by the sheep shelter and I started running towards the opposite end of
the course. I managed to catch a glimpse of Peter and Eddie pounding past on
the way to the sunken road.  I listened
to Nigel as I heaved my way up the hill and over the front half of the course,
peeling off sweaty layers as I ran.  By
the time I made it to the finish, Eddie was just inside the vet box, with me on
the wrong side of the track.  I had blown
my big chance to see him finish.  Whereas
yesterday was all about being in the right place at the right time, today was
the polar opposite.  It took another
eternity to jog back past two jumps and cross the galloping lane to get
anywhere near the horses.

At the vet box, standing in a bucket of ice water that
lapped at his elbows, his lead rope slack, stood Eddie, calmly and coolly
observing the scene around him and thereby securing my deep and abiding stalker
love.  Nearby was Peter and his team, and
all I could do was sputter “Eddie!  I’m
so proud of you!”  Everyone was very nice
to the crazy breathless sweaty woman gushing at their horse, but still, they
all gently turned their backs and began ever-so-quietly inching away.  I stayed by the vet box for the rest of the
day, not wanting to forget a single moment. 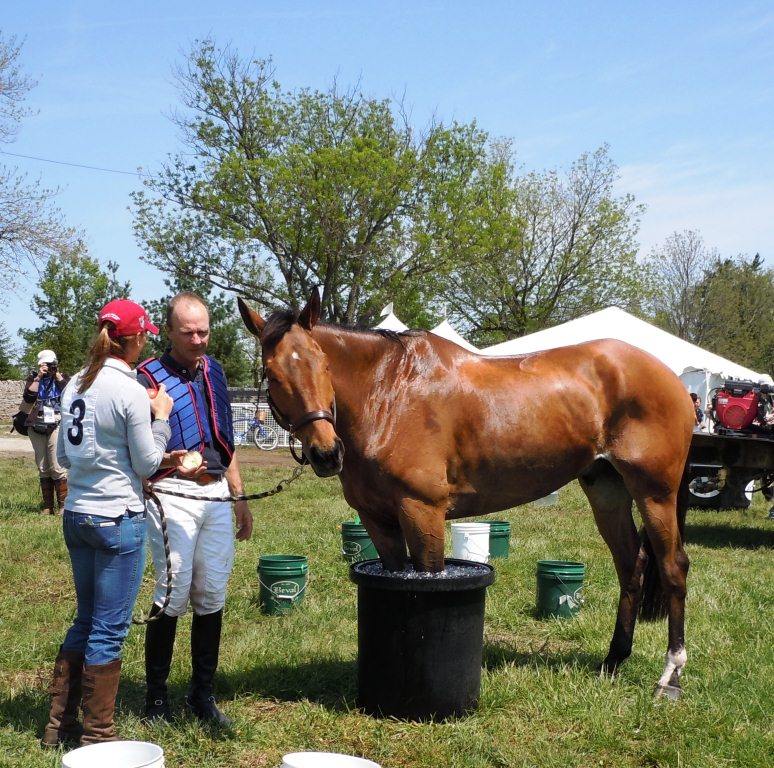 I was so excited about stadium that next morning
that I
handled it like anybody else would by hitting the Bit of Britain tent
and buying
a new pair of boots.  I sauntered to the
warm-up arena with my new boot box pounding my right calf at my every
step, flapping
and urging me forward.  I watched Peter
and Eddie pop over a few jumps and then made my way into the
grandstand.  I was NOT going to miss them this time.  I didn’t think I
could sit still so I didn’t
bother going up to my seat and tucked myself into an alcove near a
seating
entry.  When Eddie cleared that last jump
my arms and my new boot box went skyrocketing.
I quietly exited when the security dudes shot a few concerned looks in
my direction.

If ever there were a pair that deserves a devoted group of stalkers
it is Peter Barry and the pride of Canada, Kilrodan Abbott.  Peter is an amateur eventer and Rolex was his
and Eddie’s first four star.  Can you
imagine being an amateur at the four star level?  (Yeah, I know… I dream about winning Rolex every
single night, too.)   The beauty about Rolex
is that it gives amateur horse and rider teams the opportunity to express their
athleticism, to show the world that it is possible to balance a talent at
equestrian sport with a life that is (somewhat) normal.  It gives every ammie in the world hope, and
it gives the rest of us a reason to beam with pride at their accomplishment, to
share in an incredibly wonderful moment.

Oh, and Eddie… I still love you. 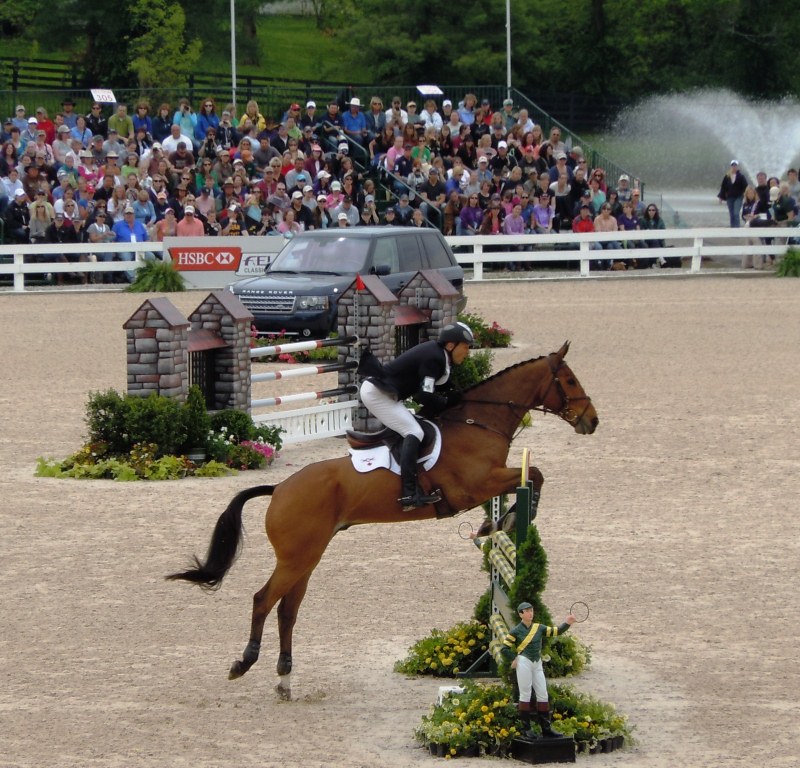