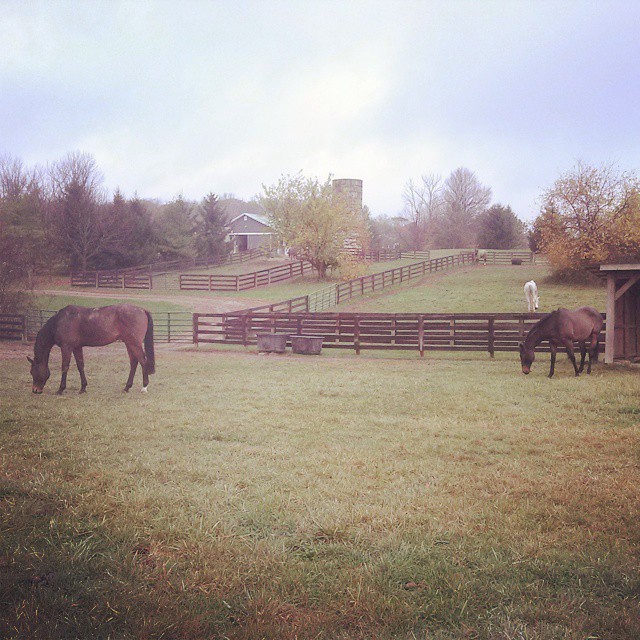 Roman Place and Oz the Tin Man settled in at Redtail Ridge Farm. Photo via Katy Groesbeck on Facebook.

Katy Groesbeck packed up her life and her most prized possession in Laine Ashker’s trailer last year after completing the Nutrena American Eventing Championships, bidding farewell to her California life to start a new chapter with Buck Davidson.

A year and many professional milestones later, Katy is ready to move on to the next chapter, settling in at Redtail Ridge Farm in Johnstown, Oh. to branch out on her own. “The plan was always to work with Buck for a year,” Katy said. “It’s been a little over a year now, and I feel ready to take on the next step as I work towards becoming an international rider.”

The idea of Ohio first came about when Katy’s boyfriend, Brett, took a job in Columbus. Since Katy’s time with Buck was winding down, she began to look at the possibility of moving her up and coming business to Ohio.

“It came up when Brett visited me at Caroline Martin’s farm, the time time when Conor Rollins was there,” Katy recalled. “Brett and Conor got to talking about how they were both from Ohio, and when the idea came up of me moving there, Brett suggested I talk with Conor about finding a barn.”

When Katy spoke with Conor, it was mentioned that Elinor MacPhail’s former home base, Redtail Ridge Farm, had open stalls. “I was put in touch with Sally Crane, and I was welcomed to come out with my horses to Redtail Ridge. I have the opportunity to ride, train, and teach here, and the community has just been amazing with making me feel welcome.”

Katy settled in for the first time out on her own, having worked hard under both Hawley Bennett-Awad and Buck Davidson until this point. “I decided to do the year of ‘higher education’ on the East coast with Buck instead of diving headfirst into going to Europe, and I feel like I’ve learned so much from both him and Hawley that I can take forward with me with this new start.”

Red Tail Ridge is “almost too good to be true” for Katy, who has hills, trails, schooling cross country fences, and arenas galore for her training needs. “I just couldn’t be any luckier in finding this. I’m so thankful to everyone who helped me find it and get settled in.“

What about Katy’s plans for her first few months as an Ohioan? “My six month plan is to get a truck and trailer, as I don’t have one now and that’s a big hang-up with competing. I plan to work hard and just kind of start from the bottom and go up from there. A year from now, I’d love for this to be my full-time job. I’d love to fill my days with riding and teaching.

I’ve already inquired about taking on more responsibility at the barn with things such as cleaning stalls and horse care, because I want this to be more than just my horses and my business. I want to really contribute to the local horse community here. There’s a Pony Club here that I plan on reaching out to so I can try to get involved with that, and I really just want to make this my livelihood.”

It’s a big move, but Katy’s already made the first big step away from her home in California, and she feels ready to take on this next step. “I’ve always found a way to make things work, and this time is no different. At first, moving to Buck’s, in the back of my head I thought I’d end up back in California.

But it’s kind of like stretching your hamstrings; when you first start, you can’t even touch your toes, and by the end of the year you’ve got your palms on the floor. Now that I made that big step to go East, I feel much more confident and comfortable with going out and spreading my wings.”

You can learn more about Katy by visiting her website, and be sure to check out Redtail Ridge Farm here. We wish Katy the best of luck in her new venture!