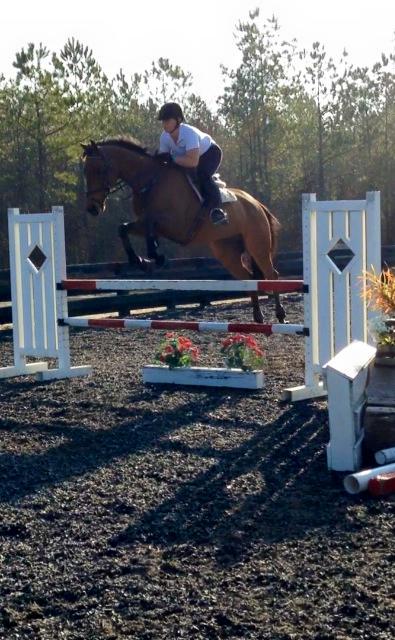 There is something special about the first event of the season.  Whether you are competing at the lowest or the highest of levels, the butterflies in your stomach that flutter while you pack for the first time would make a kid at Christmas seem calm.

I have just returned from my annual trip down to Aiken, and I am riding high on my experience there. Our winter was fairly mild through the end of January, which led to me stepping up and entering Goose in the Preliminary at Pine Top for their spring horse trials.

We were able to get in a couple of proper jump schools, some good fitness days, and even real baths! I thought about how he was last season, having completed four Preliminary cross country courses with minor bobbles which were attributed to rider error, so off the entry went! I decided that he would run slower for his first time out, looking for a good confident run in preparation for the CIC* at Chattahoochee Hills in May. 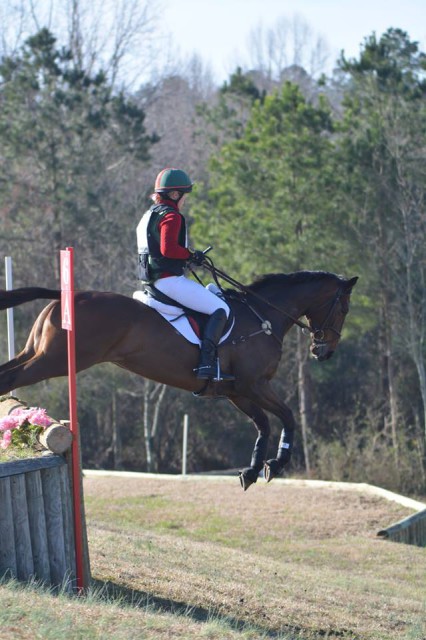 Everything was full steam ahead. I had a plan in place with Jessica Payne for lessons and coaching while I was down there, my friend Liz and her horse were riding down with us, and we were counting down the days.

Then the blizzard hit.  We were instantly buried under 18 inches of snow with weeks of sub-20 degree temperatures; all of a sudden I was questioning my decision. 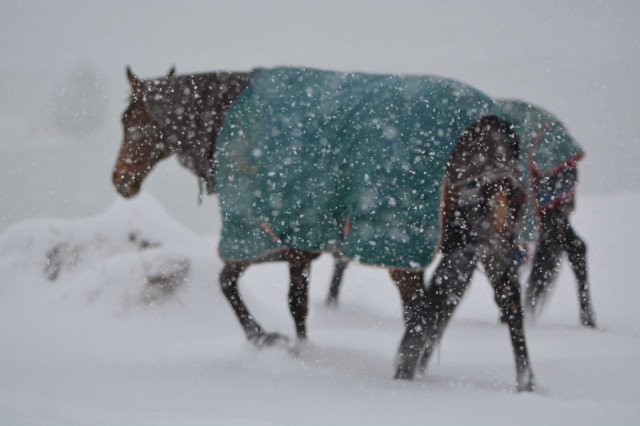 The Blizzard of February 2015. Photo by Courtney Carson.

Thankfully we have a wonderful equestrian community in the area and I got Goose moved to the O’Donoghue’s barn for the three weeks leading up to our trip. I was able to have him in continuous work with the help of their indoor, and I was convinced that he was fit enough to head on down for the Preliminary.

We made it to Aiken and were greeted with sunshine and paddocks for the horses to go out in. The boys were thrilled to have their blankets pulled and to roll in the sand. Liz and I wandered around Full Gallop on Sunday, made it to the jumper show, and then took the boys for a hack. We may have even ended up in shorts before the end of the day. The original forecast of rain all week was looking better by the day and we were excited for a week of growth. 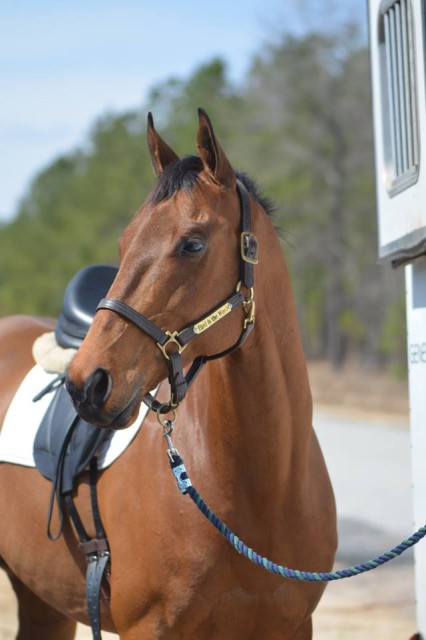 It is always a bit difficult to ride with someone who does not see you on a regular basis. I called Jessica in a panic before Richland last August and she did a wonderful job helping me keep my head on straight and warm up for the event.  I was very excited to actually lesson with her after our hard work since seeing her last.

I was incredibly thrilled with the quality of lessons I received during our week in Aiken. She is a very positive instructor, while being very effective and precise in her instruction. She was quick to correct me when I needed to lower my hands, stay back with my shoulders, or shift my weight on the flat.

She picked out some things to change that I had not been told, or maybe she just said them in a different way, which helped my visualization while riding Goose. He is still very green, having only completed his first event at this same Pine Top just two years ago, and she helped me to fix some of the basics that I lose in trying to make the movements happen.

The entire Payne Eventing operation has a ton of personality, which makes it fun to be a part of, even if for a short period of time. We laughed the entire week — at ourselves, at one another, and at who-knows-what.  My lessons were very serious, and we got a lot accomplished, asking appropriate questions before the event without over-exerting Goose. I was feeling quite ready by the time we hauled over Thursday evening.

Goose in a jump lesson.

Somehow in my excitement of entering the first event of the year I placed myself into an Open division at Pine Top instead of Horse or Rider. Usually this does not bother me, but as I watched the entry status and saw Phillip Dutton x 4, Boyd Martin x 2, Doug Payne, Kim Severson, etc. I was beginning to feel like a very small fish from Illinois in the middle of shark-infested waters.

I was not concerned with where I finished,  because my plan was to go slow on the cross country (first event of the year, condensed into a one day), but I was a bit worried of looking like a fool when I got sandwiched between two professional riders all day.

Goose was a tad bit rusty in the dressage ring, and he still had a bit of the baby-distractedness throughout the test. Overall I was very happy with him and his rideability, Jessica was thrilled with our warm-up and happy with the test, and I was feeling pretty good.  As we sat in the truck before show jumping and watched it rain I began receiving messages from my support crew back in the Midwest.

“Look at you sharing the scoreboard with names such as Severson and Dutton! Did you see Kim’s 15.7?! Is that even a dressage score?” Well, way to build me up and then tear me down!

How was I supposed to go into the show jumping — the phase I am most nervous in — with that hanging over my head? Then I took a deep breath and reminded myself that Kim is a professional, Cross is much more schooled than Goose, and I am just here to have a good, confident run.

I sucked it up and put my tack back on before heading to the ring. I had probably the best warm-up I’ve ever had, and then one of the best rounds of my career.  I still made some mistakes, but thankfully this horse jumps out of his skin for me and I was able to only add some time to my score.

The messages continued to flood in as I walked around my cross country a second time:

“Did you see Kim’s score?  She had a rail and is still under a 20!  Looks like you are having a good day though.”  I love my entire support team — they are amazing. I just had to chuckle while reading some of these messages.

How does one amateur even compete with the legend that is Kim? I continued to walk around and look at the questions the cross country was asking. Once we got back to the trailer, Kim actually walked over to Doug and made some comment about how big the course was. Wait a second. You just scored a 15.7 on the flat, I secretly want to ask for your autograph, and you’re saying the cross country is stout?!  How does one keep calm at this point? 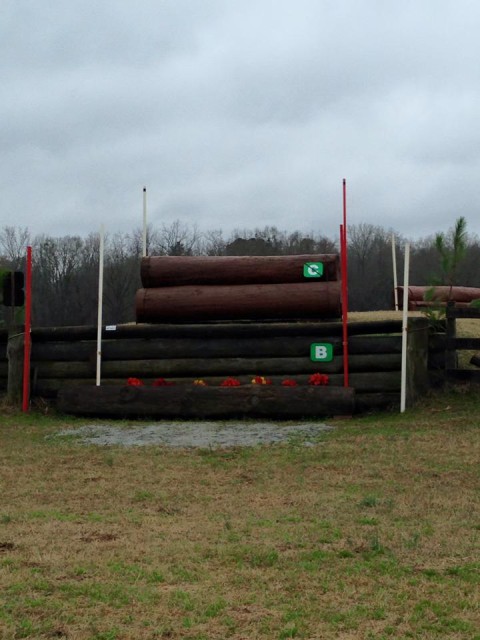 By the time I got to the cross country warm-up I was shaking. I am saying that is from the cold rain that was pelting down, not from any nerves I had. I could hear the announcer following Kim and Cross’ progress throughout the course and I got to see her textbook ride through the water.

As she came through the finish flags, I took one more deep breath and decided I was not the least bit worried about the number on the scoreboard — I wanted to ride like she had around that course. Goose rocked around and answered some very tough questions, and while we had time and I probably didn’t look nearly as good as Kim, we got it done and I am still smiling days later.

It is rare that I get a chance to compete against so many big names, and it was nice to see that I did not make a fool out of myself, or feel as if I did not belong to be there.

At the end of the day , it is all about the partnership between myself and Goose, and when I remembered that I was able to just think about our day. While we did not come home with the blue ribbon, it was our most successful event thus far and I cannot wait to take what we have learned in Aiken back to Illinois and hopefully improve on this result at Spring Bay in a few weeks.