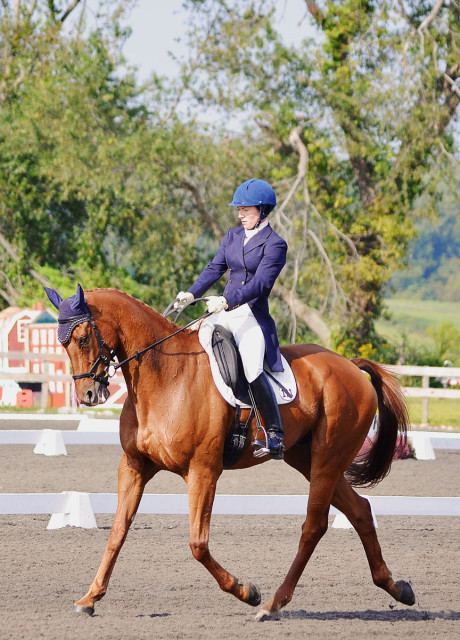 It seemed like no one would catch Buck Davidson and Ballynoe Castle RM in the CIC3* dressage at Plantation Field Horse Trials, as they went first this morning and set the early standard, scoring 47.7 to lead through most of the day. But Kelly Prather and Blackfoot Mystery snuck in to take the lead at the end of the day on a score of 45.0, which beats their previous best score in this test by nearly 8 points.

“I was really happy with the test,” Kelly said. “He’s a great horse and just learning the level. He’s done two Advanced and did the CIC3* at Richland, so he’s green enough, but he wants to do whatever I ask. He stayed really relaxed and rideable today.” One mistake in the half pass kept this test out of the low 40s, but it was a lovely performance and a personal best.

A 2004 17.2-hand chestnut Thoroughbred gelding bred in Kentucky (Out of Place X True Mystery, by Proud Truth), “B” raced three times in 2007 before Lisa Peecook bought the horse and took him to California, where he started his career in eventing. Kelly, a California native who came east to Ocala in the winter of 2013, bought the horse last year. 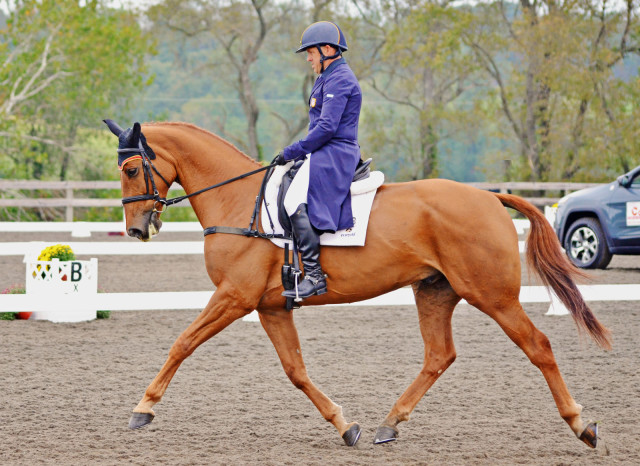 “I’d like a clean round tomorrow (in show jumping), and it depends on what the ground is like” as to whether she goes for time, Kelly said. “He’s a Thoroughbred, so he’s kinda easy to quick on. The goal is Fair Hill CCI3*, so I want a nice, clear round in good fashion.” Congrats to Kelly, and we look forward to seeing much more of her on Eventing Nation.

At the conclusion of dressage, Buck and Ballynoe Castle RM sit in second place on 47.7, and he also has The Apprentice and Copper Beach tied for third place on 48.9 — AND Maya Black and Doesn’t Play Fair are sitting on the same score, also in equal third. Talk about a bunched up leaderboard!

Buck said he was happy with Copper Beech’s test. “He’s only 8 and he won the CCI3* at Jersey Fresh this year, and he was a bit taken back by that, so I took him Prelim after,” Buck said. “I didn’t want to put the pressure on him like Reggie had when he was 8 and second at Jersey and then listed as an alternate for the Olympics. His life was pressure from Day 1.” 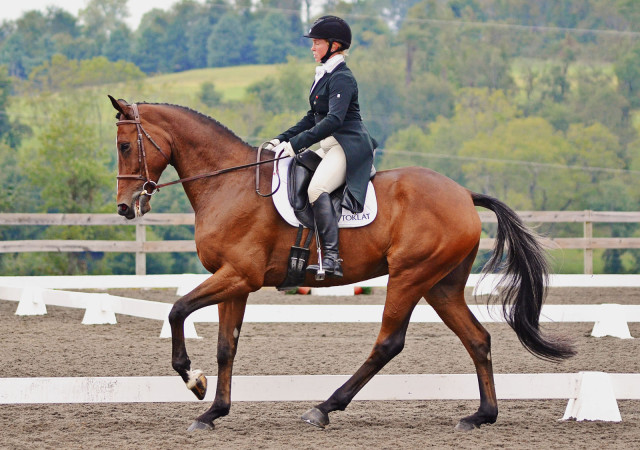 So Buck said he pulled “Sean” back from this level and didn’t think about potentially being listed for the U.S. World Equestrian Games squad. He’s a one-ride type of horse when it comes to dressage, Buck said, so he rode him this morning and hopped on five minutes before his test. “He’s just still 8, and he’s growing,” Buck said, so he’s not in a rush when it comes to the big picture with this horse.

As for Mike Etherington-Smith’s cross-country course — which we posted photos of this morning that you can see here — Buck said, “I think it’s a course that every designer in American should walk. I think we’ve gotten too Mickey Mouse in this country — spinning around and doing circles. You can get into a rhythm, and there’s not some trick out there.

“One thing about Mike is he’s a genius about this stuff. It’s not easy — that’s for sure — but it’s very well presented. You can get in a rhythm and go forward and enjoy this amazing countryside, which we’re so lucky to have. It has a nice feel to it. At some events in America, you don’t even have any idea of where you’re going.” 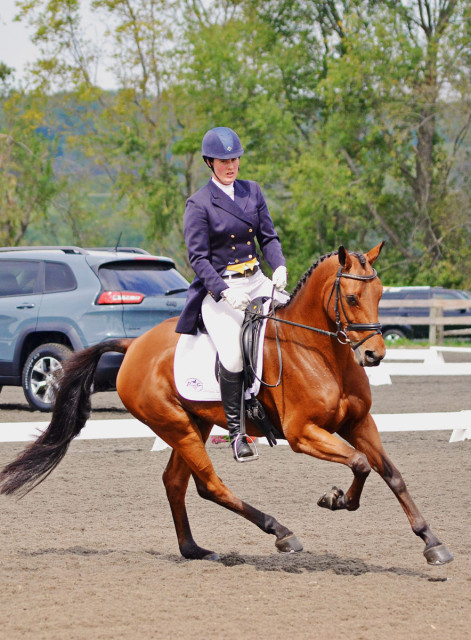 Quite a few riders mentioned to me today that they have their eye on Pacific Northwest superstar Maya Black, and it’s been exciting to follow her debut at the Advanced level this year. She handled a very fit Doesn’t Play Fair today like a pro and is sitting in good company going into show jumping tomorrow.

Colleen Rutledge and Covert Rights are also enjoying a spot near the top of the leaderboard, sitting in sixth place on 50.4, and that would have easily cracked the 40s had it not been for CR feeling his oats — like we’ve seen with many of these horses today. She lost him in the medium, and Colleen said Plantation falls at a point in the season when the horses are so fit that they don’t quite know what to do with themselves.

Come Fair Hill, these horses will be more settled and perfectly poised to tackle the challenging track there — and that’s the goal for the vast majority of these riders this weekend. Colleen is one of the riders hunting for the qualification she needs to run at Fair Hill, and we’ll be sending all the EN karma to her and the others in the same position. Stay tuned for much more from Plantation Field. 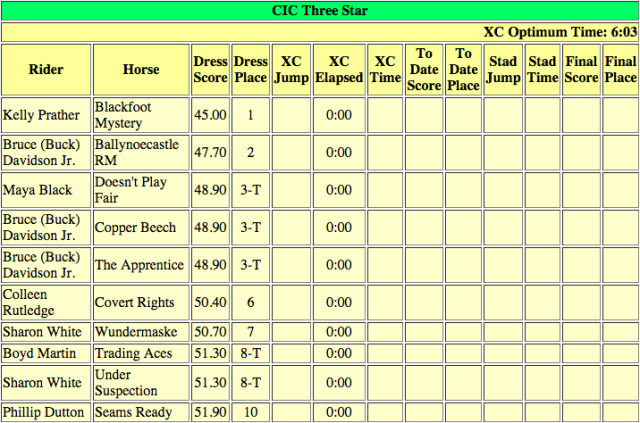