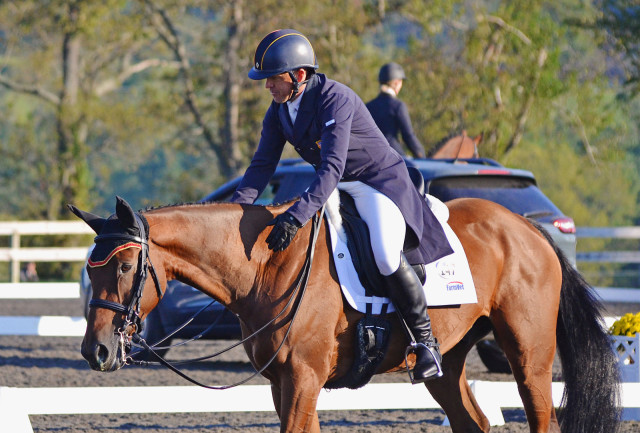 Big pats for Reggie after his test this morning. Photo by Jenni Autry.

This post has been updated with comments from Boyd Martin.

There’s been quite a bit of chatter this weekend about Buck Davidson and Boyd Martin running Ballynoe Castle RM and Trading Aces in the CIC3* at Plantation Field Horse Trials this weekend after both horses retired on cross country at the World Equestrian Games. Buck responded to the criticism in this afternoon’s press conference:

“I’ve had this horse his entire life,” Buck said. “It’s a weird feeling, but it almost feels like he has unfinished business. He’s chewed a fence down (since he’s been back from Normandy), which is something he’s never done before. He’s playing around in the field too much.

“He went the distance of a horse trials (at WEG before he retired at fence 31). He never really caught his breath. He wasn’t exhausted; he was just winded. And within two minutes of walking home, he was fine.

“I hope that I do the right thing every single time, and I’m not perfect. I might jump the first fence and stop. I might make the time. I might not even go. You can’t make everyone happy all the time, but the people who are in the know — the owners, the grooms — are happy that the horses here this weekend are fit and ready to go.

“My job on every single horse is to decide how fast to go and do the best I possibly can do. If I thought I was going to hurt any horse, I wouldn’t go on any of them. I have gone out and had things go wrong; of course I have, and my job is to take care of my horse.

“I see him running around the field and having a good time. He’s not that horse. When it’s time for a break, he goes out in the field, and it’s like he knows” that it’s time for a break,” Buck concluded. But that’s not the case this time around, he emphasized, which is why he’s made the decision to run this weekend. 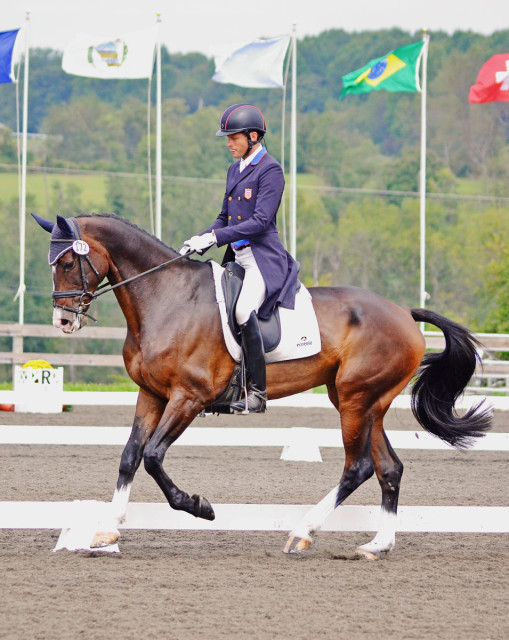 I spoke to Carl and Cassie Segal, Ballyenoe Castle RM’s owners, this afternoon, and they fully support the decision for “Reggie” to run here at Plantation Field this weekend. Kathleen Blauth-Murray, Reggie’s groom, also supports the decision and has flown up from Florida during her vacation specifically to be here.

Boyd Martin also graciously agreed to respond to the criticism:  “Oscar has only done two events since Rolex. One was Great Meadow, and one was 6 1/2 minutes around the WEG cross-country course,” Boyd said. “He’s fully fit, sound and his spirits are high. Obviously I had my vet check him over closely after WEG, and we’re aiming to get him back on track.

“I was considering putting him in the Intermediate here, but my coach Phillip (Dutton) said he didn’t think there would be any benefit in doing that to get him going again. In the back of my mind, I definitely haven’t given up on this horse.

“I think depending on how everything goes (at Plantation Field this weekend), I’d probably go back and do a three-star on him, either at Fair Hill or Galway Downs, just to make it easier on him to get going again.

“At the end of the day, he got sick of the big jumps and mud at WEG. He didn’t collapse or anything like that. Part of all this is being a horseman. I’ve thought long and hard about it, and I ultimately believe there would be no benefit to putting a fully fit and sound horse out in a field for a couple months.”

Draw your own conclusions, EN. All I can say is that both horses looked in the zone and ready to go today during dressage. The best vets in the country have cleared the horses to run this weekend, and they both have incredibly devoted teams attending to their every need.