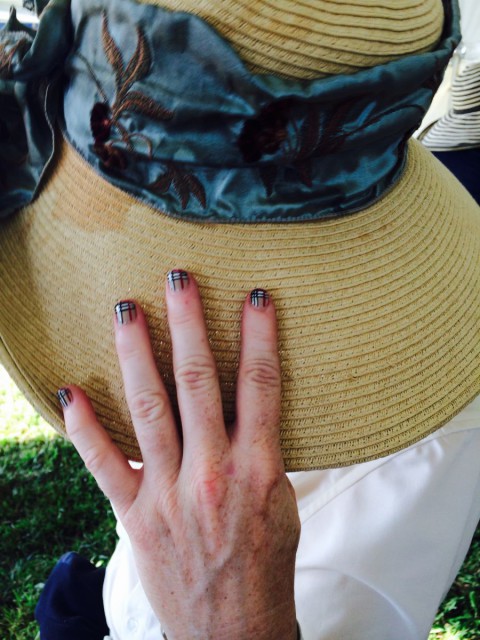 Which two-star leader saw these Burberry nails on Pinterest?

Kim Severson and Cooley Cross Border, Marilyn Little and RF Scandalous, and Buck Davidson and Be Mine are all sharing a three-way tie for the lead on a score of 42.4 in the CIC2* at Plantation Field Horse Trials.

We talent spotted Cooley Cross Border long ago on EN’s Got Talent, and he certainly lived up to expectations today, though Kim said he spooked at the flags that line the main arena, which surprised her.

“He is amazingly weak being only 7; he still has a lot of holes,” Kim said. “There are a lot of things that will in the future not be missed because he’ll be more rideable. He’s a good boy, and he won’t do anything wrong. I just don’t have a lot of control over what happens (in dressage) right now.”

In regards to Tremaine Cooper’s CIC2* cross-country course, Kim said she’s more worried about the Prelim course, which is pretty intimidating for the level. “The two-star course is good; I like it,” Kim said. “There’s a couple places where it’s sort of hard to know how it’s going to ride with striding.”

Kim thinks the gate on the way out of the Stonehenge complex, which has caused quite a bit of buzz in the barns so far this week — is a hard question for the two-star horses. “I’m lucky because he looks for the jumps and is good like that,” she said.

Kim is settling in after just returning home from the World Equestrian Games in Normandy with Fernhill Fearless, where she picked up 20 penalties on cross country but jumped a beautiful clear round in show jumping the next day — one of just a handful of clears.

That’s made even more miraculous by the fact that “Sparky” has ultimately been diagnosed with a broken coffin bone, which sounds much more serious than it actually is in reality. “He was sound by the time he got home,” Kim said. “He’s totally sound now, and he’ll have his regular holiday.

“I’ve had horses with this injury before, and they come back just fine. It’s much better than a tendon or suspensory … He’s amazing. To jog up and do show jumping with a clean round is pretty amazing.” What a trooper! We’re sending our best wishes to Sparky.

Marilyn Little led overnight after the first half of two-star dressage yesterday, and the performance was good enough to still put her at the top of the leaderboard today with Scandalous, AKA Kitty, who Marilyn named herself after importing the mare from Germany earlier this year.

As for the name, Marilyn said she picked it “because it seemed appropriate. You talk about armchair quarterbacking — that’s been since the day I walked into the sport. It’s for all the people out there who just have things to say.”

This is a very new partnership for Marilyn, and she said “Kitty” can be extremely sensitive. “We’re working out a few things like how to get the bridle on,” Marilyn said. “It takes imagination. Also, picking up the canter with the inside leg — things like that you think isn’t a big deal.”

Marilyn said she was pleased with the test, though she knows she left a lot of points on the table. “She’s smart, so she’s very open to learning. In dressage, she’s very much a professional,” Marilyn said. In contrast, the jumping phases have historically presented the most challenges for the mare.

Marilyn’s plan is to find a rhythm early and keep the mare settled in the start box on cross country. “She wants to be good, and she wants to do it right. If she were a human, she’d be nervous before the test, but not during the test.” So Marilyn will work on making the start box a positive experience.

Buck Davidson said he was very proud of how Be Mine handled his test today. “He’s got a lot of talent and has a pony attitude every once in awhile,” Buck said. “I was a little nervous with the wind; I thought he might buck me off. It’s a big atmosphere for him, and it’s a hard test for a baby. He really kept trying and kept trucking.” 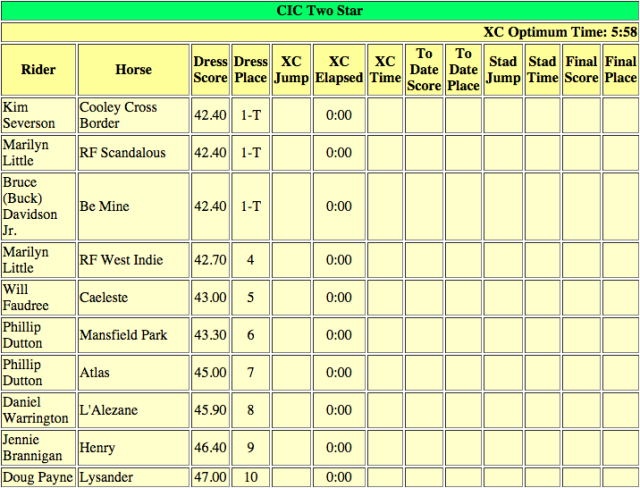