Kelly Utter wrote this blog for CANTER Mid-Atlantic on her own site, where she chronicles the journeys of various retired racehorses. Kelly is a volunteer and board member with CANTER and tries to bring the racehorse re-training experience to life for other members of the equine community through sharing photos and blogs online. This one, although sad, reminds us of how special horses really leave marks on our hearts and how important it is to know when to say goodbye. Thanks to Kelly for writing and sharing this piece, and thanks to you for reading. 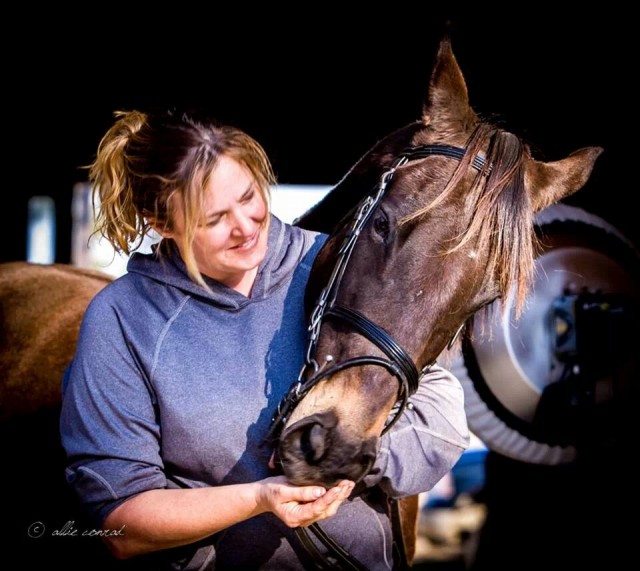 Allie and Mikey together. Photo courtesy of Allie Conrad.

MIAMINEEDSAHALO dueled for a half on a short lead, widened around the turn, drew off through the stretch under a drive.

Miamineedsahalo, Mikey as he’s come to be known, was 3 years old. It was his first win in six starts. In the history of cheap claiming races at Charles Town, it was an everyday occurrence, the kind of thing most people noticed only long enough to check their tickets and cash their bets. It also changed the world. I realize that might sound a little dramatic or overwrought, but it really did.

See, some horses seem to exist at junctions. They are joiners, connectors and without really trying, they set great things in motion. That night at Charles Town, when the little brown horse shoved his head down and drove to the finish, he was connecting with a person who is just like him, the director of CANTER Mid Atlantic (then CANTER West Virginia) Allie Conrad.

For us volunteers and friends, what happened that night has reached a sort of mythological status — it’s part of CANTER’s creation story, and as such, some of the details may be wrong and may have grown in significance in our minds. And that’s OK, I think, because the ripples that were sent out that night have grown and grown into something huge and wonderful. Up until that time, CANTER was a listing service. Allie’s fated introduction to her amazing boy Phinny is what started her involvement with CANTER.  Her meeting with Mikey would shunt her along an entirely new path.

Mikey didn’t just win a race that night. The little horse, with his slightly roman-nosed head, broad chest and compact build, did it with a broken bone. Somewhere around or coming out of the far turn, there was a stumble or a misstep. A moment where his stride faltered ever so slightly, and it may or may not have been apparent that something was wrong. What actually happened was that he broke a small bone in his ankle and kept on plugging. It might have been endorphins and adrenaline and overwhelming instinct that kept him running, but those of us who have gotten to know Mikey tend to think it was something bigger. Mikey, for his small stature and short little stride, has the heart of his ancestors. He has will and an almost stubborn nature, and even though I wasn’t there, I feel … no, I know, that it was heart and will and determination that carried him forward that night. 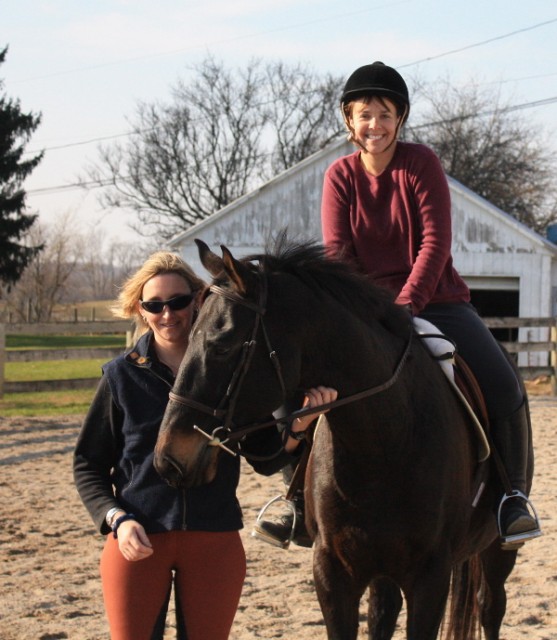 People who romanticize Thoroughbreds and racing talk about heart a lot. People who haven’t been around horses tend to dismiss that because they’ve never experienced it.  But we know better — we know it when we see it; we know it’s what elevates even the most common bottom-of-the-barrel claimer to something pretty amazing. And we know that within each Thoroughbred lies a little spark, a will and the fighting spirit of long gone ghosts like Man O’ War or Secretariat. They don’t always bring it out at the track, but every Thoroughbred has it. Mikey had it that night, and his determination caught Allie’s attention.

She also knew something went wrong, and it didn’t take long to find out how badly. I don’t know all of how this went down, but I know that Mikey was going to be sent on, his connections not wanting to do the rehab work (unwilling or unable to see the greatness in his effort), and his life was very much at risk. That couldn’t happen. And when she sobbed to her then-boyfriend John that he couldn’t, just couldn’t, go to the killers, he agreed and helped her to buy him. For a couple hundred dollars, Mikey’s value was recognized and cherished, and his life saved. Allie had met a horse who would inspire great work and came to know that this man who she loved, she really, really loved, he would be her soulmate and partner forever.

Mikey became the first horse CANTER brought in for the rehab/retraining program. So what if he would never leave us? For CANTER, he is our Secretariat, our class clown and our best friend. Volunteers would help Allie with his daily care, giving him attention, wrapping his legs, and simply offering him love and recognition while he was on stall rest. At this point, I hadn’t even become involved with CANTER; I knew of it and knew Allie, but stopped by to meet her while I was searching for a new boarding farm for my horse. I met Mikey too then and didn’t yet know much about him or that he was one of the most special beasts on the planet. 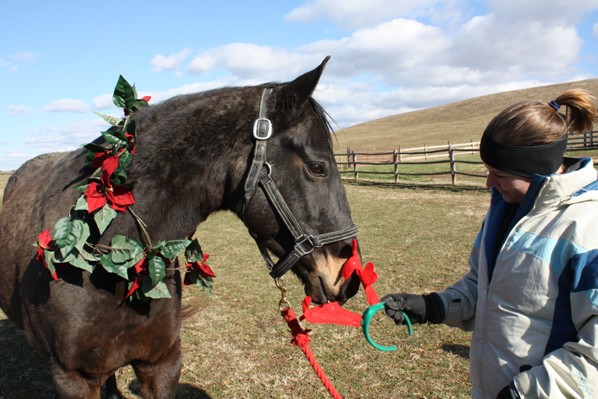 Mikey helping with a Christmas photo shoot for CANTER. Photo by Kelly Utter.

Taking Mikey in led to an expansion at CANTER Mid Atlantic. Soon, horses were coming in and finding a soft place to land where there might not have been one before. Later, CANTER would expand even more, adding the Delaware program, taking even more horses and getting a really amazing training program going, ultimately finding great long-term matches for hundreds of horses. Would this have happened without Mikey? I am sure it would have. But he was one of the sparks.

His personality was what would kill you. He was hilarious — he loved attention and treats and had a way of communicating exactly what he wanted in ways that were impossible to miss. Namely, he wanted you to brush right there, just so. And he wanted to stay with you forever. Every time we’d go to bring him in, he was the horse who would call to us and come running. Getting him back out in the field after a grooming session often took multiple people. So we took him at his word and brought him in for some work.

He came with us to Southwind, where we started riding him (which he loved, despite some stiffness and mechanical lameness from his old injury). We rode him western; we took dressage lessons. He approached every new thing with the same head-down-and-determined way he won his last race.  Sometimes he would shake his head about, reminding you “forward please!” and to get your leg on. He very much enjoyed his horsey yoga sessions with our dressage trainer, grunting and huffing with pleasure when a little lateral work released some stiffness or tension in his body. He didn’t much see the point in jogging out on the trails, preferring long-reins meandering or an all-out run through the hayfield. Mikey was the horse that brought you back to childhood — he was the opinionated pony that you had a blast with no matter what you were doing. He was the poster child for us, the horse that kept us happy and kept us going.

When I had my first experience with euthanasia and stood cradling a horse’s head in my arms — a horse who would be dying far too young at 3 — it was Mikey who reassured me after. All along, he’s played comforter for all of us, particularly Allie, reminding us all that things are OK. When things are hard emotionally, or when there’s stress over how things are going (whether worrying about money or logistics or whether it’s all worth it), Mikey’s been the constant who could always cheer us up and make us feel good about moving forward. 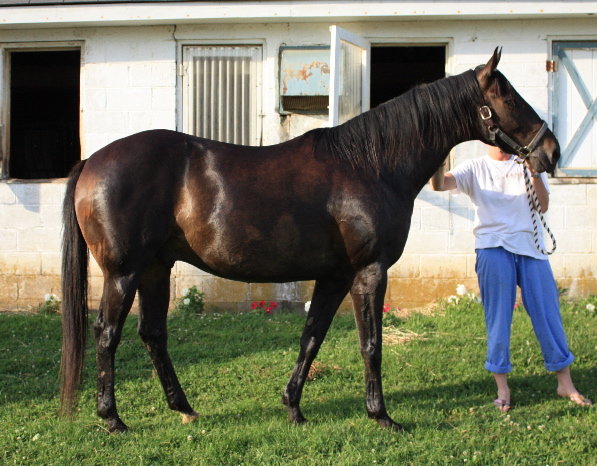 So for something to be wrong with Mikey, it’s like the world tilting on its axis.

Allie got a call several months ago that something was very wrong.  It turns out that something was EPM — he had major neurologic symptoms and is having trouble controlling his hind end. True to form, he was frustrated and angry at things not working right, and Allie had some hard thinking to do about balancing things like prognosis, budget and what was really in his best interest. Because he’s Mikey, and because he occupies such a huge space in our hearts, Allie went ahead with some treatment, which seemed to have a positive effect for a while, and gave him a good quality of life as he moseyed around Allie’s farm. But more recently, he’s taken a turn for the worse, and it’s become apparent that there is only one right thing to do, and that is to free our most gallant, courageous, sweet friend from pain and difficulty, and let him go.

Mikey came into Allie’s life almost 10 years ago. As we approach a decade of taking in horses after their racing careers and finding them new homes and lives, please take a minute to thank this wonderful horse, thank the universe for bringing him and Allie together, and also to think about the horses who have changed your own lives for the better. May they all stroll through fields like these forever.