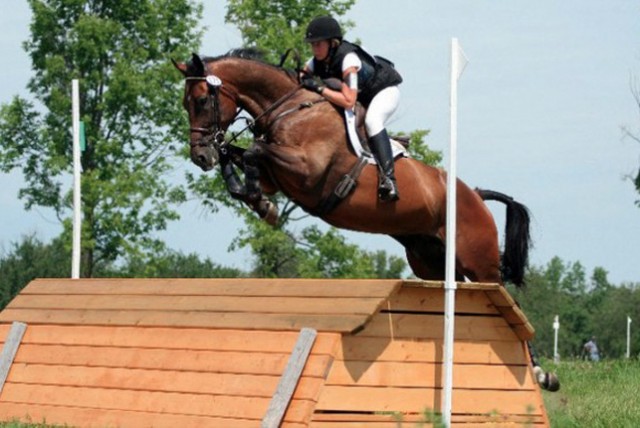 Last month, Kendal Lehari made the difficult decision to retire her upper-level mount, Daily Edition. Together, she and the chestnut OTTB gelding were short listed for the Canadian Eventing Team and had their eyes firmly set on the World Equestrian Games in Normandy this year. As is always the case with horses, though, Kendal has had to take a step back and assess her current situation now that “Ed” is enjoying his retirement. Fortunately, Kendal has another superstar in the making: a 9-year-old OTTB named Totally Frank.

Kendal acquired the ride on Totally Frank from her mother, who had taken him on as an eventing prospect from the race trainer she worked for. “We originally picked him up as a sale project, but we decided to keep him because he was such a sweet jumper and showed a lot of potential,” Kendal said. Kendal’s mother, also an event rider, suffered a back injury previously that makes it difficult to ride sometimes, so Kendal took over the ride once Frank was ready to move up to Training level. 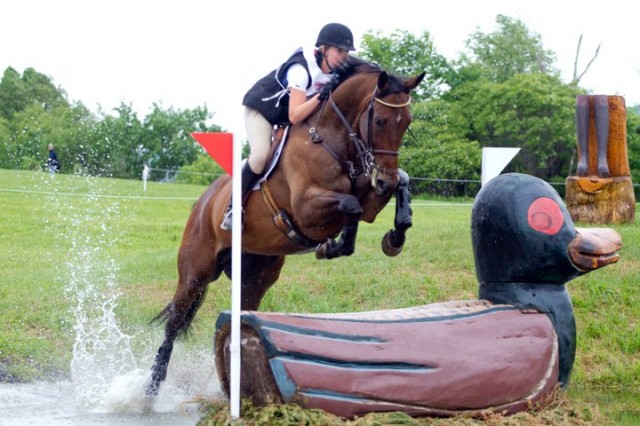 Frank progressed quickly, running his first Intermediate as a 6-year-old in 2012. Kendal sustained an injury after that, forcing Frank to the back burner for awhile, where he focused on flatwork and dressage. Kendal brought him back out this year, running the Intermediate at the Ocala Horse Properties Winter II HT, and then moved him up to Advanced at Rocking Horse, where he added only time to his dressage score and placed 14th. Kendal and Frank then placed third in the Advanced division at Red Hills last weekend, and Kendal is confident in Frank’s abilities to continue moving up.

“I think the jumps are finally getting big enough for him!” Kendal said. While Kendal was short listed for the Canadian Eventing Team with Daily Edition, she realizes that catching the eye of the WEG selectors this year is a long shot. “It’s tough to get a three-star horse noticed. The long shot plan would be to use Jersey Fresh as his three-star qualifier, and then we would technically be qualified for WEG. That would be a perfect world outcome, but I am focusing more on the Olympics at this point.” 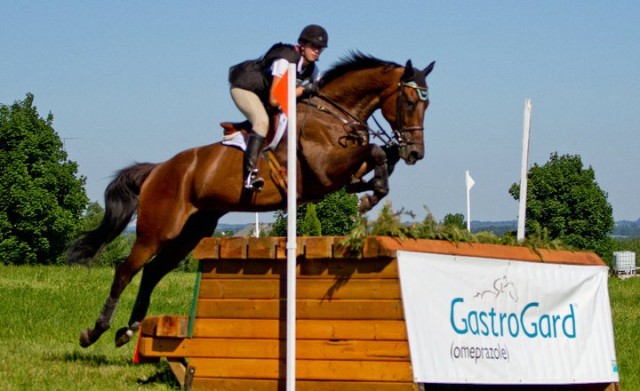 Kendal and Totally Frank competing at Dreamcrest in 2011. Photo by Tristan Lehari.

Kendal plans to do Rolex next year with Frank and will continue campaigning him at the Advanced and three-star level this year. “He is young and unproven at this point, so he really needs to go and do some international shows. (The selectors) really need to see him perform well, scoring in the 40s at least, so I want to really focus on getting him competitive right now.” Kendal would like to head over to Europe to compete and has begun planning her fundraising efforts to make this trip possible.

Meanwhile, Daily Edition is enjoying his retirement, although Kendal is open to the idea of leasing him out to someone who wants to get some experience at the lower levels or perhaps in the jumper ring. “He may be better suited in the jumper ring since he is difficult to ride on the flat, but I will figure out a plan for him next year. Right now he is enjoying his break.”