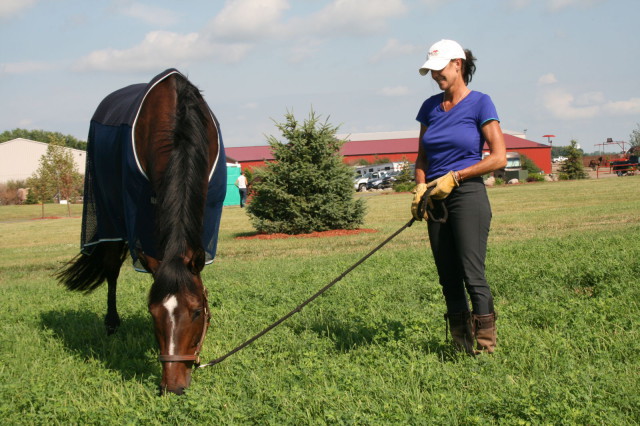 La Batt Blu, an 8-year-old warmblood owned by Kendel Torrel of Monticello, Minnesota, would probably have preferred to graze on fresh alfalfa a short distance outside his stable on Friday the day prior to when he would compete in dressage and stadium jumping at Roebke’s Run. Torrel gave him quite a bit of time on the field before deciding it was now time to head back because she wanted to keep his weight down.

Torrel, who says with a smile that she’s “not yet 50,” has been competing in Eventing for about 10 years at different levels. She’s been training La Batt Blu since he was a colt.

“He (La Batt Blue) ran Prelim a couple weeks ago in Illinois for the first time and he did really good, but he’s running Training this weekend. I walked the cross-country course earlier, it looks so fun. Roebke’s Run is one of my favorites, I love coming here,” said Torrel.

She likes competing in all three disciplines, but like many other riders said she especially enjoys cross-country. She said a facility like Roebke’s Run for Area 4 is top notch because it’s got sand arenas, decorated jumps, nice stabling and more, and she credited the Schweiss family for the time put into it, which she said can’t be easy. 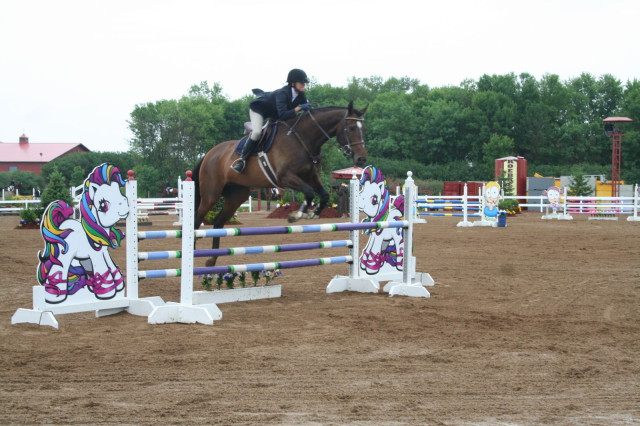 Kendel Torrel and La Batt Blu, easily cleared one of the many decorative Stadium jumps at Roebke’s Run. They placed third overall in the Training Horse Division.

“I had a horse as a young girl, I think a lot of people like the adrenaline rush of Eventing. For me, bringing a horse along from nothing is very satisfying,” said Torrel. “I bred and raised La Batt Blu from a colt, it has a lot of satisfaction for me. He’s a good horse and has done real well, he’s only been training about a year now and is real brave and always game.”

La Batt Blu is now her main man. She sold her mare, Badlands Echo, to a little Minnesota girl who has done incredibly well and was in Georgia competing this same weekend.

“I have a young horse coming up from that mare, that will be my last one, then I’m done, then I don’t know what I’m going to do. What am I going to do?”

The answer to that question is that she will probably gain additional satisfaction from training another colt to competition level. Down the road Torrel would like to see La Batt Blu compete more at the Preliminary level. “I won’t push him past Prelims, that’s a big step from the Training level,” she concluded.