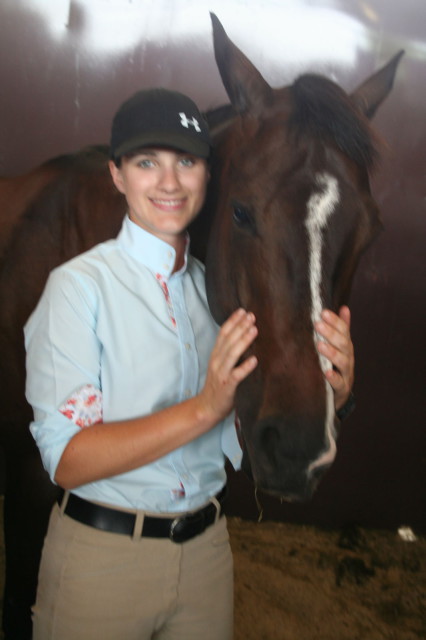 Samantha Bell and her thoroughbred off-the-track horse, Tango, are in their second season of Eventing and making an effort to learn the ins and outs of the sport.

Samantha Bell, 24, of Davenport, Iowa credits her OTTB,Tango, with being very brave with a brilliant mind who is used to natural fences. That’s a pretty good resume for competing in cross-country. Tango is also quite fast, and recorded the lowest time in cross-country at Roebke’s Run.

Bell and Tango competed in the Open Novice Division for the first time this weekend at Roebke’s Run. “He’s consistent in Dressage and good through Cross-Country. He is still very vain in learning what all comes with Stadium. He doesn’t have as much respect for small poles as he does with a solid fence, he knows that the solid ones don’t move, so we’re still learning respect for the little fences,” noted Bell.

Bell only recently started Eventing, she is in her second season, having participated in four last year. She expecting to go to six this year. She’s qualified for American Eventing Championships in Texas but isn’t sure she will go, mainly because she’s currently Eventing to gain more experience. She will be going to Richland, Michigan Horse Park and a few other big venues to get additional experience. 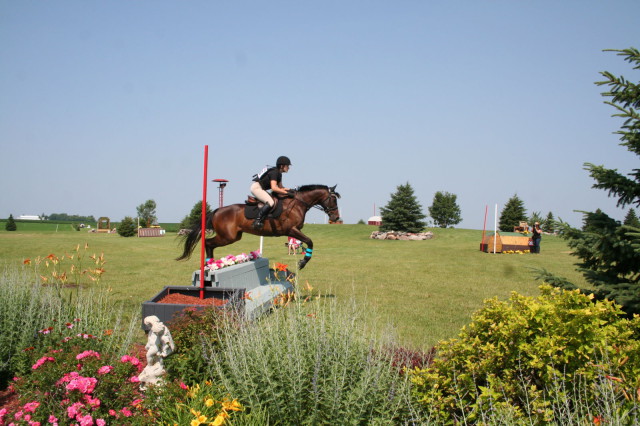 Tango and Bell clear one of the early cross-country jumps at Roebke’s Run. She made a return visit here after competing for the first time last October. They placed sixth in the Open Novice division.

“I got into Eventing through my trainer, Susan Daufelt, who actually got me started in fox hunting. When I started riding with her I didn’t know much about riding hills because I’m from near Chicago. She got me out doing cross-country and eventually into the Eventing world,” explained Bell.

She says her strength currently lies in Dressage, but says Cross-Country is more fun. She walked the course prior to competition. “I like it, it’s a very beautiful course with good questions, technical with a variety of different terrain from working through the trees to open fields, ditches and a lot of different type jumps that you really have to think about and work together with your horse to get through,” said Bell.

Bell had nothing but praise for Roebke’s Run. “It is one of the most friendly disciplines I have ever ridden in and a beautiful area that is taken very good care of. The Schweiss family is extremely kind,” she said. This was Bell’s second time at Roebke’s Run, having competed in the Beginner Novice division last fall. Her goals are to work her way up the levels to give her horse confidence to learn the ins and out of the sport.

She knows she has a lot to learn and is relying on helpful advice from Jamie Price and Hannah Ross-Jungling who have taught her a lot already. They were also at Roebke’s run competing in the Open Intermediate and Open Preliminary levels. Price placed second in her division and Ross-Jungling was third in Open Prelims.