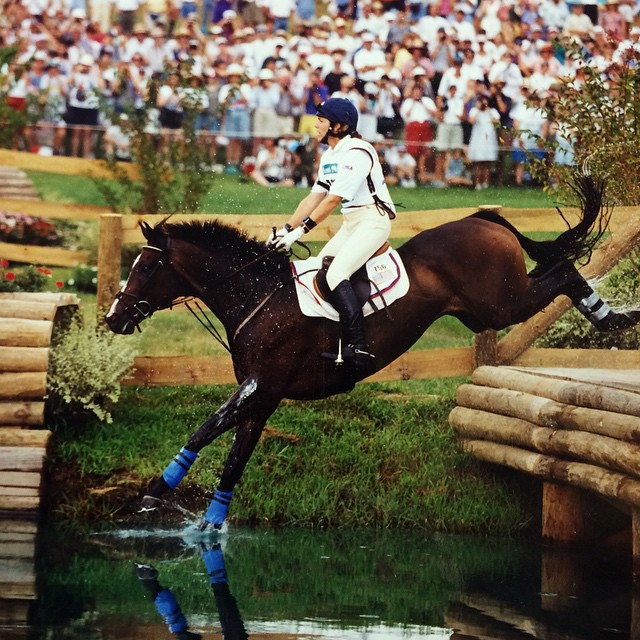 Kerry Millikin and Out and About at the 1996 Olympics in Atlanta. Photo via Dean Graham / USEA Archive.

The U.S. eventing community lost a legend this week, as Kerry Millikin’s 1996 Olympic partner Out and About, one of the greatest Thoroughbred event horses of our time, was humanely euthanized Wednesday at 28 years old due to the complications of old age.

Together, Kerry and “Outie, a 1987 off-track Thoroughbred gelding by L’Amour Rullah out of Incarnadine, represented the U.S. as individuals at the 1996 Olympic Games in Atlanta, where they won individual bronze. They competed on the U.S. team at the 1998 World Equestrian Games in Rome, where they finished 15th individually and won team bronze.

Outie won his bronze medal at the Olympics at the young age of 8, showing poise and class in a performance that Kerry will always remember. “When we finished (showing jumping), the crowd realized we had won bronze and the applause just exploded,” Kerry recalled in this story. “And Outie took off around the ring. That was a moment I’ll never forget.”

Kerry and Outie competed in the Open European Championships at Burghley, finishing seventh in 1997. They also finished third at Badminton in 1999, adding one more accolade to a long list of achievements. Kerry retired Outie in 2000, and he lived out a long and happy retirement in a 90-acre field at her farm.

We are deeply sorry to hear of Outie’s passing. Our thoughts and condolences are with Kerry, Liz and the entire Millikin family, of which Outie was a treasured member for 25 years, ever since coming off the track as a 3-year-old. We will always remember the triumphant moments this pair achieved together.

Rest in peace, Out and About, a true legend of the sport.